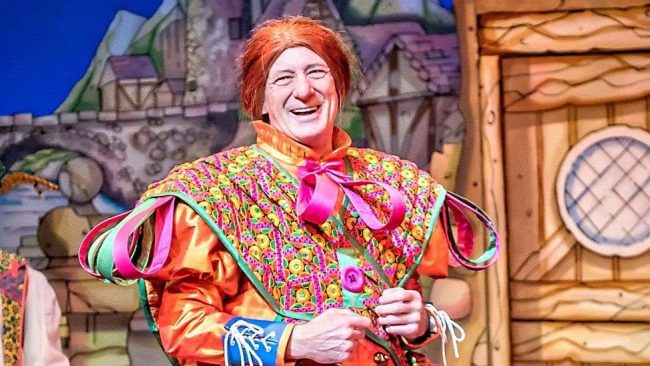 THE mum of panto dame Berwick Kaler’s ‘biggest fan’ has thanked members of the audience and Grand Opera House staff who came to his help when he suffered an epileptic seizure while watching Old Granny Goose.

Ben Greenheld, 34, who has epilepsy, learning difficulties and autism, suffered a seizure within ten minutes of the show starting on December 23.

The panto was held up for about 10 minutes while Ben’s mum, Karen, tended to him with the help of a mental health nurse sitting next to them – and some of the theatre’s front-of-house staff.

“I need to say a massive thank you to the whole audience, but especially to front of house Rachael and Eleanor and the lovely lady at the side of us – she was amazing!” Karen, from Tadcaster, said.

He looks forward to the pantomime every year – and keeps all Berwick’s past programmes, as well as pictures, at home.

He writes letters to Berwick – and even sends him Christmas cards.

A few years ago he met his hero in person, after suffering a similar seizure while watching the panto.

That was in 2018. Berwick rushed to comfort Ben when he suffered a seizure after the pantomime, then at the Theatre Royal.

The following year Berwick invited Ben to watch a special show, ‘An Evening with Berwick Kaler,’ as his guest in a box at the Theatre Royal. He even posed for a photo with Ben and his mum.

Karen said it was only about ten minutes into Old Mother Goose on December 23 that Ben suffered a seizure this time. He started shaking and jerking and going blue in the face.

The performance was quickly stopped. With the help of the mental health nurse sitting next to her, Karen gave Ben some medication she always carries, and eventually – after theatre staff consulted with her – the show was able to resume.

Karen took Ben home.He quickly recovered. “But all he could say was ‘I missed Berwick!” Karen said.

Karen apologised to members of the Grand Opera House audience who had their show interrupted.

“I can’t believe they had to stop the show!” she said. “It was awful. I felt so bad! But the people at the Grand Opera House were really good.”

Berwick told The Press he was ‘delighted’ that Ben had made a good recovery.

He had realised early on that there was a problem – and he recognised the family, who were sitting in the front row.

He praised the audience for realising that there were some things which were more important than a few laughs.

And he added: “I just hope that for the few minutes before he had the seizure, Ben was enjoying the show! If I can bring a bit of happiness to anybody, that’s what matters.

“I hope what happened doesn’t stop him from coming to future pantomimes!”