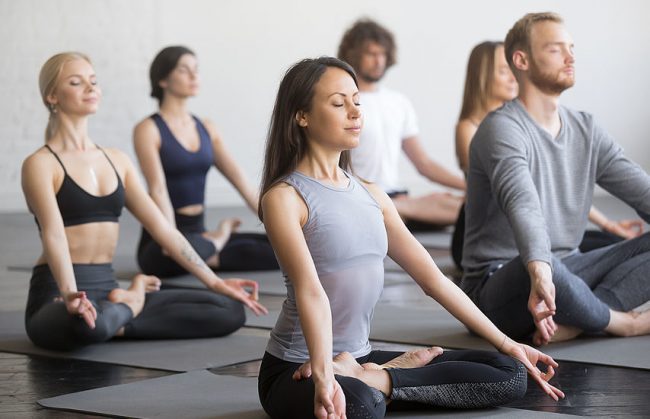 Yoga For Epileptic Patients: Know Its Benefits And Risks

Experts state traditional yoga and hot yoga can be a good therapy for epileptic patients. Read more to know all about its benefits and risks.

There are various types of yoga that have numerous health benefits. According to experts both traditional yoga and hot yoga can help reduce seizures in epileptic patients. We all know what traditional yoga is but what is hot yoga? This is a vigorous form of yoga that involves practicing in a hot and humid room. Epilepsy is a neurological disorder characterized by repeated seizures. Both of these forms of yoga can reduce stress, which is a seizure trigger for some people with epilepsy.

Experts state that yoga can never be the permanent treatment for epilepsy. However, yoga helps reduce stress and anxiety. The main trigger of an epileptic seizure is usually stress and anxiety. So, researchers have theorized that it could be a potential therapy for epilepsy. If yoga asanas have an impact on the reduction of stress then maybe the seizures will also begin to reduce.

WHAT DO THE EXPERTS SAY?

So far there have been differing opinions on this therapy from researchers as well. A study conducted in 2017 states that there is not enough strong evidence regarding the effectiveness of yoga as a sole intervention for epilepsy and that people should only consider the practice in combination with antiepileptic drugs. On a different note, another review of 2017 also stated that yoga, especially hot yoga can be a good complimentary therapy for patients who are also taking an allopathic treatment for neurological disorders.

Hot yoga or Bikram yoga is a different from traditional yoga. It is practiced in a hot and humid room and this actually helps free the mind from any other thoughts. It is challenging but also rewarding.

Hot yoga has been shown to reduce the amount of cortisol that gets released, which, in most cases, results in reduced stress levels for practitioners. While cortisol is helpful when dealing with stressful situations, too much cortisol is not healthy on a daily basis. It can do things like impair your ability to learn and memorize, reduce the body’s immune function, increase blood pressure and cholesterol, result in weight gain and increase the chance of depression. Managing your stress through Bikram yoga can reduce these negative effects of cortisol and help you focus more energy on other healthy habits.

Hot yoga can be intense and vigorous. The focus and strength that it requires automatically draws people’s attention to the activity that they are doing. Being distracted would mean that you are not focusing on the activity and you might not be doing it right either. The positive ramifications of this not only include improved focus during class, but also an improved ability to focus during day to day life.

Few things impact our lives more than sleep. Being able to fall asleep quickly and getting enough quality sleep truly does recharge your batteries for the next day, which impacts every area of your life. It’s hard to show up to work, school, or other responsibilities and perform to your fullest abilities when you’re running on empty. Many find that regularly performing exercise and sticking to a routine helps them fall asleep faster at night, and regulates their sleeping patterns for more quality sleep over time.

By going to yoga intense classes consistently and becoming stronger against the heat, humidity and movements, you teach your brain that you can get through tough times again and again. This is also a skill that applies to other areas of your life. Whether it’s pushing through a tough project at work with ease, or finding a renewed passion for your long-term goals, hot yoga can help train your brain to overcome both physical and mental obstacles.

RISKS OF HOT YOGA THAT YOU SHOULD BE AWARE OF

Hot yoga is more intense and rigorous than traditional yoga. Because of this reason you should be cautious while you practice it. Hot yoga can lead to

TRADITIONAL YOGA AND ITS BENEFITS ON EPILEPTIC PATIENTS

According to a study conducted in 2021, traditional yoga also has an impact on neurological disorders such as epilepsy.