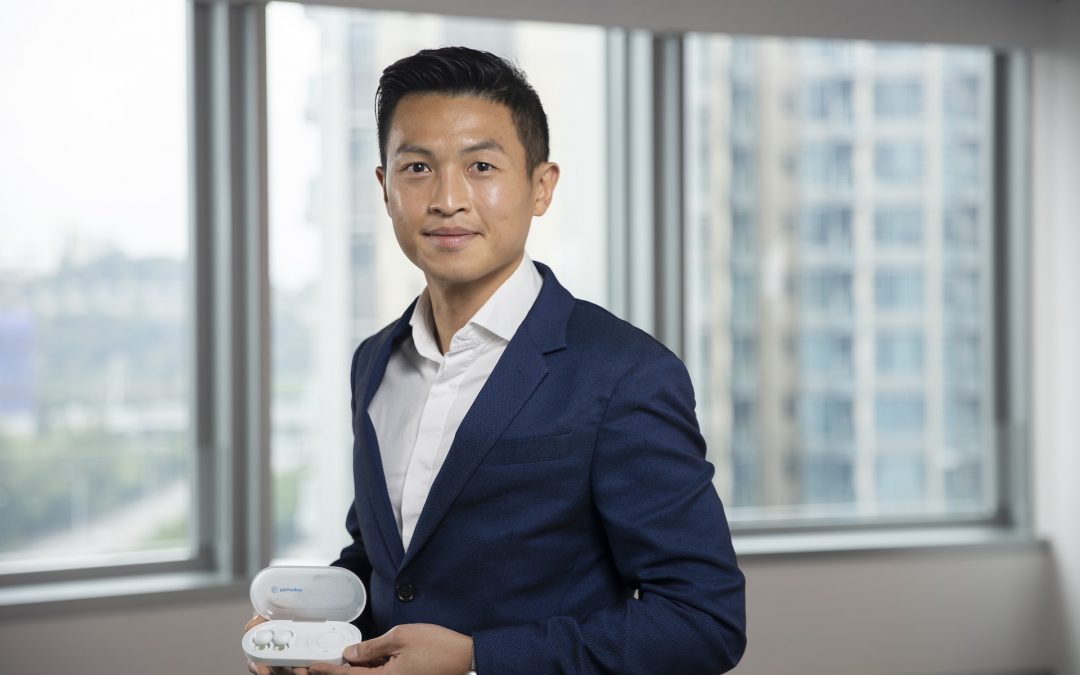 More than one in five people in Hong Kong suffer from neurological disorders, which range from migraines and depression to epilepsy. Such conditions have typically been treated with medications, but they are not always effective – for example, anti-epileptic drugs help control seizures in around seven out of 10 patients.

In 2021, Neuropix was named one of the award winners in the Open Group of the City I&T Grand Challenge, organised by the Innovation and Technology Commission (ITC) together with Hong Kong Science and Technology Parks Corporation (HKSTP). The competition seeks creative solutions to transform Hong Kong through innovation and technology, with entries open to primary schools, secondary schools, universities and the general public, both locally and worldwide.

Neuropix, which won the Innovation Award, has since seen its idea evolve into a real-life product. This new product provides a treatment called tVNS – which stands for transcutaneous vagus nerve stimulation – and consists of a medical device with wireless electrodes to be worn in the ear. It uses electrical pulses to activate small nerve fibres inside the ear, and those in turn stimulate the vagus nerve, a key component of the nervous system that transmits important sensory and functional signals between the brain and body.

Neurological disorders often involve an imbalance in these signals, which are associated with symptoms such as epileptic seizures. The tVNS treatment helps reset the balance of neurotransmission in the brain.

The clinically developed tVNS treatment offers a solution for people who have been living with drug-resistant neurological conditions. It also helps patients who are using medications to manage their condition, as tVNS can supplement drug treatments without major side effects.

Neuropix is currently exploring further use of tVNS as a potential treatment option for neurodegenerative disorders associated with ageing, such as Alzheimer’s disease and Parkinson’s disease.

Ko, a neuroscience specialist, found his initial inspiration for the device while working in the UK, France and mainland China with some of the global pioneers in neurostimulation. The earlier treatments he learned about required surgery to implant devices that would electrically stimulate the nerve fibres.

However, not every patient was suitable for such surgery, and many did not want to undergo an invasive procedure. In addition, the existing neurostimulation devices were rather large and had wires attached, which could be burdensome for patients. So Ko wanted to find a way to make neurostimulation treatment more accessible to people on a mass-market level.

The Neuropix team focused on designing a smaller, wireless and portable medical device. “We developed a non-invasive, wearable application, which still delivers electrical pulses to key fibres, but it’s very easy to use, just like an earbud,” Ko explains.

The company’s participation in the City I&T Grand Challenge has played an essential role in taking the design from a winning concept to reality. The support that Ko and his team have received from the competition includes a dedicated account manager, who helped keep their work on track from the prototyping phase through to product development and testing their device with users.

“The structure of the programme really helped to propel our development. We were able to focus our ideas and evolve our product to the next level,” Ko says.

The competition also provided opportunities for the Neuropix team to develop skills such as business pitching. And as one of the winners, the company received funding from the ITC, as well as access to R&D resources at HKSTP and mentorship from professionals to help scale production of the tVNS device for mass-market adoption.

“It has been a turning point for our company,” Ko says of the experience.

He sees the City I&T Grand Challenge as a prime example of Hong Kong’s thriving innovation and technology sector. “Hong Kong’s start-up ecosystem is very vibrant,” Ko says. “There are many high-level experts within reach, and also support for start-ups in developing ideas, innovating and achieving their goals.”