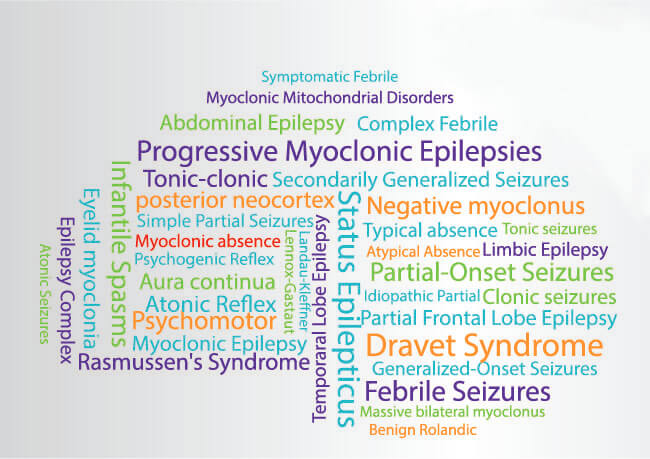 What to know about 4 types of epilepsy

Epilepsy is a common long-term brain condition. It causes seizures, which are bursts of electricity in the brain.

There are four main types of epilepsy: focal, generalized, combination focal and generalized, and unknown. A person’s seizure type determines what kind of epilepsy they have.

To be categorized as having epilepsy, a person must experience two or more unprovoked seizures. Some people can receive an epilepsy diagnosis if they have had one seizure and a doctor thinks they have a high likelihood of having another.

Read on to learn more about the different types of epilepsy and how to manage them.

Epilepsy is a neurological disorder. Its primary identifying factor is recurrent, unprovoked seizures.

Abnormal electrical activity in the brain causes seizures. This brain activity affects how a person feels, acts, and behaves. Depending on the seizure type and severity, a person may or may not lose consciousness.

Before doctors can diagnose a person with epilepsy, they need to decide if a seizureTrusted Source is provoked or unprovoked.

Many things cause seizures. These include head injuries, toxins, tumors, and infections. Doctors must rule out these potential causes before diagnosing someone with epilepsy.

According to the Centers for Disease Control and Prevention (CDC), there are 3.4 millionTrusted Source adults and children with epilepsy in the United States. Although it is common, doctors are still finding out more about this chronic disorder.

The three primary seizure types are:

The four different types of epilepsy are defined by the type of seizure a person experiences. They are:

Each type of epilepsy affects the brain differently. This means they have different identifying factors and treatments.

People with this type of epilepsy have generalized seizures. These affect both the left and right sides of the brain. Additionally, these seizures may be either motor, which involve physical movement, or non-motor, which do not.

If someone has a motor seizure, they may experience:

Non-motor seizures are also called absence seizures. Symptoms may include:

Generalized epilepsy usually starts during childhood. However, it can also affect adults.

People with focal epilepsy have focal seizures. Unlike generalized seizures, focal seizures only affect one part of the brain. They can start in one area and move to others.

These seizures can begin with an aura, which are minor symptoms signifying the seizure’s onset. This can feel like an uneasy feeling in the stomach, similar to the feeling of riding a rollercoaster.

As the seizure progresses, a person can experience motor and non-motor symptoms. Some motor symptoms of focal seizures include:

Someone with combination epilepsy has both generalized seizures and focal seizures. Therefore, they can experience a mixture of the symptoms discussed above.

Combined epilepsy is linked to Dravet syndrome, which is a rare, lifelong form of epilepsy. It is usually caused by a mutation in the SCN1A gene. Because it is often misdiagnosed, people who think they or a family member may have these seizures should contact a doctor.

If doctors do not know where seizures originate, they will diagnose a person with unknown epilepsy.

People with unknown epilepsy can have a combination of motor and non-motor symptoms. Motor seizures often present as tonic-clonic (previously referred to as “grand-mal”). These seizures can have the following symptoms:

Unknown epilepsy also presents with non-motor symptoms. These can include:

Although epilepsy is a seizure disorder, this does not mean that every seizure is a sign of epilepsy.

A person can have provoked seizures, which are seizures due to a cause other than epilepsy. Some examples of things that could induce a seizure are:

If a seizure is solely due to one of these causes, the individual does not have epilepsy.

However, if none of these possibilities prompted the seizure, the person may have epilepsy. To make an epilepsy diagnosis, doctors must first find out if someone has had a seizure. Doctors then determine what type of seizure it was.

Doctors can determine whether a person meets the diagnostic criteria through medical history details, EEG tests, blood tests, and brain imaging tests such as a CT scan or MRI.

There are different types of treatments for epilepsy.

Doctors typically use medication to control and stop epileptic seizures. Some drugs work for only one type of seizure, while others can control various seizure types.

A doctor prescribes medications based on a person’s seizure type, medical history, and age. If the medication does not help someone’s epilepsy, doctors may prescribe a different drug in place of, or combined with, the first medication.

Most people who have epilepsy have a good response to this form of treatment.

Some people have drug-resistant epilepsy. This means they cannot control their epilepsy using the first two medications prescribed. Around 33% of adults and 20–25% of children with epilepsy do not respond to their first-line treatment and must consider other options.

A doctor will discuss various treatments a person can try. These may include:

Dietary changes: Some diets may help control seizures. Recommended diets include the modified Atkins diet, ketogenic diet, and low glycemic diet. These diets should be carried out with support from a registered dietitian.

Vagus nerve stimulation (VNS): This therapy treats people with focal seizures. It works by sending mild electrical pulses through the vagus nerve, which leads to the brain. Over time, it changes how brain cells work.

Other options, like behavioral therapy and CBD oil, may help with treating drug-resistant epilepsy.

People with epilepsy must be consistent with their medication and/or treatment regimen. They should also try to avoid seizure triggers. Because triggers vary from person to person, a person can keep a diary of seizures to record possible triggers.

Children with an epilepsy diagnosis often outgrow itTrusted Source with age. For those whose epilepsy continues into adulthood, or people diagnosed later in life, it is very possible to live a normal life with epilepsy. Two-thirds of adults with epilepsy no longer experience seizures as a result of an effective treatment plan.

Anyone who suspects they have had a seizure should seek medical attention. A doctor can determine what caused the seizure, the type of seizure it was, and discuss appropriate next steps.

In many cases, epilepsy can be effectively treated and managed with seizure medication. Receiving an accurate and timely diagnosis is essential.

Epilepsy is a common seizure disorder. There are four main types of epilepsy: focal, generalized, combination focal and generalized, and unknown.

A doctor generally diagnoses someone with epilepsy if they have had two or more unprovoked seizures.

Medication is the most common treatment, and two-thirds of adults with epilepsy live seizure-free because of it. If medication does not work, other treatments are available. These include surgery, brain stimulation, and a modified diet.

People with epilepsy must be consistent with their medication and visit a doctor if their seizures appear to worsen.

Although it is uncommon for epilepsy to go away on its own, proper treatment can control the seizures. It is very possible to live a normal, full life with epilepsy.