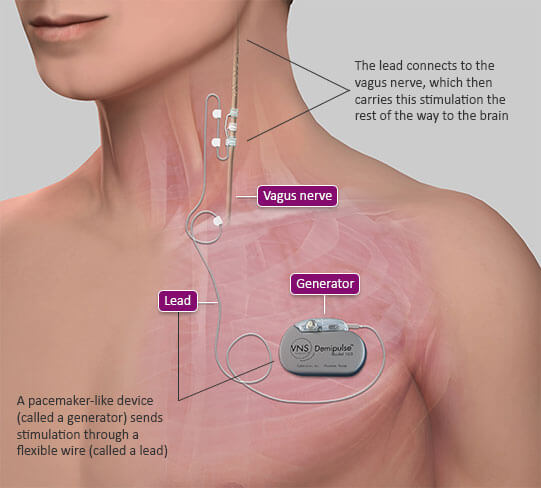 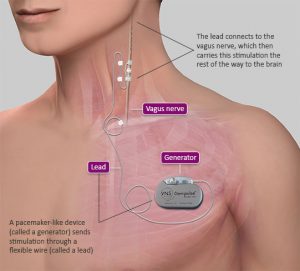 A new study involving UT Dallas researchers shows that vagus nerve stimulation (VNS) technology could help improve the lives of hundreds of thousands of people who suffer weakness and paralysis caused by strokes.

The study, published in the journal Stroke, marks the first time that VNS has been tested in individuals recovering from stroke.

VNS already has been approved by the U.S. Food and Drug Administration as a treatment for certain illnesses, such as depression and epilepsy. It involves sending a mild electric pulse through the vagus nerve, which is in the neck. Stimulating this nerve relays information about the state of the body to the brain and encourages it to reorganize in a process called neural plasticity.

The study demonstrated that the VNS experimental treatment is safe in patients recovering from stroke. According to study co-author Dr. Michael Kilgard, professor of neuroscience, it also showed significant potential for reducing impairments among stroke patients.

“This ‘first-in-humans’ study appears to demonstrate improvement in the recovery that stroke patients make,” Kilgard said. “This was a small study and there is more work to be done, but this is an exciting result.”

According to the American Stroke Association, nearly 800,000 people in the United States are stricken by strokes each year. Eighty percent of stroke survivors are impacted by hemiparesis, a weakness on one side of the body that could last a lifetime. Oral drug therapies have shown little success in reducing impairments and disabilities.

While specific results varied among the patients, several who received VNS reported greater motion and strength in their stroke-affected arms.

“This study demonstrates that vagus nerve stimulation appears to improve the recovery that stroke patients make,” said Kilgard, who is the Margaret Fonde Jonsson Professor. “VNS is triggered on successful movements to solidify gains that are made during physical therapy.”

“We are seeking several stroke patients in the Dallas area, each of whom will receive a VNS device as well as physical rehabilitation. We are looking forward to bringing this technology to U.S. patients for the very first time,” he said.

Dr. Robert Rennaker, Texas Instruments Distinguished Chair in Bioengineering, director of the Texas Biomedical Device Center and chairman of the Department of Bioengineering was a co-author of the study. He said a key factor in the new study is that it is double-blind, placebo-controlled, and at multiple sites, which is the highest standard for a clinical trial. He said that although it is placebo-controlled, all patients will receive the device and the full therapy.

“We already have seen a number of benefits from vagus nerve stimulation for other conditions,” Rennaker said. “We hope that we ultimately will see such success for stroke patients.”

University of Texas at Dallas