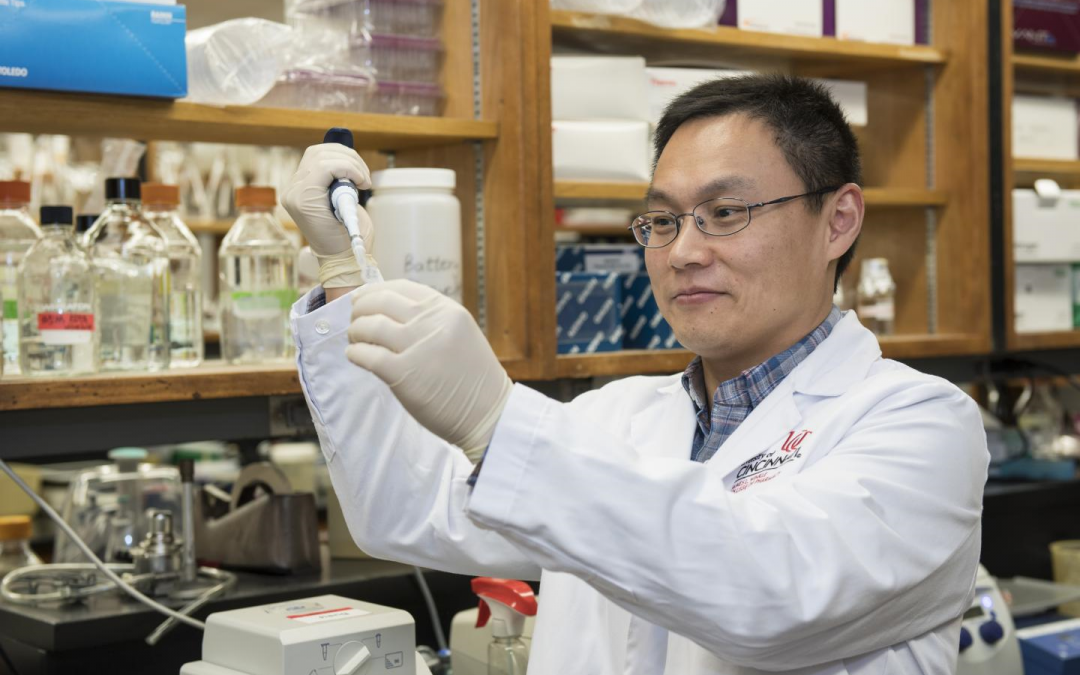 Research scientist Jianxiong Jiang, PhD, doesn’t just want to treat acquired epilepsy…he hopes to prevent it.
“Epilepsy is a common neurological condition that afflicts nearly three million Americans and 50 to 60 million people globally. The disease is featured by epileptic seizures due to unusual hypersynchronization and hyperexcitability of a group of brain neurons,” says Jiang, an assistant professor at the University of Cincinnati (UC) James L. Winkle College of Pharmacy.
Jiang is the principal investigator on a $1.75 million grant from the National Institute of Neurological Disorders and Stroke (#R01NS100947) for a five-year preclinical study on the signaling pathways underlying the development of acquired epilepsy. Unlike the genetic forms of epilepsy, acquired epilepsy often directly results from neurological insults such as strokes, traumatic brain injuries, brain infections and brain tumors.
“Despite remarkable advances in epilepsy treatment over the past decades, all current antiepileptic medications act merely to suppress seizures in patients who have already been diagnosed with epilepsy. Notwithstanding numerous clinical trials for epilepsy prevention, currently there is no therapeutic strategy that prevents the development of epilepsy in people at risk or provides modification of the disease in those diagnosed with epilepsy,” says Jiang, also noting another very unfortunate fact that more than 30 percent of epilepsy patients show insufficient response to any antiepileptic drug.
While Jiang says currently there are more than 30 drugs approved by the Food and Drug Administration to treat epileptic seizures, these medications come with a broad spectrum of side effects such as dizziness, drowsiness, fatigue, vomiting, blurred vision, headache, incoordination, behavior change and sleep disturbance.
“Sometimes the patients have to switch or even stop medications because the side effects are unacceptable. Developing novel therapeutic strategies for this debilitating brain condition is an urgent unmet need.”
Previous studies, he says, have shown that brain inflammation is an intrinsic feature of the pathophysiology in epilepsy of various causes. His lab, he says, is looking to identify the molecular mechanisms whereby inflammatory processes within the brain contribute to the development of acquired epilepsy and the associated behavioral comorbidities following status epilepticus.
Jiang will track the alterations of some key inflammatory mediators within the brain in animal models and study their potential roles in the development of acquired epilepsy. Jiang says he feels confident that the goal of “no seizures, no side effects, no comorbidities” in the management of epilepsy will be ultimately achieved one day through the collaborative efforts among the epilepsy research community: “Successful completion of this study might lead to the identification of novel molecular targets for the prevention strategies of acquired epilepsy.”
Collaborating with Jiang is Professor Gary Gudelsky, PhD, co-investigator and chair of the Division of Pharmaceutical Sciences at Winkle College. Other collaborators and consultants for this grant include Steve Danzer, PhD, Cincinnati Children’s and James Herman, PhD, a professor in the UC College of Medicine’s Department of Psychiatry and Behavioral Neuroscience.

Photo: Dr. Jiang in his lab at the UC James L. Winkle College of Pharmacy.  Credit University of Cincinnati