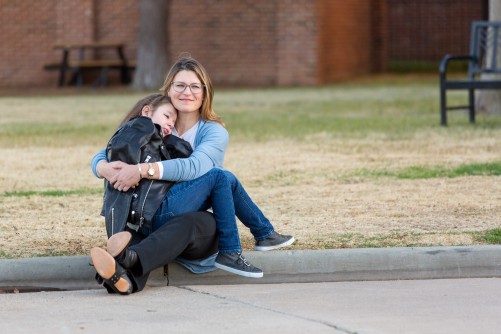 A few weeks after her youngest daughter Marie was born, Yssa DeWoody knew that something wasn’t right. She couldn’t put her finger on it, but when Marie began having seizures a couple of months later, Yssa and her family got an answer. Marie has Ring Chromosome 14 Syndrome, a rare condition characterized by seizures and intellectual disability.

The diagnosis didn’t relieve much stress. “When you get a rare syndrome diagnosis, it’s a mixed bag,” she said. “It’s good to know what’s causing the seizures, but it opens up a whole world of mostly bad news.”

Marie’s seizures never have been controlled; in 13 years, her longest seizure-free period has been 3 months. She can have one seizure a week, or as many as a dozen tonic-clonic seizures in a day, requiring multiple rescue medications.

When Marie was born, her older sisters Taylor and Audrey were about 7 and 5 years old. Caring for three young children is exhausting for any parents; when one child has uncontrolled seizures, it can become unbearable. Both Yssa and her husband, Andrew, had to acknowledge the stress of caregiving, including their fears about what was to come as Marie grew older.

Yssa talks about caregiving, and the stress that comes with it, as a balancing act. She remembers a time when Marie was about 18 months old and having a cluster of seizures. Yssa was crying, as she always did when her daughter had seizures.

“I said to my husband, ‘I look forward to when I’m not crying anymore during these,’” remembered Yssa. “And he said, ‘I hope you never stop crying during them.’

“We were both right,” she said. “You can’t live in a constant state of trauma, but you still need to stay tender. The goal is to live your life with the tension, where you hold both of these truths in your hand.”

One sign of traumatic stress — which many caregivers and siblings experience — is a gradual lessening of compassion over time, called compassion fatigue. It can come with emotional depletion, exhaustion and depression, as well as hypervigilance, intrusive thoughts, avoidance and fear. The person becomes hardened and cynical and their view of the world darkens.

Many parents can worry that the anxiety and stress can lead to them losing love for their child. Admitting those feelings is key, said Yssa. “You know you’ll always love your child, but to acknowledge that that’s a fear of yours, to get that cat out of the bag, is ultimately healthy.” Read more about caregiver stress among the parents and siblings of people with epilepsy.

Each person’s way of relieving stress is different. “My husband’s an introvert; he goes to the ranch and gets away,” said Yssa. “He comes back and his mind is clear. I need to get away, but I need other people and laughter. I need that like some people need water.”

Yssa also found solace in advocacy. When Marie was born, she was a math professor at Purdue University. Now she is president of both Ring14 USA, a nonprofit that she helped to found, and Ring14 International . She’s also part of a group of advocates (many of whom are also parents) who informally call themselves the Really Crappy Seizure Club. More formally called Rare and Catastrophic Seizures in Childhood, the group serves non-profit organizations focused on providing day to day support to families living with intractable seizures, such as Ring14 Syndrome and Dup15q Syndrome.

“My role in advocacy has been critical for helping with my stress,” Yssa said. “I travel and interact with other people who are like me – who have stressful backgrounds but it’s a positive support group.  I also gain a little distance from my child and it opens my eyes to other children. There’s this sense that I’m not in this just for me.”

That doesn’t mean that advocacy is for everyone, she noted. “I’m a very active person; I like to be involved. So for me, this is helpful. For someone else, it may be awful. You have to recognize when you’re stressed and then figure out what to do about it, for you.”

For many siblings, “There is no life before epilepsy”

Taylor and Audrey, now college students, both were intimately involved in caring for their sister and continue to participate in her care whenever possible.

“I think the most difficult part about a sibling experience is that there is no ‘life before epilepsy,’” said Taylor DeWoody, 21. “Parents have a life before their children, but we don’t remember what it’s like to not have our sister. It’s very formative to grow up and have your main feeling be helplessness.”

“Siblings are profoundly impacted,” said Yssa. “When we talk about anxiety and stress, it’s easy to focus on the parents and forget the siblings. We need to make sure we’re caring for their emotional well-being too.”

Taylor, the oldest, has accepted that one day she may be Marie’s primary caregiver; this shapes every decision she makes about her future.

“I have to think about it when I’m dating — would this person be willing to have my sister move in with them one day?” she said. “It shapes my career decisions; I’m going to need enough income to be able to pay for a longtime nurse. Marie is the number-one priority in everything I do.”

Currently a senior at Rice University — which she chose because it’s close to the family’s Texas home — Taylor plans to become a lawyer who specializes in child advocacy law.

“When I was little, I took on the role of being my sister’s interpreter,” she said. “I would tell my parents ‘Marie wouldn’t like that’ or ‘Marie doesn’t want that.’ I don’t know why I thought I knew better than my parents, but I did! And now I want to magnify the voices of people who can’t really speak for themselves.”

Audrey DeWoody, 19, was recently diagnosed with post-traumatic stress disorder (PTSD), rooted in her experiences with her sister’s health issues.

She remembers watching her parents do CPR on Marie after a seizure. “Our parents would tell us that they weren’t sure how much time we had with Marie,” Audrey said. “It’s hard thinking that your sister could die at any time.”

Even now when she takes care of Marie, Audrey worries. “I get so scared that she’ll have a seizure and go to the hospital and pass away … and it won’t be my fault, I know, but maybe it could have been my fault. Maybe there was something I could have done. I’m the big sister and I’m supposed to take care of her and protect her, but there are so many things that are out of my control.”

While most research on caregiver stress has focused on parents, studies have delved into the experiences of people who have a sibling with a chronic condition or with cancer. While results vary, many siblings report symptoms of anxiety, as well as guilt and embarrassment. Some may feel neglected by their parents, and jealous or angry that they don’t receive more attention.

Very few studies have examined sibling experiences in epilepsy. A 2009 study, which included interviews with 25 families, found that while siblings had negative experiences, they made clear, positive statements about their sibling with epilepsy and stated that they would not want to change them in any way.

One young woman in the study said that although life with her brother had been disruptive when he was younger, “What matters is that you love this person and you do everything you can to help them. It is hard and it may never become easy, but we cope. I would never change my brother, and I don’t resent him.”

As a young child, Audrey realized that some people need attention and help more than others do. “But I might have skewed it to the point that I thought I didn’t need attention and help at all, or didn’t deserve it, or something,” she said. “I guess I thought since some people can get through life with all of these disabilities, I should be able to get through life without a lot of help.”

In middle school, Audrey began using art as an outlet for her anxiety and stress. “I’ve made a lot of pieces about Marie and for Marie,” she said. “It’s helped me to put a visual on all the negative emotions that I feel — not toward her, but toward the circumstances. I find it very calming.” Audrey has submitted work to Rare Artist, a foundation created to spotlight the work of people affected by rare diseases.

Both Audrey and Taylor acknowledge that Marie’s epilepsy imposed limits on them as children. They both played soccer but weren’t able to join a travel team because their parents couldn’t commit to hours of driving to games and tournaments on the weekends. Family vacations were restricted sometimes, when Audrey or Taylor wanted to do something that Marie wasn’t able to do.

Notes from the 1940s: A sister speaks out

People can be affected by a sibling’s epilepsy even if they never lived with the sibling growing up. By the time Susan Jenks Breen was born in Washington, DC, in the mid-1940s, her older brother Tommy was living in a special home for children with epilepsy. Tommy had been born with other issues, including an intellectual disability; Susan believes they may have been caused by perinatal trauma.

Tommy lived at home for the first few years of his life. But when Susan’s older sister was born, “My parents decided to institutionalize him,” Susan said. “They felt it would harm our development to have him at home. This is an antiquated attitude, but back then they didn’t have a lot of options, and they had the financial means to provide this care.”

“He was the sweetest kid”

Susan remembers visiting Tommy every weekend, for years, with her parents and sister. “He was the sweetest kid; he was much nicer than I was,” she said. “He used to let all the other kids play with his toys, and he wouldn’t care if they broke them.” She remembers him also as a skilled artist who made beautiful pottery.

Susan’s father, Thomas Jenks, was heavily involved in epilepsy advocacy in the 1950s and ‘60s as an early president of The Epilepsy Foundation, and was one of the first board members of the NCRC.

As the years passed, family visits to Tommy became less frequent. Susan remembers that he had become more difficult to manage, given that he had the hormones of a teenager but the mind of a young child.

When Susan was 14, she began attending a boarding school in Massachusetts. She rarely saw her brother after that. Several years later Tommy died, still living at the home outside Baltimore.

“I’m sorry my parents didn’t keep him at home with us,” she said. “I look back, and it makes me sad.”