Traditional Chinese Herb, Huperzine A, May Protect Against Epileptic Seizures 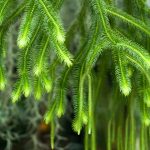 A naturally occurring compound often used in traditional Chinese medicine offered “robust” protection against induced seizures in mouse models of epilepsy and may prove of benefit to people — especially children — with treatment-resistant forms of the disease, according to a study published in the journal Frontiers in Pharmacology.

Huperzine A, found in the club moss Huperzia serrata, is particularly helpful against febrile seizures that often occur in those with Dravet syndrome, a severe form of childhood epilepsy, and in genetic epilepsy with febrile seizures plus (GEFS+).

For the study, titled “Huperzine A Provides Robust and Sustained Protection against Induced Seizures in Scn1a Mutant Mice,” a team of researchers led by Dr. Andrew Escayg at Emory University School of Medicine in Atlanta, developed a mouse model of genetic epilepsy by modifying one copy of the animals’ SCN1A gene. This is the gene that is mutated in children with Dravet syndrome and GEFS+.

The researchers found that when they raised the core body temperature of the mice to 40°C (about 104°F), the mice all experienced epileptic seizures. However, when they treated the animals with huperzine A, their core temperature had to be significantly higher for a seizure to occur.

Treatment with huperzine A also reduced the frequency and severity of seizures induced electrically and chemically in both normal and mutant mice.

“The protection observed in normal mice suggest huperzine A might also increase seizure resistance in other forms of treatment-resistant epilepsy. While these results are encouraging, further research will be required to determine suitability of using huperzine A as a clinical treatment for epilepsy,” Escayg, an associate professor of human genetics, said in a press release.

Experts believe huperzine A works by inhibiting the acetylcholinesterase enzyme, which breaks down the neurotransmitter acetylcholine. When this happens, the level of acetylcholine in the brain increases and can balance the communication between nerve cells.

“We think that huperzine A could normalize the balance between neuronal inhibition and excitation in patients with SCN1A mutations, thereby protecting against seizure generation,” Escayg said.

The team now is working to understand whether huperzine A can reduce the frequency of spontaneous seizures in the mouse model.

Biscayne Pharmaceuticals, a clinical stage biotechnology company based in Miami, is planning a Phase 1b clinical trial this year to test huperzine A in adults with drug resistant complex partial epilepsy. Clinical trials in children with Dravet syndrome are planned once more toxicology studies are completed.