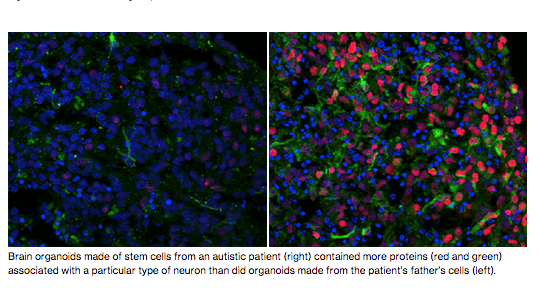 Tiny Brain Clumps Offer New Clues into the Cause of Autism

Brain “organoids” made from the stem cells of autism patients could help researchers determine the factors that lead to the disorder.

By turning stem cells taken from autistic patients into tiny “organoids” that closely resemble the brains of human embryos, researchers have gleaned potentially valuable insights into what may go wrong during brain development in people with autism.

The work, published today, illustrates the value of using three-dimensional brain structures, which re-create natural conditions more accurately than traditional two-dimensional cell cultures, to investigate the physical basis of poorly understood brain disorders. Though some 80 percent of autism cases have no clear genetic cause, it is generally accepted that the disorder can be traced back to things that go wrong during early brain development, and the ability to observe embryonic brain development could yield valuable insights that may reveal how to treat or even reverse it. Other researchers are now investigating the potential of using organoids to study other misunderstood diseases like schizophrenia and Alzheimer’s (see “10 Breakthrough Technologies 2015: Brain Organoids”).

Much of the investigation into the causes of autism has focused on searching through patients’ genomes for mutations and then using animal models to study the roles the affected genes play in brain development. This is the first published study using brain organoids to investigate the disorder. The researchers identified commonalities among organoids made from the cells of these patients and worked to determine their genetic basis.