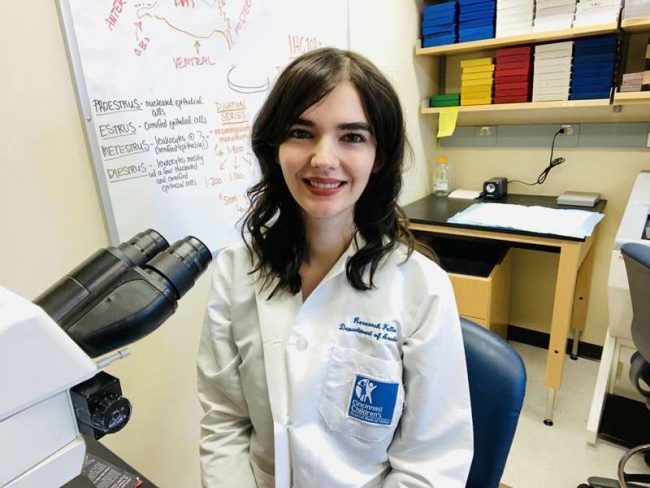 Christin Godale’s life didn’t go exactly how she planned. Her days as a New York fashion model were cut short after her epilepsy went into overdrive and hospitalized her for months.

“I kind of wanted to understand what was happening in my brain. And I had very supportive neurologists and epileptologists at the time, and while I was sitting in my hospital bed they were giving me these medical school books on the brain,” she says.

On that hospital bed that sidelined her modeling career, Godale was determined to become a neurological researcher and cure epilepsy. She received her Ph.d. in neuroscience from the University of Cincinnati.

There is no medicine that cures the disease. Fifty-million people suffer from it worldwide, making it the fourth most common neurological disease.

Godale has been dealing with epilepsy all her life. She’s had to change anti-seizure medication as it becomes ineffective, explaining the drugs cause anxiety, depression and brain fog.

“It really impedes on your life,” she says. “A lot of us would rather experience that than having seizures constantly, because the more you have seizures, the more things change in your brain. The circuitry becomes more hyper-excitable and these abnormal connections form and that causes you to have more seizures.”

In her UC lab, Godale studied how epilepsy develops in the brain and ways to stop it. She recently went to work for CincyTech as its director of life sciences. CincyTech is a public-private seed stage investor. This may have put her in an even better position to find start-ups who can pick up where her research left off.

“I’m very excited about one of our potential investments that focuses on an epilepsy disorder and is also multi-prong, which focuses on Alzheimer’s disease and a couple of diseases in the basal ganglia of the brain.”

CincyTech’s Byron McCauley is excited to have Godale and encourages other young scientists to consider going the investment route.

“We win with great people here. And we have to always have a strong bench because you have to have a pipeline of talent. And that’s what we try to do. We have relationships with the University of Cincinnati and others like Miami (University).”

For Godale, her mission is clear: finding a cure for epilepsy and other diseases, even if some days she doesn’t feel the best.

“I want every person with a disability to know that you can achieve what you want to achieve, and persistence is key,” she concludes. “But you just have to continue moving forward even when you feel like you can’t because you’re going to get there eventually.”