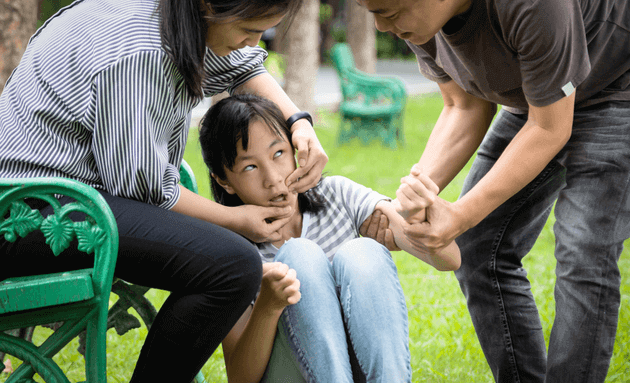 Seizures don’t just happen with epilepsy. Here’s what can trigger a seizure —from stress to lack of sleep and more.

Having a seizure doesn’t necessarily mean you have epilepsy. A seizure is a sudden attack of brain activity that typically lasts a few seconds or minutes. It can cause muscle spasms (convulsions), as well as confusion, loss of consciousness, and other symptoms.

Epilepsy is a group of brain disorders that cause seizures. You can be diagnosed with epilepsy after having two or more unprovoked seizures within 24 hours of each other. This means the seizures weren’t triggered by anything.

But it’s also possible for someone to have seizures yet not have epilepsy. The seizures may be less frequent. For example, some people may only have one seizure in their lifetime. In other cases, there may be a known factor that provoked the seizure. In general, certain health factors can trigger a seizure. These include excess stress, low blood sugar, lack of sleep, and medication side effects, among others.

About 1 in 10 people will experience a seizure in their lifetime. Seizures and epilepsy can often arise after a brain injury, brain tumor, or stroke (blockage, bursting, or leaking of brain blood vessels). Here are other health factors that can provoke seizures.

Getting enough sleep is essential for your health. It helps your brain process memories and things you’ve learned. But some people can have seizures that disrupt their sleep. Having a nighttime seizure may be a sign of a sleep disorder or epilepsy. If you have epilepsy, it may be likely that you have a sleep disorder too.

But can lack of sleep cause a seizure? While sleep deprivation isn’t the sole cause of a seizure, experts know that sleep and seizures have a two-way relationship: Just as seizures can interrupt sleep, a frequent lack of sleep can trigger a seizure or lead to worse seizures.

Stress can trigger seizures, though the reason isn’t entirely clear. But experts know that the hippocampus—a part of the brain involved in learning and memory—is sensitive to stress and helps manage it. Stress is linked to increased brain activity in this region, which could set off a seizure. For people with epilepsy, stress is one of the most common seizure triggers.

Also, stress can lead to non-epileptic seizures (NES). These seizures might happen from psychological distress, mental trauma, or certain brain conditions, such as narcolepsy (a sleep disorder) or Tourette syndrome (a disorder of sudden repeated movements and sounds).

About 5% to 20% of people with epilepsy may actually have NES. Unlike epileptic seizures, an NES affects the brain differently and can’t be treated with anti-seizure medications. Instead, they can be managed through therapy and reducing stress.

Hypoglycemia, or having too low sugar levels in your blood, can provoke changes in your brain activity, leading to seizures. It can also cause strokes, which are linked to seizures.

Too much sun exposure and extreme heat can cause heatstroke. Your usual body temperature of about 98 degrees Fahrenheit climbs to over 106 degrees F within 15 minutes. This overheating might also affect your brain. For example, symptoms of heatstroke include seizures, along with slurred speech, confusion, and loss of consciousness. Heatstroke is a potentially fatal condition and requires immediate medical attention.

Severe cases of alcohol withdrawal can develop into a state of delirium tremens, which can result in seizures, agitation, hallucinations, and severe confusion. This may require treatment at a hospital or specialized care facility.

A febrile seizure is a seizure that happens with a high fever during an illness or infection. It typically affects children, toddlers, or infants. Though the exact cause of febrile seizures is unknown, some people may have a genetic predisposition for developing them.

Seizures can be a serious side effect of certain medications and drug intoxication. Researchers have found that 9% of status epilepticus—life-threatening seizures that last longer than five minutes—can be linked to drugs or poisoning.

Several legal and illegal substances can cause seizures. The most commonly reported are:

Prior to taking any medication, be sure you understand the potential risks and be mindful of symptoms. Seek medical attention if you are experiencing any severe side effects.

Traumatic brain injury (TBI) can happen when a physical injury damages the tissues of the brain. This could be a head injury from a fall, sports activity, or a car accident. A concussion can be a mild type of TBI.

TBIs can lead to seizures, as well as headache, loss of consciousness, confusion, speech and memory difficulties, mood changes, and other symptoms. TBIs usually require immediate medical attention, especially within 24 hours of the injury. Severe cases can cause permanent disability or be potentially fatal.

Seizures might occur within the first week of a TBI. This can lead to developing a type of epilepsy later on known as post-traumatic epilepsy. But some people could also develop more isolated, post-traumatic seizures after a TBI.

When to See a Healthcare Provider

While seizure symptoms like convulsions and loss of consciousness can be very alarming, not every seizure may be a medical emergency. However, it’s essential to get emergency help if you or someone you see experiences:

If you’re concerned about these symptoms and are experiencing them, talk to your healthcare provider. If you know someone who experiences seizures, learn about emergency steps to take if they have a seizure.

Seizures are surges of brain activity that cause convulsions and other involuntary symptoms. They are a sign of epilepsy and can often happen after a stroke. However, seizures can also occur for people who don’t have epilepsy. Other factors that can trigger a seizure include a lack of sleep, stress, medications, and alcohol withdrawal.

If you suspect you have epilepsy or are experiencing seizures, consult a medical professional for diagnosis, treatment, and prevention methods. The sooner you act, the better off you’ll be.