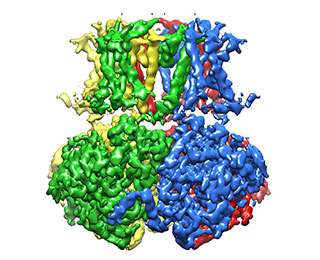 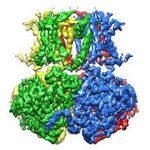 Within the brain, some neurons fire off hundreds of signals per second, and after ramping up for such a barrage, they need to relax and reset. A particular type of ion channel helps bring them down, ensuring these cells don’t get overstimulated—a state that potentially can lead to severe epileptic seizures, among other problems.

New research by Rockefeller University scientists and their collaborators has detailed the structure of this channel, called Slo2.2, and so offers insights about how it works.

“Slo2.2 helps certain neurons return to their resting state by releasing positively charged potassium ions, which flow out at an unusually rapid rate,” says study author Roderick MacKinnon, John D. Rockefeller Professor, head of the Laboratory of Molecular Neurobiology and Biophysics, and a Howard Hughes Medical Institute Investigator. “However, little was known about how this particular type of channel opens and closes, let alone how it conducts potassium at such an unusually high rate.”

“We have determined the structure of the channel in its inactive, closed state—an important step toward understanding the mechanism by which Slo2.2 contributes to the normal function of neurons in the brain and elsewhere,” MacKinnon adds. The research was published October 5 in Nature.

The signals that transmit information in the nervous system are generated by electrically charged atoms moving into and out of neurons. Typically, when a neuron fires, positively charged sodium rushes into the cell, generating a pulse of electrical activity that subsides as positively charged potassium floods out.

In certain circumstances electrical impulses in the nervous system must be transmitted at a high frequency. But too high a frequency for too long can give rise to uncontrolled electrical activity, as seen in epilepsy, and can damage cells. For this reason mechanisms have evolved to put a protective break on the process. Slo2.2 underlies one such protective mechanism.

The Slo2.2 ion channel does this by opening in response to the very sodium that enters the cell during an electrical impulse. When it opens, Slo2.2 allows potassium to flow out of the cell, thus restoring the cell’s internal electrical state. It is not the only channel through which potassium travels; however, ions flow through Slo2.2 at ten times the rate of most other potassium channels.

Mutations in the gene that encodes Slo2.2 have been linked with intellectual disabilities and epilepsy. For about a decade, researchers in the MacKinnon lab have been working to decipher the ion channel’s structure to better understand how it functions under normal circumstances and in disease.

First author Richard Hite, a postdoc in the lab, took on the task of crystallizing the protein with the intent of mapping all of its atoms. The structure of some proteins can be determined using a method known as X-ray crystallography, which involves shooting high-energy x-rays at a crystallized protein and detecting the pattern produced when the rays bounce off the molecules within the crystal.

But the Slo2.2 protein resisted crystallization, perhaps because of its large size, so Hite decided to try a new structural biology approach, called cryo-electron microscopy (EM).

Cryo-EM relies on rapidly freezing a molecule in many random orientations, rather than coaxing it into a crystal. Hite carried out computations using about 25,000 independent images of the Slo2.2 channel, each providing a different perspective, and used these to build a three-dimensional model of the molecule’s shape.

Within a year, the researchers had obtained a full structure for Slo2.2 in its closed state. They uncovered a channel with four-fold symmetry. Inside the cell, where a potassium ion’s path begins, two regulator domains (from each of four subunits) form a gating ring, which must open in order for potassium to pass. This ring, in turn, creates a massive funnel; when the channel is closed, the tip of this funnel is blocked.

With this discovery, the researchers were able to better understand how Slo2.2 conducts ions so rapidly. When they mapped out the electrical charges across the channel’s surface, they found the funnel has a strongly negative charge. It attracts positively charged potassium, creating a pool of ions waiting to exit once the gating ring opens.

Once past the ring, an ion would traverse the cell membrane through a part of the protein called a selectivity filter that allows only potassium to pass.

“Beyond giving us new insight on the basic configuration of this channel, this new structure also explains how Slo2.2 helps to quickly reduce the internal charge of a neuron and so rapidly return it to its resting state,” Hite says. “Our next step is to determine Slo2.2’s structure when it’s open, which would help to explain how the arrival of sodium prompts the channel to open and allow potassium out.”

PICTURE: The single large protein constituting the Slo2.2 channel has four-fold symmetry, shown above from the side. To leave the cell, a potassium ion must first pass through the gating ring (lower half) of the channel, then through the membrane-spanning domain (top half). Credit: Laboratory of Molecular Neurobiology and Biophysics/NatureSource: Rockefeller University