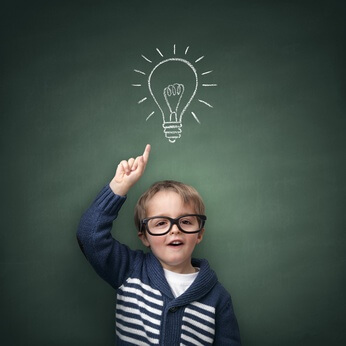 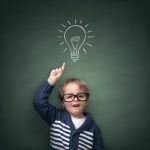 Schoolboy standing in front of a blackboard with a bright idea light bulb above his head concept for innovation, imagination and inspirational ideas

Two epilepsy drugs, levetiracetam and topiramate, may not harm the thinking skills and IQs of school-age children born to women who took them while pregnant, according to a recent study. The research is published in the August 31, 2016, online issue of Neurology®, the medical journal of the American Academy of Neurology. However, the drug valproate is associated with lower IQs in children, especially at higher dosages.

“As doctors move away from prescribing valproate, we need to know about the alternatives for pregnant women with epilepsy,” said study author Rebecca Bromley, PhD, of The University of Manchester in the United Kingdom. “Lower IQs early on can harm a child’s educational success for years to come and so it is important that we gain a full understanding about any impact on development these medications may have.”

Using data from the UK Epilepsy and Pregnancy Register, the researchers identified 171 women with epilepsy who had a child between the ages of five and nine years old. While pregnant, 42 of the women had taken levetiracetam, 27 had taken topiramate and 47 had taken valproate. A control group of 55 women did not take epilepsy drugs during pregnancy. The researchers performed tests on their children to measure IQ, verbal and non-verbal comprehension and the speed at which they could process visual information.

Children of women who took levetiracetam or topiramate did not have reduced IQs or other thinking skills compared to the control group, no matter what dosage of medication their mother took. Children whose mothers took valproate had the lowest IQs of the study. They scored an average of 11 points lower on the IQ test, which has a mean of 100 points. Nine of the 47 children whose mothers took valproate, or 19 percent, fell below the average range on the IQ score, compared to three of the 55 children whose mothers did not take any epilepsy drugs during pregnancy, or 6 percent.

“While our findings represent a promising start, larger studies need to be done to ensure that these drugs will not change the thinking abilities of children,” Bromley said.

She noted that one limitation of the study is that the pregnancy registry represents only a small proportion of women with epilepsy and the results may not be representative of all women with epilepsy. Bromley also noted that topiramate has been associated with an increased risk of birth defects such as cleft lip and palate. Because few children for each drug were included in the study, the results should be interpreted with caution.