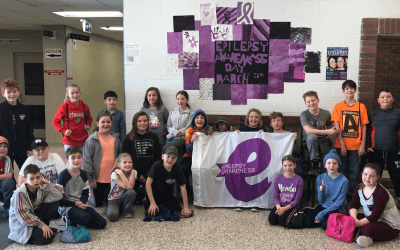 (Special Note: Great job Taylor and we love you using our exclusive EpilepsyStore.com Epilepsy Awareness Purple Ribbon Flag.  Keep up the wonderful work you are doing up there in Canada Taylor!  Love it!  EpilepsyU.com)

A 10-year-old girl is leading her peers in becoming more aware about epilepsy.

Taylor Burk, a Grade 5 student at Indian Creek Road Public School, has been doing announcements at school every day for the past week or so regarding facts on epilepsy. Students who paid attention during the announcements were then given a little “quiz” on Monday — which was also Epilepsy Awareness Day.

Taylor’s mother, Heather Burk says in addition to educating her classmates and running the quiz, Taylor has been running colouring contests and leading “purple day enthusiasm” at school.

The topic of epilepsy awareness is one that hits close to home for Taylor.

“Taylor started to have seizures when she was just about three years old,” says Burk. “So it’s important for us of course to have other people aware of epilepsy.”

Burk says she’s proud of how her daughter has stepped up.

“It makes me feel really good. It’s nice for her to take on this leadership role,” says Burk.

“Her teacher actually had someone from the Epilepsy Southwestern Ontario chapter come in and give a presentation,” she says. “From there, it was decided that [Taylor] would take on this initiative and inform the whole school about epilepsy.”

Taylor says most of the students in Grades 3 to 8 took part in the quiz on Monday.

“A lot of students got it right. That made me pretty happy because I know they were actually listening [to] what I had to say about epilepsy,” she says.

The Grade 5 student says she intends to continue educating her fellow classmates every year until high school.