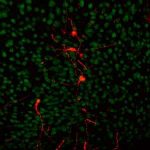 Neurological disorders are especially challenging to study in the laboratory, in part because of limited access to fully functional human neurons. Now, a powerful technique for reliably producing a subset of neurons involved with common neurological disorders has been developed by a team of Singaporean researchers led by Hyunsoo Je of the DUKE-NUS Medical School.

Neurons can be classified based on the neurotransmitters that they release—for example, those that secrete glutamate are considered ‘excitatory’, while those releasing gamma-aminobutyric acid (GABA) are ‘inhibitory’.

The latter group of neurons plays a prominent role in conditions such as epilepsy, but these cells are generally poorly understood, says team member Alfred Sun, a postdoctoral fellow working with Bing Lim and Huck Hui Ng at the A*STAR Genome Institute of Singapore. “This is mainly because there is currently no efficient and fast protocol to make them in culture,” he says. Indeed, existing methods for converting stem cells into GABA-releasing neurons can take more than six months to complete.

The process by which stem cells naturally develop into mature, specialized cells is largely driven by proteins known as transcription factors, which directly control gene activity. So the research team systematically treated cultured stem cells with different combinations of transcription factors that are known to participate in the formation of GABAergic neurons.

This allowed them to home in on three critical transcription factors, which formed the foundation for a potent neuron-generating cocktail. With their final recipe, the researchers were able to transform more than 90 per cent of treated stem cells into GABAergic neurons in just 35 days.

Sun was taken aback by the success of their protocol. “The resultant cells seem to be really functionally mature,” he says. He and his colleagues were able to discern a diverse array of subtypes of GABAergic neurons in their stem cell-derived cultures, which exhibited molecular characteristics and electrophysiological behavior that were essentially identical to that of their naturally occurring counterparts. Indeed, these neurons were even able to form functional inhibitory synaptic connections with other neurons both in culture and after transplantation into mice (see image).

This method can’t yet generate the full spectrum of GABAergic neurons, and Sun says his team is still learning how to produce one major subclass known as parvalbumin neurons. Nevertheless, the researchers have already begun to explore the clear clinical potential of their neuron-producing protocol. “We are interested in understanding epilepsy, autism and schizophrenia,” says Sun, “and we are already applying this method to model epilepsy.”