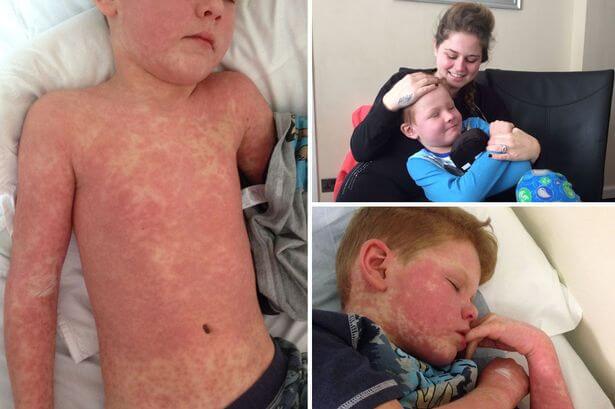 If you take medication and start feeling flu symptoms and getting a strange rash, it is something to be monitored closely, seek medical attention immediately if the rash persists or grows.

Stevens-Johnson syndrome is a rare, serious disorder of your skin and mucous membranes. It’s usually a reaction to a medication or an infection. Often, Stevens-Johnson syndrome begins with flu-like symptoms, followed by a painful red or purplish rash that spreads and blisters. Then the top layer of the affected skin dies and sheds.

Stevens-Johnson syndrome is a medical emergency that usually requires hospitalization. Treatment focuses on eliminating the underlying cause, controlling symptoms and minimizing complications.

Recovery after Stevens-Johnson syndrome can take weeks to months, depending on the severity of your condition. If it was caused by a medication, you’ll need to permanently avoid that drug and others closely related to it. – MAYO Clinic 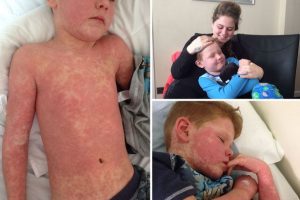 Boy, 8, covered in blisters in mouth and eyes from allergic reaction to epilepsy medicine – Source: http://www.mirror.co.uk/news/real-life-stories/boy-8-covered-blisters-mouth-5278825

Recently, we have seen more reports than in the past, it could be do to better reporting. Although it is still incredibly rare, it is something to watch out for.

Often, signs of Stevens-Johnson Syndrome begin with flu-like symptoms, followed by a painful red or purplish rash that spreads or blisters, eventually causing the top layer of your skin to die and shed.

And SJS has also been consistently reported as an uncommon side effect of herbal supplements containing Ginseng!

In short, just about any drug is a potential cause.

If you have any of the symptoms listed above or any history of Steven’s-Johnson Syndrome, get a full list of meds to be avoided from your doctor, dermatologist, neurologist or pharmacist.