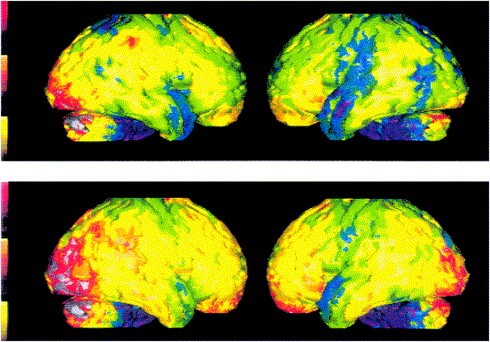 The scan is called single photon emission computed tomography (SPECT). It highlights the hotspot in the brain where seizures originate. It’s used in patients who are potential candidates for surgery to remove the portion of the brain responsible for seizures, known as the epileptogenic zone.

Surgery is an option for patients who do not respond to medications, or cannot tolerate the side effects. Surgery is considered only when the area to be removed is not responsible for critical functions.

A SPECT scan measures blood flow, which increases in the area of the epileptogenic zone during seizures. Prior to undergoing the scan, the patient is admitted to the Epilepsy Monitoring Unit, hooked up to a continuous EEG and carefully monitored for seizures. Within seconds of a seizure being detected, a nuclear medicine technician infuses a radiopharmaceutical into the patient.

A radiopharmaceutical is a tracer that emits small amounts of radioactivity. The tracer travels to the brain and marks the area where blood flow was increased during the seizure. The area lights up like a hotspot when the patient subsequently undergoes the SPECT scan.

A scan obtained while a patient is having a seizure is called an ictal SPECT. (Ictal means seizure.) It is compared with an interictal SPECT, which is done between seizures.

“This is a very useful technique in cases in which seizures are difficult to localize with an electroencephalogram or in which a patient’s MRI is normal,” said Jorge Asconape, MD, a professor in the Department of Neurology who specializes in epilepsy.

SPECT scans require close collaboration between the departments of Radiology and Neurology, said Bruno Maton, MD, an associate professor in the Department of Neurology who specializes in epilepsy.

New software allows for 3-D modeling of the area of the brain responsible for seizures, said Robert Wagner, MD, medical director of Nuclear Medicine and a professor in the Department of Radiology.

Loyola’s Epilepsy Center and Monitoring Services offers a comprehensive multidisciplinary approach to epilepsy and seizure disorders for adults and children as young as two years old. Pediatric and adult epileptologist consultation and state-of-the-art neuroimaging and electrodiagnostic technology are used to identify and assess complex seizure disorders with short- and long-term monitoring.

Diagnostic technologies – such as MRI, PET, SPECT and neuropsychological testing – are available to identify and assess complex seizure disorders. Loyola’s neurosciences Intensive Care Unit is equipped with continuous EEG and video monitoring for adults and children and is staffed by trained neurology nurses and certified technologists. Ambulatory EEG can be performed if inpatient monitoring is not required. Inpatient intra-operative epilepsy monitoring is offered in collaboration with neurosurgery.