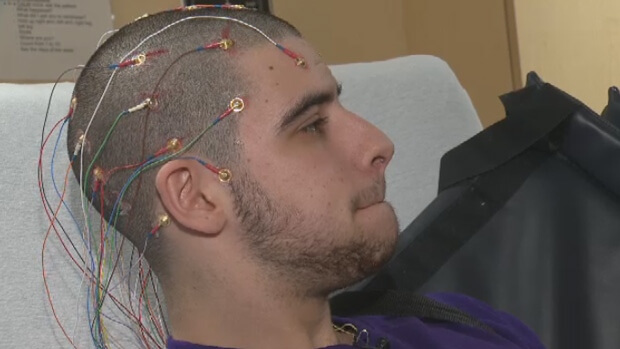 A specialized test for epilepsy patients is allowing doctors to better plan for epilepsy surgery, while avoiding catastrophic effects on speech and memory.

“It involves using an anesthetic called etomidate to put one half of the brain to sleep at a time while testing the language and memory abilities in the opposite hemisphere,” explains neuropsychologist Antonina Omisade.

Omisade says there are two main goals to the etomidate speech and memory test – or ESAM for short.

“Number one – which side of the brain is predominantly responsible for language, to ensure that language doesn’t suffer as a result of epilepsy surgery,” says Omisade.

“And the second piece of information is to help us determine whether one side of the brain would be capable of sustaining memory abilities independently.”

MacKenzie took his first seizure in 2016, while he was waiting for his date to pick him up on prom night.

“They’re still pretty scary,” says MacKenzie. “Mostly just lip-smacking, drooling, sweating, I do a lot of staring at my hands when I’m in a focal seizure.

Now, the 20-year-old is back at the Halifax hospital, recovering from the special procedure.

MacKenzie says he didn’t notice much difference during the first procedure, but the second was more obvious.

“She was getting me to say some words and I was completely unresponsive of what to say, so I could kind of tell that my brain was frozen at that point,” he recalls.

Neurologist Dr. Kristen Ikeda says the test isn’t done on every patient, but only in cases where questions remain.

“We would typically use it in someone who, after they’ve had their full epilepsy investigation, there were still concerns about what the effect of surgery would be on their memory or language,” says Ikeda.

The testing only became available at the Halifax hospital this year. Patients previously had to travel to Montreal.

MacKenzie’s exam was only the second procedure performed at the QEII since February.