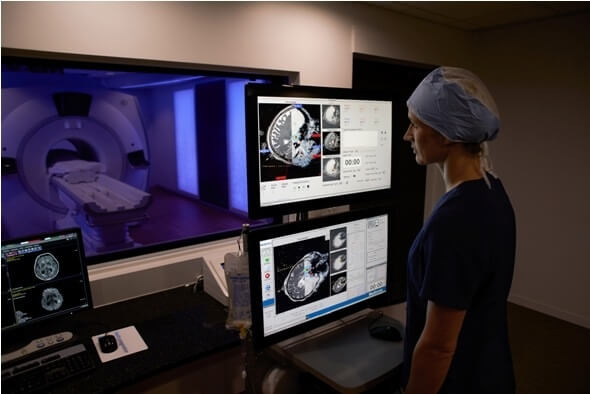 Medtronic plc (NYSE: MDT) announced today that the first procedure using the Visualase(TM) MRI-Guided Laser Ablation System has been performed in the pivotal SLATE (Stereotactic Laser Ablation for Temporal Lobe Epilepsy) clinical trial at Mayo Clinic in Rochester, Minn. The SLATE clinical trial is designed to support the expanded indication of the currently marketed Visualase(TM) system for treatment of patients with drug-resistant mesial temporal lobe epilepsy (MTLE), the most common form of partial or localization-related epilepsy.
Visualase technology works with MRI images for the precise destruction of the target.
“We’re excited about this important milestone and look forward to continued recruitment in this study – which will determine the utility of the technology as a surgical treatment for patients with drug-resistant MTLE,” said Co-Principal Investigator Michael Sperling, M.D., professor of Neurology at Thomas Jefferson University and director of the Jefferson Comprehensive Epilepsy Center at the Vickie and Jack Faber Institute for Neuroscience in Philadelphia, Pa.

Approximately three million people in the United States have epilepsy, with MTLE being the most common form of partial or localization related epilepsy. It is estimated that at least one-third of MTLE patients become drug resistant, continuing to have seizures regardless of the number or type of anti-epileptic drugs used.

“The data collected in this study will allow a comprehensive evaluation of the risks and benefits of the device in this new indication, ensuring that treating physicians are well-informed about its use,” said Co-Principal Investigator Robert Gross, M.D., Ph.D. MBNA/Bowman professor of Neurosurgery and director, Functional, Stereotactic & Epilepsy Surgery Division at Emory University, Atlanta, Ga.

During the clinical trial, approximately 120 adult patients with drug-resistant MTLE will be treated at selected epilepsy centers across the United States. Emory University, Mayo Clinic, Northwell Health, Thomas Jefferson University Hospital, and University of Miami Health System are some of the institutions that will be enrolling patients in the clinical trial. After the Visualase procedure, subjects will be followed for 12 months and evaluated for freedom from seizures, quality of life, adverse events and neuropsychological outcomes. Additional information about the SLATE study and sites enrolling can be found at https://clinicaltrials.gov/ct2/show/NCT02844465.

“The SLATE study is an example of Medtronic’s commitment to conduct rigorous clinical research in partnership with physicians and providers. Such collaborations offer the opportunity to better serve patients through the development and analysis of new technologies and indications,” said Brett Wall, senior vice president and president of Medtronic’s Brain Therapies division, which is part of the Restorative Therapies Group. “A study such as SLATE offers the opportunity to gather clinical evidence that can help us transform the way epilepsy is treated.”