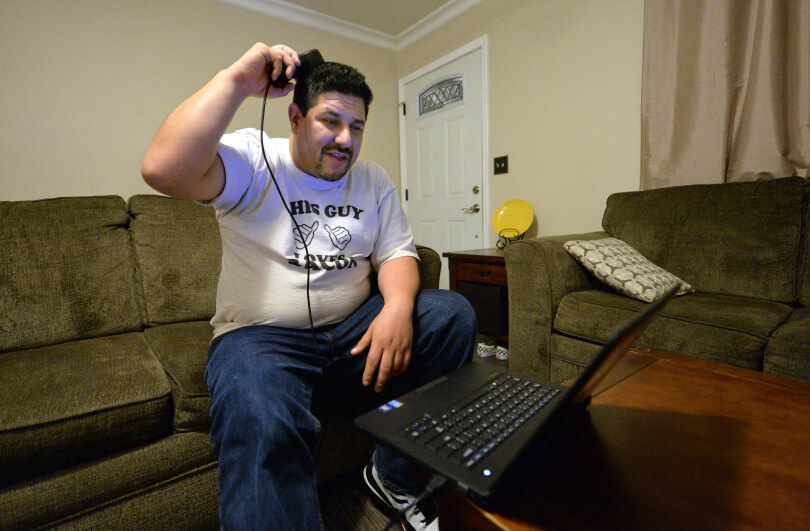 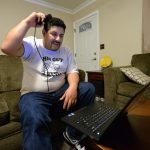 Imagine a seismograph — the instrument that measures and records earthquakes and volcanic eruptions — for your brain.

Except this one has a wireless link to a device implanted in your head that stops epileptic seizures at their source, halting the sudden and violent attacks before they happen.

For more than 1,000 Americans with the disorder, like 43-year-old Richard Lopez, the system invented by a Silicon Valley medical technology firm has given them back their lives.

If all goes well, Lopez will reach a major goal on Thursday: no seizures for 365 days, the longest peace of mind he’s had since his first epilepsy attack as a teenager.

“I just want to hold up that sign that says ONE YEAR SEIZURE-FREE,’’ said the Tracy father of three of the well-known benchmark that fellow epileptics post on the website of the Epilepsy Foundation to mark their breakthroughs. “I love when people do that.’’

Today, 3 million Americans — including 380,000 Californians — suffer from epilepsy, which is associated with abnormal electrical activity in the brain.

Experts say the causes of epilepsy are generally unknown, though some cases may be genetic, while others can be brought on by head trauma, stroke or central nervous system infection.

Most of those who suffer from the disorder require medication only to keep their condition in check. For others, however, removing the part of the brain that is causing seizures may prove most effective in ridding victims of their attacks.

But the so-called responsive neurostimulation system, or RNS for short, developed by Mountain View-based NeuroPace, treats adults with epilepsy who don’t respond to medication or for whom surgery is too risky.

According to the Institute of Medicine, 800,000 Americans still experience seizures despite taking anti-seizure medications.

Frank Fischer, NeuroPace’s president and CEO, said studies show that after a patient tries two anti-seizure medications, the chance that a third medication will control seizures is less than 5 percent. “Your quality of life is reduced because of the inability to participate in all of the things we take for granted, like driving,” Fischer said.

With the RNS system, a neurosurgeon positions the leads of the device at the sources of the seizure and places a neurostimulator in the person’s skull. Most patients go home the next day.

Dr. Vikram Rao, a neurologist at UC San Francisco’s Epilepsy Center, called the system “a game changer’’ because it helps a large group of patients who have no other alternative to reduce or end their seizures. He compared the system to cardiac pacemakers that detect abnormal heart rhythms, then deliver electrical stimulation to prompt the heart to beat normally. “That’s an analogy people can relate to,” Rao said.

Lopez still recalls his first grand mal seizure on a sizzling summer day in the mid-1980s, not long after moving to San Jose from Fresno. He’d gone with friends to Great America and was just stepping off the log flume ride when he began falling backward. He had no memory of losing consciousness or the violent convulsions that followed.

Medics gave his anxious parents some troubling news: It might be epilepsy.

Doctors soon confirmed the diagnosis. And for the past three decades they have prescribed what Lopez calls “the whole roster of epilepsy medications’’ that has sometimes controlled his chronic seizures — but that “basically wipe you out.’’

The litany of drugs and even prior neurological surgery proved mostly ineffective in halting his attacks until Lopez’s years-long quest for relief led him to Dr. Masud Seyal, director of the UC Davis Comprehensive Epilepsy Program. He recommended trying RNS.

Unlike medications and other medical devices that deliver therapy whether or not someone is having a seizure, the implanted RNS system continuously monitors the brain’s activity and is programmed to detect and record specific patterns that can lead to a seizure. The neurostimulator responds with brief pulses of electricity that disrupt the abnormal brain activity before a seizure occurs.

Each patient also receives a 24/7 remote monitor with special software and a handheld wand. The setup wirelessly collects information from the implanted device and sends it to a database that allows physicians to review seizure activity and manage treatment progress.

At first, however, Lopez said the results were discouraging because the seizures continued, though not as frequently. His doctor was able to fine-tune the device, however, which stemmed the attacks. Also, like most RNS patients, he must still take his medications.

It’s a similar story for 23-year-old Adison Malkiewicz, a recent San Jose State graduate plagued by epileptic seizures since she was first diagnosed when she was 11.

For years, medications sapped her concentration and energy. And while the drugs thwarted some seizures, she said, they didn’t stop them altogether. A different nerve stimulation device implanted in her chest wall, with wires leading to a nerve in her neck, didn’t work either. So by March 2015, her doctors recommended giving the RNS system a try, Malkiewicz said.

Richard Lopez Jr., of Tracy, who has epilepsy, uses a monitor that is connected to a computer at his home to collect information from a small neurostimulator in his skull to a Patient Data Management System in Tracy, Calif., on Friday, Feb. 22, 2017. Lopez, who has had grand mal seizures since he was a teen, had a device implanted in his skull that works like a pacemaker for the brain to stop the seizures. The $40,000 implantable neurostimulator device is made by a Mountain View firm called NeuroPace. (Doug Duran/Bay Area News Group)

The RNS system is not cheap: It costs $37,000, though both Lopez and Malkiewicz say their insurance covered the cost.

Fischer said NeuroPace clinical trials have showed median seizure frequency reductions of 44 percent at one year post-implant, 53 percent at two years, and 60 percent to 72 percent at three to seven years.

Like Lopez, Malkiewicz said the NeuroPace system initially didn’t work well. She continued to have seizures. She knew seconds beforehand because she’d see moving colors and lights — and the room “melting’’ in front of her. “It can be very scary,’’ she said.

But six months later, the attacks had lessened, and she has not experienced any since September 2015.

“Of course, it is one person’s experience, and I cannot say it will work for everyone,’’ said Malkiewicz, who is now driving and starting a job teaching special education. “But it has changed my life for the better.” 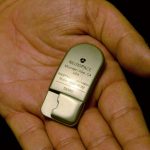 Richard Lopez Jr. of Tracy, who has epilepsy, holds a demonstration neurostimulator device that is identical to the one implanted in his skull at his home in Tracy, Calif., on Friday, Feb. 22, 2017. Lopez, who has had grand mal seizures since he was a teen, had the pacemaker-like device implanted in his skull to stop the seizures. The $40,000 implantable neurostimulator device is made by a Mountain View firm called NeuroPace. (Doug Duran/Bay Area News Group)