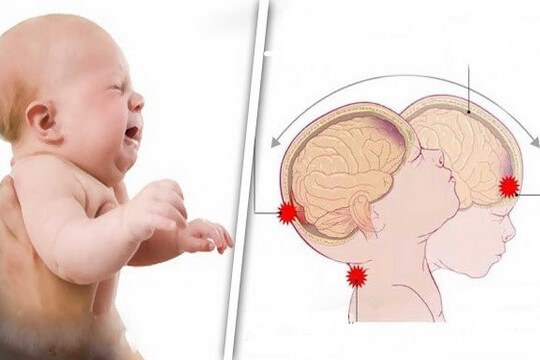 Shaken Baby Syndrome: The Very Serious Damage Of Violence On The Newborn Child

Shaken baby syndrome (also called by the acronym SBS, or abusive head trauma or shaken baby syndrome) is a very serious form of physical abuse, mainly – but not exclusively – intra-familial abuse of children generally under one year of age (infants and young children)

The causes of SBS are the rapid and violent shaking of the child, which generally occurs over a period of 10-20 seconds.

The baby is shaken violently by the caregiver, usually the father, mother, grandparent or guardian, as an exaggerated reaction to the baby’s inconsolable crying.

The peak incidence of SBS occurs between 2 weeks and 6 months of age, the period of maximum intensity of infant crying.

At that age a shaking movement is particularly dangerous, because

Parents in the first months of a baby’s life, and particularly in the case of a first-born child, are subjected to great stress and sleepless nights that can lead to such exasperation that – at the umpteenth cry – they cause totally irrational reactions, such as shaking the baby violently.

A risk factor that can trigger violent and irrational behaviour towards a newborn child is post-partum depression.

Consequences for the baby of SBS

The consequences of shaking can unfortunately be particularly inauspicious, especially at the nerve level, and are similar (and often worse) to those that can occur in a rear-end car accident: subdural or subarachnoid intracranial haemorrhages, brain contusions and direct nerve fibre lesions are fairly typical events and can lead to brain death of the baby.

Shaking causes a mechanical damaging action related to the abrupt accelerations and decelerations to which the encephalon, cerebral vessels and more generally all tissues are subjected, which – in simple terms – literally slam against the skull back and forth.

The forces generated by the shaking can cause the brain’s white matter axons to stretch and sometimes completely rupture.

The shaking can easily lead to permanent neurological damage with even very severe motor and/or sensory deficits such as paralysis, slowed psycho-motor acquisition, cognitive-behavioural deficits, deafness, retinal haemorrhages, often resulting in central blindness, multiple fractures, mostly of the skull (if there is also impact on the surface), long bones and posterior portion of the ribs.

This can lead to coma or death of the child in one out of four cases.

Shaken baby syndrome: “So much damage from one shake?”

Certainly yes: even a fairly weak and short-lasting shake, which is harmless in an adult, can have disastrous effects on the baby, and it is not by chance that one of the most important precautions in the first months of life is precisely to prevent the baby’s head from being supported.

Some peculiar anatomical features of newborns and infants favour the occurrence of the biomechanical damage already described: fundamental is the considerable volume and weight of the head in relation to the rest of the body mass, the hypotonia of the cervical paraspinal musculature (which causes the typical ‘dangling’ of the head in the first months of life), the high water content of the immature central nervous system, the incomplete myelination of the nerve fibres and the high volume of the subarachnoid spaces compared to the still modest brain volume.

Tracing certain lesions to the syndrome may not be entirely easy: they can often be confused with lesions caused by trauma during play.

A thorough investigation by the paediatrician, forensic scientist and law enforcement is always necessary.

Retinal haemorrhages can also potentially be diagnosed with MRI.

The Anglo-Saxon term ‘Shaken impact syndrome’ denotes a variant of ‘shaken baby syndrome’, in which the child is not simply shaken furiously, but is thrown violently against a fixed surface, not necessarily hard and rigid, such as a bed.