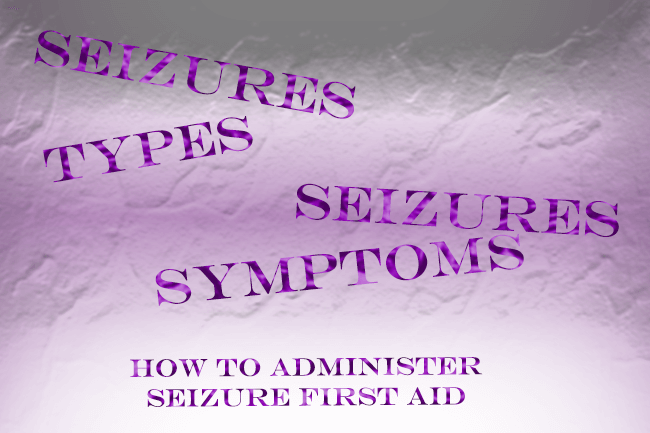 Seizure Types and Symptoms, and How to Administer Seizure First Aid

The most commonly known seizure causes uncontrollable shaking and jerking movements. But in other types, a person might fall down or become very still. Sometimes, it can be difficult to tell that someone is having a seizure at all.

Neurons, or nerve cells, send information from your brain to your body. They do this by releasing electrical impulses in an orderly fashion.

If this electrical activity suddenly increases, it can cause a seizure. It occurs when many neurons rapidly release disorganized electrical impulses, causing uncontrollable and temporary symptoms.

Recognizing the different symptoms of seizures can help you determine the type. Read on to learn how seizures are classified, which symptoms they cause, and what to do if a seizure occurs.

There are many types of seizures. Each one causes different physical and behavioral changes.

Not all seizures are due to epilepsy, a condition characterized by recurring seizures. Some people only have one seizure in their lifetime.

Seizures are classified based on the parts of the brain involved. They include focal and generalized seizures.

Focal seizures are common and occur on one side of the brain. Approximately 60 percent of people with epilepsy have focal seizures.

During a focal aware seizure, previously called a simple focal seizure, you do not lose consciousness. You’re aware of yourself and surroundings.

Symptoms can include one or more of the following:

This seizure may last between a few seconds and 2 minutes.

A focal impaired awareness seizure happens when your consciousness is partially or completely lost. It used to be called a complex focal seizure or complex partial seizure.

You won’t be aware of yourself and surroundings, but you’ll seem awake. Possible symptoms include:

This seizure typically lasts between 1 and 2 minutes. After the seizure, you may feel sleepy and confused.

This seizure occurs when a focal impaired awareness seizure becomes generalized or spreads to both sides of the brain. It used to be called a secondary generalized seizure.

It often causes clonic jerking and tonic muscle stiffening. Jerking arm and leg movements can occur along with facial twitching, impaired control of the bowel or bladder, and repeated flexing and relaxing of the muscles.

This seizure lasts between 30 seconds and 3 minutes.

These seizures begin in the hypothalamus, which is located at the base of the brain.

There are many kinds of generalized seizures, including:

It consists of two types of movements. The tonic and clonic movements involve:

A GTC seizure may last 1 to 3 minutes.

A tonic seizure only causes muscle stiffening. It sometimes occurs during sleep and involves muscles in the:

Tonic seizures may cause people to fall down if they are standing or walking when the seizure occurs.

These seizures only involve repeated muscle jerking, or clonic movements.

There are two types:

Absence seizures are more common in children than in babies or adults.

A myoclonic seizure causes sudden muscle jerking without impaired consciousness. It typically involves muscles on both sides of the body.

Generally, these seizures last for 1 or 2 seconds. They often happen multiple times within a day or several days.

In an atonic seizure, or drop attack, you suddenly lose muscle tone. Symptoms include:

An epileptic spasm involves brief extending or flexing of the arm, leg, or head. It commonly affects children younger than 2 years old. If it occurs in an infant, it’s often called an infantile spasm.

These spasms last 1 to 3 seconds. They usually reoccur every few seconds over 10 minutes, which can happen several times a day.

Some disorders may cause symptoms that look like epilepsy. However, these disorders require different treatment and care. They include:

A febrile seizure occurs when a child between 6 months and 5 years old has a fever. It may be the first sign that a child is sick.

There are two types:

Febrile seizures tend to run in families and are more common in babies and children than in adults.

NEE, or pseudoseizures, are associated with extreme stress and psychological disorders. They aren’t caused by abnormal changes in the brain’s electrical activity.

These seizures most commonly affect people who have:

NEE may look like GTC seizures. But unlike GTC, they cause muscle jerking that’s out of phase and not rhythmic. Nonepileptic events are more common in adults than in babies and children.

Tics are repeated patterns of involuntary movement that happen while a person is conscious. They usually affect one side of the face, but they can affect the neck, shoulders, or other areas of the body.

They can come in the form of physical tics or verbal tics. Some conditions involving tics include:

While tics can be suppressed temporarily by the person experiencing them, they often have to be expressed once the person relaxes.

Types of seizures in adults

In adults, the most common seizures are:

Types of seizures in babies and children

Both children and babies can experience seizures.

Do all seizures have the same causes?

Any event or condition that disrupts the brain can cause seizures. There are many possible causes.

Sometimes, the cause of a seizure is unknown.

Complications and risks of seizures

Having a seizure can pose safety risks, including:

What to do if you’re having a seizure

Some seizures cause symptoms just before they start.

If you notice these warning signs, here’s what you should do:

How do you help someone who is having a seizure?

If another person is having a seizure, try to stay calm. Keep them safe by following these steps:

Note what time the seizure begins. It should last only a few minutes.

A seizure that lasts longer than 3 minutes warrants emergency help.

If it’s your first seizure, be sure to see a doctor. You should also consult a doctor if:

The symptoms of seizures vary by type. Some seizures cause uncontrollable jerking movements, while others cause muscle stiffening or falling. They may also involve involuntary laughing, blank staring, or hand motions.

If someone is having a seizure, clear the area and guide them slowly to the floor. Avoid holding them down or putting anything in their mouth. This will keep them safe and prevent injury. If the seizure lasts longer than 3 minutes, call 911.