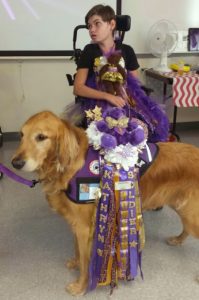 Kathryn Campbell and her pup Soldier are together 24/7 — at home, at school, beside each other in bed every night.

So it makes perfect sense that the 5-year-old pooch would share a page with his best friend in The Creek Yearbook — serving as a sweet reminder of everything the two have done together during their freshman year (the school’s newspaper offered the world a peek at the page on Facebook on May 16, the day the book became available)

.Kathryn, who was diagnosed at 15 months old with PDD-NOS, one of the four autism spectrum disorders, started having seizures at age 10. Her mother, Kim Campbell, describes her then as “a very happy and active little girl.”

In May 2012, Kathryn had a partial lobectomy and in January 2013, a right hemispherectomy, both to help ease the seizures.

“Since that time, she has regressed to the point where she almost never smilesand doesn’t talk to us anymore,” says Campbell, a math teacher at Tarrant County College. “She also is left hemiplegic — she has no use of the left side of her body.”

Soldier, who came to the Campbells in June 2013 from 4 Paw for Ability in Xenia, Ohio, was originally trained to do autism interventions for Kathryn — like tracking, assisting with mobility and seizure alert, Campbell says — but “because of Kathryn’s change in circumstance, his primary job for her now is seizure alert, best friend and constant companion.”

Kathryn has seizures daily, sometimes multiple times a day, and Soldier is there to sound the alarm, typically about 45 minutes before a seizure occurs.

“He gets extremely attentive to Kathryn, will lick her left hand, foot, or ear, and whines at us until he is sure he has our attention,” Campbell tells PEOPLE. “That time allows us to make sure we have rescue meds and oxygen, and be sure we are not in transition or transporting her when the seizure hits. Soldier also barks to alert during a seizure; this is the only time he ever barks, so it is certain to get our attention if we haven’t noticed!”

Because a nurse goes to school with Kathryn, the family knew that the handsome dog had a yearbook picture taken just like the other students. 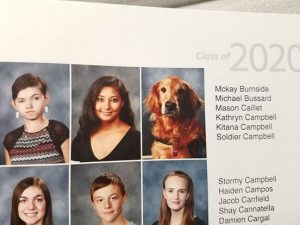 “He had his own homecoming mum and the school paper did an article about them at that point, so we weren’t surprised that he was going to be pictured in the yearbook with her, although we were thrilled!” Campbell says.

It was a pleasure to see the pooch, who keeps Kathryn safe, recognized — “He is as much a part of the student body as all the rest, lol,” she says in an email — and it’s clear there’s a deep appreciation for all the ways the dog helps out everyday.

“He is a constant for Kathryn, which is even more important since she is unable to communicate her needs, emotions and concerns to us,” Campbell explains. “He is with her through doctor’s visits and hospital stays.”

It sounds like, in a way, they both look out for each other. “On the rare occasion he is gone to the groomer or vet, you can see her looking for him,” Campbell says. “Not only is his presence a comfort for Kathryn, but he provides a calming presence for all of us, especially during long nights full of seizures.”

“When we first got Soldier [in 2013], she could play fetch with him and was so very excited.  She couldn’t wait to get her dog,” adds Campbell, who is also mom to Gracie, Christine, Derek — all graduates of the high school — Carson, a senior, and Kitana and Stormy, both freshmen. “We know she loves him, just like we know she loves us, even though she can’t tell us anymore.”