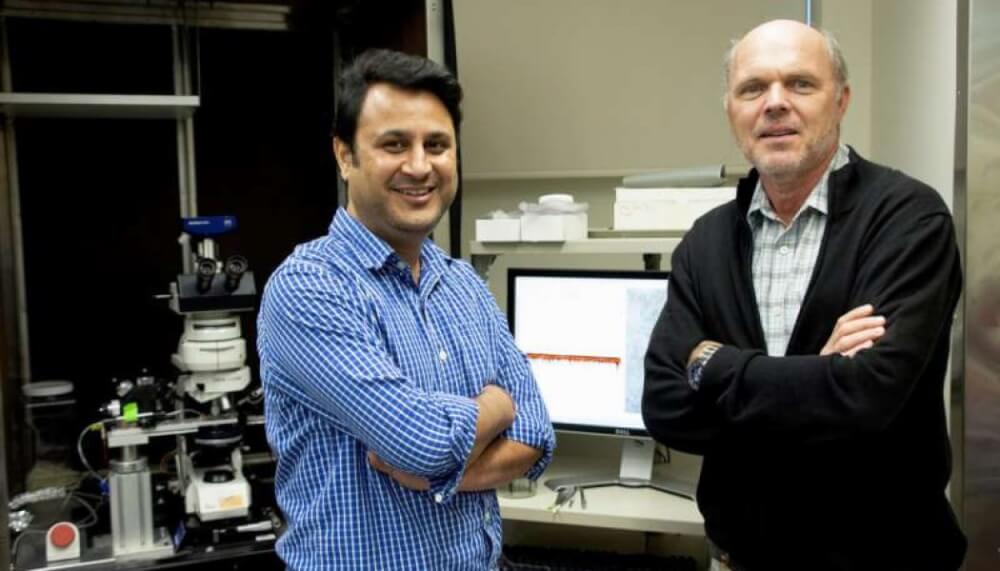 Scientists at the Virginia Tech Carilion Research Institute have solved a 125-year-old mystery of the brain, and, in the process, uncovered a potential treatment for acquired epilepsy.

Since 1893, scientists have known about enigmatic structures called perineuronal nets wrapped around neurons, but the function of the nets remained elusive.

Now, a research team led by Harald Sontheimer, the director of the VTCRI Center for Glial Biology in Health, Disease, and Cancer and the executive director of the School of Neuroscience, part of the Virginia Tech College of Science, has determined the nets modulate electrical impulses in the brain. What’s more, brain seizures can occur if the nets are dissolved.

A research team led by Harald Sontheimer (right), a professor at the Virginia Tech Carilion Research Institute, has discovered mysterious brain structures called perineuronal nets to help modulate electrical impulse activity in the brain. The team, which include first author and postdoctoral fellow Bhanu Tewari (left), may be able to target the nets to treat some cases of acquired epilepsy. Credit: Virginia Tech

The discovery, published today in Nature Communications, has implications in various forms of acquired epilepsy, a type of seizure disorder that results from brain lesions caused by trauma, infection, or tumors in the brain.

“We started by investigating tumor-associated epilepsy, and we accidentally learned something else important about how the brain works in disease and in health,” Sontheimer said.

The researchers initially made their finding in a mouse model of epilepsy caused by the deadly brain cancer known as glioblastoma, the first symptom of which is often a seizure.

Glioblastoma is tnly cancer whose growth is restricted by space. Since the skull blocks the cancer from expanding outward, the tumor produces an excitatory chemical neurotransmittercalled glutamate in excessive amounts that kills neighboring healthy cells to make room to grow.

The researchers saw that glutamate targeted brain cells producing a different chemical neurotransmitter called “GABA,” that usually calms neurons by inhibiting them from firing electrical impulses once the messages are relayed. Without GABA, the brain becomes too excited and can seize.

In addition to glutamate, the tumor also secretes an enzyme aimed at destroying the surrounding extracellular matrix, a gel-like substance that holds brain cells in place. Glioblastomas are highly malignant and notoriously invasive—the enzyme is the knife that cuts the cancer’s tethers and lets it migrate freely.

“Unexpectedly, we also saw the enzyme attacking the perineuronal nets,” Sontheimer said, noting that the nets are primarily found wrapped around the GABA-secreting inhibitory neurons, which help prevent seizures. “It was a surprise to see this bystander effect of seizure activity once the neurons were stripped of their nets.”

Italian neurobiologist Camillo Golgi was the first to identify perineuronal nets in 1893, but he misunderstood their function. Golgi called the nets “corsets,” and said they most likely impeded messaging between neurons.

To the contrary, Sontheimer found the nets enabled messaging. The neurons covered by perineuronal nets have a reduced membrane capacitance or ability to store electrical charge, meaning that they can fire an impulse and reload up to twice as fast as non-netted neurons.

When the inhibitory neurons suddenly lose their perineuronal nets, the results can be catastrophic. The researchers applied the enzyme to brains without tumors and saw that on its own, the enzymatic degradation of the perineuronal nets was enough to induce seizures—even when the neurons were left intact.

“Without the perineuronal nets, inhibitory neurons would fire too slowly and therefore inhibition becomes too little, too late, and a seizure will occur—even in otherwise healthy brains,” Sontheimer said, noting that the enzyme can devour a perineuronal net in less than 30 minutes. “No one thought that these structures would have such a profound effect on how normal processes operate.”

Now, the researchers are studying how perineuronal nets might play a role in other forms of acquired epilepsy, which can result from head injury or brain infection. Such elucidation could lead researchers to discover potential pharmacological solutions.

“Importantly, the finding that tumor-induced disruption in perineuronal nets contributes to imbalanced inhibitory neurotransmission suggests a new target for therapeutic intervention to control tumor-associated seizures,” said H. Steve White, a professor and chair of the Department of Pharmacy in the University of Washington’s School of Pharmacy in Seattle, Washington.

White, a renowned expert in epilepsy and anticonvulsant drug development research, was not involved in Sontheimer’s study.

“Although additional studies are needed, it is likely that the findings reported by Dr. Sontheimer and his team are applicable to other forms of acquired epilepsy where brain injury is associated with a heightened inflammatory response,” White said, noting that the implications for treatment and prevention of epilepsy are particularly striking since current therapies are aimed at controlling seizures. “While controlling the symptoms of the disease is significant, the results of this study suggest a possible path toward modifying the development and progression of epilepsy, which would lessen the overall burden to the patient.”

More than 50 million people worldwide have epilepsy, according to the World Health Organization. About a third of those individuals don’t respond to current anti-epileptic treatments.

“If we confirm our hypothesis that digested perineuronal nets are responsible for other forms of acquired epilepsy, then a potential treatment could be an enzyme inhibitor,” Sontheimer said.

He noted that one such an inhibitor is already approved by the FDA for other uses but he also cautioned that there’s a significant amount of research to conduct before their hypothesis is confirmed.

“We need new approaches to treat epilepsy. I think this could be an effective way to control seizures,” Sontheimer said. “And we solved a 125-year-old neuroscience mystery! This is what basic science is all about—keeping an open and observant mind to answer questions old and new.”