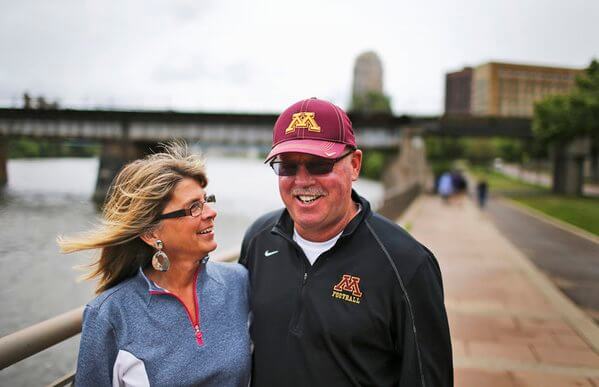 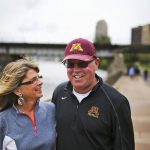 While coaching football, Jerry Kill taught us about epilepsy

If there’s a guy you could root for in Minnesota sports, it was U of M football coach Jerry Kill, if only to mute the sportswriters who wanted him fired a few years ago when his epilepsy caused him to collapse on the sidelines at several games.

“The face of your program can’t belong to someone who may be rushed to the hospital at any moment of any game, or practice, or news conference,” the Star Tribune’s Jim Souhan wrote in September 2013. “No one who buys a ticket to TCF Bank Stadium should be rewarded with the sight of a middle-aged man writhing on the ground. This is not how you compete for sought-after players and entertainment dollars.”

“Is it possible a coach can be sick and still be a good and inspiring coach?” I asked at the time.

When he was in Houston last season for a bowl game, a boy asked a question of Kill at an event.

“I have epilepsy,” the boy said. “Do you think I’ll ever have a girlfriend?”

A lot of healthy people have proven they can’t coach at the University of Minnesota.

Kill proved to be the inspiration we’d imagined, educating us about an illness that we once thought indicated a person was possessed. He also won a football game or two.

But this is not a time of happy endings in Minnesota sports.

“I’ve coached this game for 32 years. My daughter’s been on the sidelines with me for 21 and my wife’s been in this thing for 32, and my youngest one’s been in it. It’s hard on all of us, but certainly my family. And my daughter’s walked that sideline for all those years,” a visibly devastated Kill told a news conference this morning. “I’ve given every ounce I have for 32 years and the kids I’ve been able to coach. I never stole from anybody, I’m not going to steal now.”

“You all know about the struggles and some of those struggles have returned,” he said. “And I don’t want to cheat the game.”

The urgency, the timing, and the history messages us that this isn’t going to be good news for one of the best educators the University of Minnesota ever had.

University of Minnesota head football coach Jerry Kill announced today that he is retiring from his position effective immediately due to medical concerns. Kill is stepping away from college football with a career record of 156-102 and a 29-29 mark at Minnesota.

Claeys served as Minnesota’s Acting Head Coach for seven games during the 2013 season when Kill took time to focus on his health. Minnesota was 4-3 with Claeys was the Acting Head Coach and posted wins against Northwestern, Nebraska, Indiana and Penn State.

Kill was named Minnesota’s head coach on Dec. 7, 2010, and took the Gophers to heights not seen in recent years. Last season, Kill led Minnesota to a January 1 bowl game for the first time since 1962 and coached the Gophers to wins against Michigan and Iowa, which had previously not happened in the same season since 1967. Under Kill’s direction, Minnesota also erased a 14-point halftime deficit at Nebraska to beat the ranked Huskers on the road for the first time since 1960. Minnesota won eight games in both 2013 and 2014, which marked only the fifth time since 1906 that Minnesota won eight games in consecutive seasons.

The NFL also took note of Kill’s rebuilding of the Minnesota program, as six Gophers were selected in the last two NFL Drafts. In 2014, Ra’Shede Hageman was selected in the second round by the Atlanta Falcons and Brock Vereen was a fourth-round pick of the Chicago Bears. In 2015, Maxx Williams was taken in the second round by the Baltimore Ravens, while Damien Wilson (fourth round to the Dallas Cowboys), David Cobb (fifth round to the Tennessee Titans) and Cedric Thompson (fifth round to the Miami Dolphins) also heard their named called by NFL teams.

Kill’s rebuilding of the Minnesota program also took place in the classroom. The Gophers recorded a 994 Academic Progress Rate (APR) for the 2013-14 season as well as the 2012-13 and 2011-12 seasons. The 994 score is the highest single-season score that the Minnesota football team has ever recorded and the Gophers’ multi-year rate of 975 is also a school record.

Kill By the Numbers:

6 NFL Draft picks in his tenure at Minnesota

15 Winning seasons (out of 21) as a collegiate head coach

“I know people will ask, ‘Coach, what are you going to do?’” he said today. “I don’t know. That’s the scary part. I don’t know how to do anything else.”

Kill said he met with his players early this morning and he told them what he’s been telling them for years.

“You can’t do football forever.”