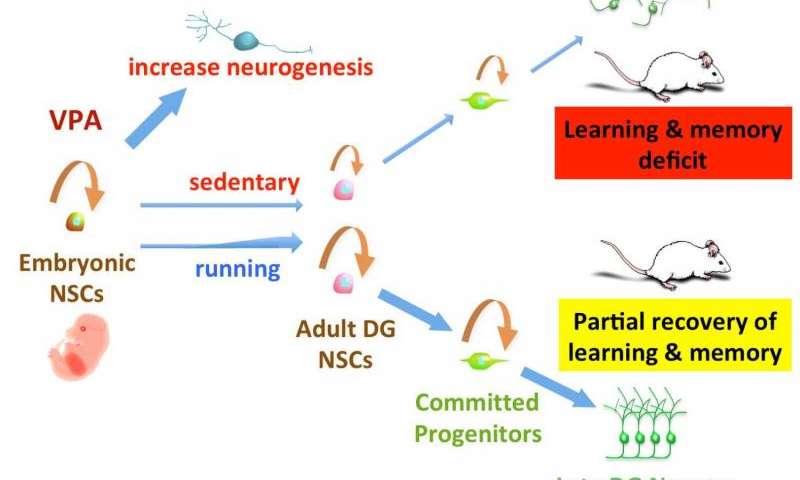 Running May Prevent Side Effects of AEDs 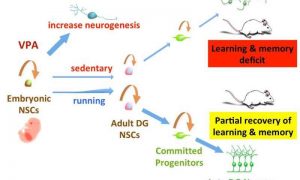 The simple act of running may be sufficient to prevent long-term cognitive impairments caused by prenatal exposure to antiepileptic drugs, according to a study published November 19th in Stem Cell Reports, the journal of the International Society for Stem Cell Research. The findings revealed that prenatal exposure to a commonly used antiepileptic drug called valproic acid (VPA) inhibited the birth of new neurons in the brains of adult mice and impaired their performance on learning and memory tasks. Remarkably, these postnatal side effects were largely prevented when the mice were given access to a running wheel at a young age.

“Currently, the children of epileptic women who take VPA during pregnancy suffer cognitive deficiencies without any available methods for prevention or treatment,” says senior study author Kinichi Nakashima of Kyushu University. “If the findings are supported by future clinical trials in humans, then voluntary exercise could be considered as a way to improve the intellectual functioning of these children.”

Epilepsy is one of the most common neurological disorders globally, affecting an estimated 50 million people worldwide. Approximately 30% of sufferers are women of childbearing age, and antiepileptic drugs such as VPA are commonly given during pregnancy. But recent studies in humans have suggested that prenatal exposure to these drugs could lower IQ scores and cause wide-ranging cognitive deficits in childhood. Because the underlying molecular mechanisms are unclear, there are currently no effective treatments for affected children of epileptic mothers who took antiepileptic drugs during pregnancy.

In the new study, Nakashima and his team found that prenatal exposure to VPA enhanced the birth of new neurons in the brains of embryos, rapidly depleting the pool of neural precursor cells. As adults, these mice showed a decrease in the birth of new neurons in a brain region called the hippocampus, as well as deficits in several learning and memory tasks. But voluntary exercise on a running wheel for two months at a young age increased neurogenesis in the hippocampus and largely prevented learning and memory deficits.