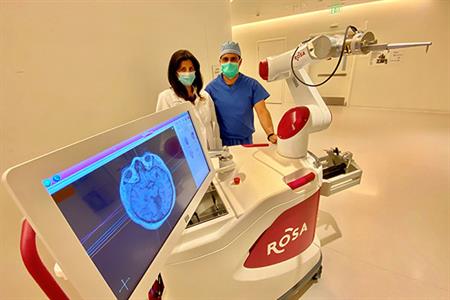 Neurosurgery is among the most challenging branches of surgery. The human brain, with its estimated 100 billion neurons and 100 trillion connections, is arguably the most complex biological structure known, and surgeons must often operate within the narrow confines of the brain, spinal cord and nervous system.

Sometimes it’s good to have another set of “hands,” a ROSA by another name.

ROSA is short for Robotic Stereotactic Assistance, and within the Department of Neurosurgery at UC San Diego Health, the leading-edge technology is at hand.

Of the many procedures in which ROSA can assist, it shines perhaps brightest during stereotactic electroencephalography (sEEG), an intracranial monitoring procedure in which 10 to 20 thin electrodes (less than 1 millimeter in diameter, about the thickness of a credit card) are inserted into the brain to precisely map the locations from which epileptic seizures emanate.

Sharona Ben-Haim, MD, the UC San Diego Health neurosurgeon who introduced sEEG to the San Diego region five years ago, calls the procedure “much faster and safer now, and with the efficiency and accuracy that only a robotic platform can provide.”

Sage Magaña, 18, recently underwent the ROSA-assisted procedure. Two years ago, she was diagnosed with frontal lobe epilepsy, with a typical day interrupted by up to five seizures lasting for as much as five minutes each. It would sometimes require weeks to fully recover from the most severe episodes.

“I wake up after a seizure and I limp, I cry, it’s horrible,” said Sage, who lives with her parents in Vista. “I have pain in my head, my jaw and my tongue and cheeks from biting them. It’s taken everything away from me. It has stopped my whole entire life.”

Because of her seizures, Sage dropped out of high school after her sophomore year. Driving is a distant memory. Hers is not the typical life of a teenager.

Only a very specific type of patient is likely to receive sEEG, someone for whom brain surgery has become a last resort due to drug-resistant epilepsy. Sage said the seizure drugs she tried “worked somewhat, but not enough,” and that most produced adverse side effects, such as making her feel “loopy” and “angry when I’m not.”

Sage opted for surgical intervention at the recommendation of Ben-Haim and Jerry Shih, MD, director of the Epilepsy Center at UC San Diego Neurological Institute, following a multidisciplinary conference about her case.

Based on Sage’s MRI scan, Ben-Haim programmed into ROSA where each electrode should be inserted, after which ROSA’s robotic arm pivoted to the precise positions for each insertion.

“Each of the electrodes is planned with great accuracy to enter and terminate (end) in a certain part of the brain, and to map specific anatomical features along its trajectory,” said Ben-Haim, the only neurosurgeon in San Diego County currently performing ROSA-assisted sEEG on adults. (Rady Children’s Hospital-San Diego has a ROSA for pediatric cases.)

“Where the electrodes go is very specific for each patient, based on a very extensive preoperative workup that we do.” (Before the advent of sEEG, neurosurgeons placed grid, strip and depth electrodes for intracranial monitoring. These were often very complicated procedures.)

When she emerged from anesthesia following the sEEG procedure at Jacobs Medical Center at UC San Diego Health, Sage said she “felt a little bit of pain, but it was very bearable — especially knowing that this is my chance to get my life back.”

The electrodes remained inside Sage’s brain for a week, mapping her seizures. The resulting data (still being analyzed) will help determine the best treatment. This can include laser-assisted ablation or resection in the region of the brain causing the seizures.

“I just want to just stop the seizures,” Sage said, so that she can pursue a normal life and perhaps a career helping others through their epilepsy journeys.

“I want to be that person for someone else,” she said.