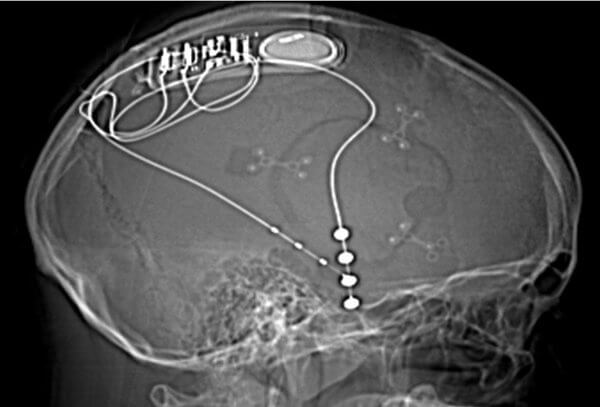 Since 2007, Hood had suffered from debilitating seizures that a powerful mix of medications couldn’t control.

Hood, 47, is one of the first people in the nation to get a new device implanted in her brain that monitors for signs of seizures and sends impulses directly to the source to quiet the storm.

Before undergoing brain surgery at the Cleveland Clinic in April, Hood suffered seizure activity as often as five times a day.

Now she experiences two or three auras a month that end before a full seizure begins.

“I feel it coming on very faintly and then it stops,” she said.

The NeuroPace RNS System is a “smart device” that monitors the brain’s activity, interprets the signals and provides stimulation when needed for patients’ intractable seizures.

The NeuroPace RNS is an improvement over other systems that provide stimulation without regard to the individual’s unique brain activity, said Dr. Dileep R. Nair, section head of adult epilepsy at the Cleveland Clinic and an investigator in the trial for the device.

“We teach the device to look for the specific pattern that patient has that’s associated with a seizure,” Nair said. “We try to stop that activity from moving anywhere else.”

More than 2 million Americans have epilepsy, a neurological condition with unpredictable seizures, or sudden surges of electrical activity in the brain, according to the Epilepsy Foundation.

The majority of people can control their epilepsy with medications, Nair said. But for about 30 percent of patients, anti-seizure drugs alone aren’t effective.

“In this group, the options really have been to see if they are epilepsy surgery candidates,” he said.

But resecting (or cutting out) the portion of the brain where the seizures originate isn’t always possible, particularly if the region is vital for movement or speech or if multiple parts of the brain are involved, Nair said.

For Hood, her seizures began about six months after she and her husband, Michael, got married at a local temple, where they met. She was a Hebrew teacher and he was a building manager.

While in the hospital after her first seizure, she struggled to remember recent events and important people in her life, even her husband.

“Who is that nice man?” she asked her mother, Elaine Williamson.

Over the next several years, medications failed to control her seizures, including a major episode that caused her to go into cardiac failure.

Every day, she experienced auras, a strange feeling “like a very, very horrific dream you’re having,” she said. “You can feel it coming on your body.”

Epilepsy surgery to remove the portion of her brain where the seizures started wasn’t an option because that region is responsible for her memory.

“If they removed a portion, then she would have no short-term memory at all,” her husband said.

Hood quit her job in sales, gave up driving and began staying close to home for fear of having a seizure or frightening aura.