In addition to being an online news network dedicated to the Epilepsy community, we also understand you have questions.  Lots of questions.  That’s normal.  We’ve put together this resource center to help answer some of these questions.  Below are a few categories of FAQs.

If the information is more detailed than a simple FAQ, then we have the Resource Topics on the right side.  You are always welcome to reach out to us with any other questions you might have.

Managing Students with Seizures: A Training for School Nurses

Managing Students with Seizures: A Training for School Nurses

Managing Students with Seizures is a continuing education training program designed to provide the school nurse with information, strategies and resources that will enable him/her to better manage the student with seizures by supporting positive treatment outcomes, maximizing educational and developmental opportunities, and ensuring a safe and supportive environment. The Managing Students with Seizures: A Training for School Nurses program is divided into three modules to assist the school nurse in learning to effectively manage seizures in a school environment.

Nurses can earn the following types of credits through the Centers for Disease Control and Prevention (CDC)’s Continuing Education Unit Online Education Center:

The School Nurse Training Program is a continuing education training program designed to provide school nurses with information, strategies and resources that will enable him/her to better manage students with seizures by:

Visit this site to begin your training.

What is Lennox-Gastaut Syndrome? 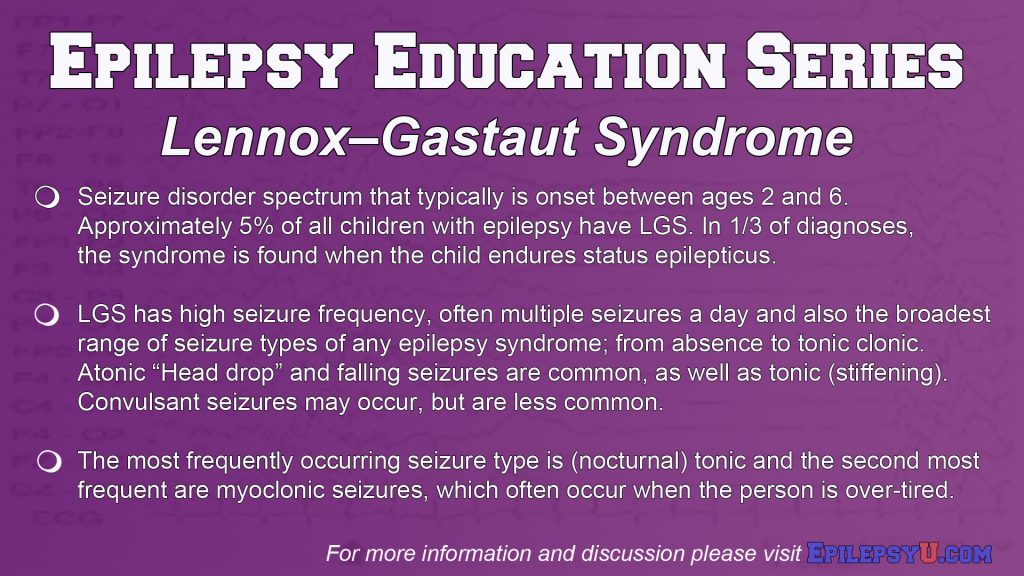 Lennox-Gastaut syndrome is a severe form of epilepsy. Seizures usually begin before 4 years of age. Seizure types, which vary among patients, include tonic (stiffening of the body, upward deviation of the eyes, dilation of the pupils, and altered respiratory patterns), atonic (brief loss of muscle tone and consciousness, causing abrupt falls), atypical absence (staring spells), and myoclonic (sudden muscle jerks). There may be periods of frequent seizures mixed with brief, relatively seizure-free periods. Most children with Lennox-Gastaut syndrome experience some degree of impaired intellectual functioning or information processing, along with developmental delays, and behavioral disturbances. Lennox-Gastaut syndrome can be caused by brain malformations, perinatal asphyxia, severe head injury, central nervous system infection and inherited degenerative or metabolic conditions. In 30-35 percent of cases, no cause can be found.

Is there any treatment?

Treatment for Lennox-Gastaut syndrome includes anti-epileptic medications such as valproate, lamotrigine, felbamate, or topiramate. There is usually no single antiepileptic medication that will control seizures. Children who improve initially may later show tolerance to a drug or have uncontrollable seizures.

What is the prognosis?

The prognosis for individuals with Lennox-Gastaut syndrome varies. There is no cure for the disorder. Complete recovery, including freedom from seizures and normal development, is very unusual.

What is Dravet Syndrome? 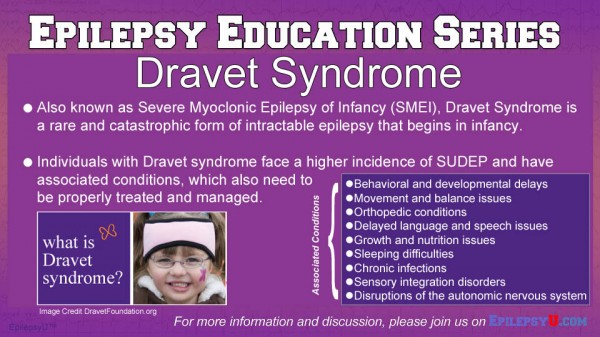 Dravet syndrome, also known as Severe Myoclonic Epilepsy of Infancy (SMEI), is a rare and catastrophic form of intractable epilepsy that begins in infancy. Initial seizures are most often prolonged events and in the second year of life, other seizure types begin to emerge. Development remains on track initially, with plateaus and a progressive decline typically beginning in the second year of life. Individuals with Dravet syndrome face a higher incidence of SUDEP (sudden unexplained death in epilepsy) and have associated conditions, which also need to be properly treated and managed. These conditions include:

What is the Treatment?

Unless a cure or better treatments for Dravet syndrome and related epilepsies are found, individuals with these disorders face a diminished quality of life. Current treatment options are extremely limited and the prognosis for these children is poor. The constant care and supervision of an individual with such highly specialized needs are emotionally and financially draining on the family members who care for these individuals.

What is the Prognosis?

Children with Dravet syndrome do not outgrow this condition and it affects every aspect of their daily lives.

What is the SCN1A Gene? 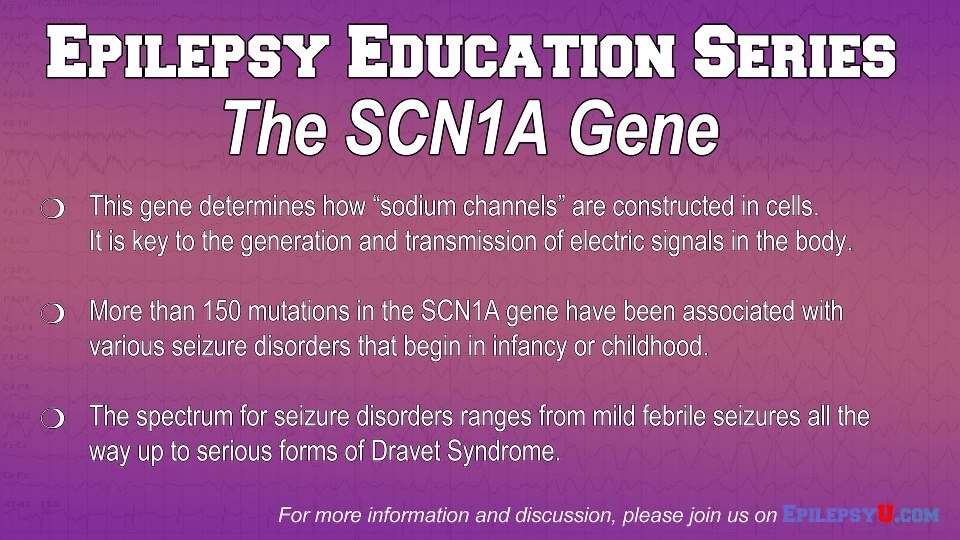 Mutations in the SCNA1 gene cause inherited febrile seizures and GEFS+, type 2.

Is there any treatment?

Symptoms of SCN1A gene mutations are usually treated with Anti-Epilepsy Drugs, (AEDs). Antiepileptic drugs (AEDs) include benzodiazepines (diazepam and clonazepam), topiramate, and valproic acid. Phenobarbital is effective but poorly tolerated because of its effects on cognition.

Prevention of secondary complications: Use of protective helmets by individuals with atonic seizures or myoclonic-astatic epilepsy.

Agents/circumstances to avoid: AEDs: carbamazepine, lamotrigine, and vigabatrin, which can induce or increase myoclonic seizures; phenytoin, which can induce choreoathetosis. Activities in which a sudden loss of consciousness could lead to injury or death (e.g., bathing, swimming, driving, or working/playing at heights).

Other: The AEDs clobazam and stiripentol, used in the treatment of SMEI, are not FDA-approved for this use in the US. Sleep deprivation and illness can exacerbate seizures. Persons with epilepsy should be made aware of motor vehicle driving laws.

What is the prognosis?

Traveler’s Handbook For People with Epilepsy 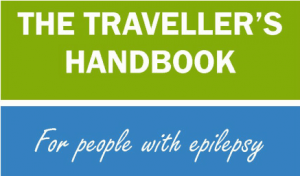 People with epilepsy need to take special precautions when traveling. The Traveller’s Handbook for People with Epilepsy, which has recently been updated, is a very useful booklet for anyone undertaking a trip. It contains general advice for travelers, covering such topics as accommodation, insurance, driving and getting around. It also includes a set of First Aid instructions, reminders regarding medication and a very practical selection of phrases.

What are the options?

Yes, a person with epilepsy can obtain a driver’s license, however, Florida, like every state in the United States, has specific guidelines concerning driver’s licensure for medically impaired individuals including those with epilepsy. Considerable differences exist among the states in length of time a patient must be seizure free in order to drive. In some states, the person must wait two years; in others, only six months.

The procedure is the same for all residents of Florida. Application is made at the local driver license office. A Road Signs and Road Rules examination will be given. When a person indicates on there application that he has had a seizure within the past two years a medical form is mailed to the applicant from Tallahassee. The applicant is responsible for getting this form to his physician. The Physician should completeÂ the form and return it to the Medical ReviewÂ section in Tallahassee. If the applicant passes both the written and the driving portion of the exam and approval is received from the Division of Driver Licenses, then a drivers license will be issued.
Who decides?
The final decision about a person’s medical ability to drive is made by the division of Driver Licenses. The decision, based upon the recommendation of the Department’s Medical Advisory Board, is made after the review of information provided by the physician treating the person with epilepsy.

In Florida, Physicians are not required to report a patient with epilepsy to the Division of Driver Licenses. The moral obligation is left to the patient. It is very important for the person with epilepsy to discuss driving recommendations with his Physician.

If driving privileges are denied, the applicant has a right to appeal. This process consists of a hearing, during which the applicant may present evidence that he is capable of driving and may bring witnesses to testify on his behalf. The request for appeal must be made in writing to the Division of Driver Licenses.

Yes. The Division reviews cases of drivers with seizure disorders at varying periods of time.

Students with epilepsy interested in taking drivers education should contact the local school board office and obtain class requirements before enrolling in the class. In some areas, a restricted license may be required to obtain full credit for the class.

There are federal and state programs that may help with access to education, financial assistance, and home healthcare services. If you don’t qualify for Medicaid or Social Security Disability Insurance (SSDI) benefits, you can apply for a state waiver to get you the support you need.  Each state varies but here are some Federal links below for you.