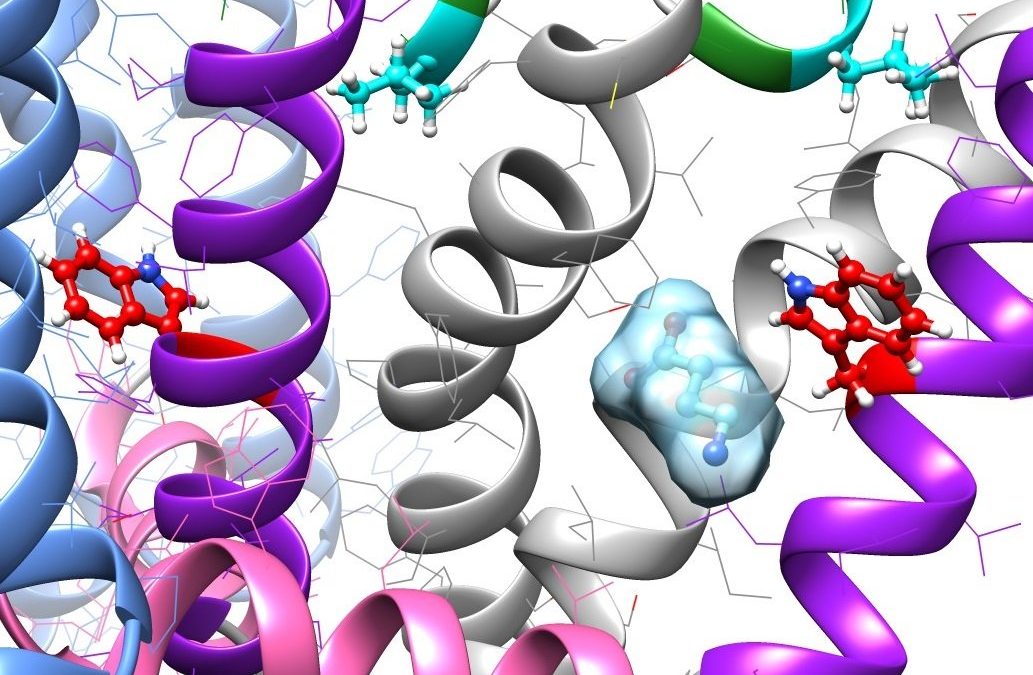 Researchers at the University of California, Irvine School of Medicine have discovered the first example of a novel mode of neurotransmitter-based communication. The discovery, published in Nature Communications, challenges current dogma about mechanisms of signaling in the brain, and uncovers new pathways for developing therapies for disorders like epilepsy, anxiety and chronic pain.

Voltage-gated potassium channels (KCNQ2-5) generate the M-current, which helps control neuronal excitability. Subunits of these channels each have high-affinity anticonvulsant drug-binding pockets, which UCI researchers discovered accommodate endogenous neurotransmitters, including Gamma-aminobutyric acid (GABA), one of the most influential neurotransmitters in the nervous system.

The UCI research team, led by postdoctoral fellow Rían Manville, Ph.D. and principal investigator Geoffrey Abbott, MSc, Ph.D., together with postdoctoral fellow Maria Papanikolaou, MSc, Ph.D., examined an ancient sequence motif, previously identified as a drug-binding site but overlooked with respect to native function. It was there that the team discovered a binding pocket for GABA.

Brain cells communicate by releasing chemicals called neurotransmitters that bind to specific locations, or receptors, on neighboring cells to either promote or prevent excitation, or generation of small electrical currents. Understanding which neurotransmitters bind to which receptors may allow scientists to change the way those cells behave, or to develop drugs that mimic the neurotransmitters… leading to potential new therapies.

“We looked at the anticonvulsant drug-binding site on an ion channel protein (KCNQ3) known for responding to electrical changes in the brain, and asked the question: Why has this binding site been conserved in evolution for more than half a billion years? It could not have evolved to bind modern drugs,” said Geoff Abbott. “Through our study, we discovered that the site evolved to bind, with high sensitivity, certain neurotransmitters, signaling chemicals that occur naturally in the brain.”

The team focused on the chemical properties known to be required for binding of the anticonvulsant action of the drug retigabine. They identified GABA, the primary inhibitory neurotransmitter in metazoan nervous systems, as having similar chemical attributes, and revealed that GABA both tightly binds to, and activates, several channels in the KCNQ gene family.

“This was a complete surprise—KCNQs belong to the “voltage-activated” class of ion channels, a superfamily of channels previously concluded to not be directly activated by neurotransmitters,” said Abbott.

The team pursued mutagenesis studies and a battery of pharmacological controls, further cementing their conclusion that GABA directly modulates specific ion channels in the KCNQ family. GABA activation of M-channels (encoded by KCNQ genes) was found to be direct, independent of the expression system, and occurred with both exogenously and endogenously expressed channels. Significantly, the team found that GABA binding to M-channels was able to hyperpolarize cells, an activity predicted to prevent neuronal firing. This is consistent with GABA’s known role as the primary inhibitory neurotransmitter in the brain, but the discovery opens up an entirely novel and unexpected mechanism for GABA to fulfil its inhibitory role.

“Our findings suggest the potential for an underlying feedback mechanism, as M-channels were previously found to regulate GABA release,” said Abbott. “Additionally, our results demonstrate that certain KCNQ channels have the capacity to act as chemosensors of the extracellular neurotransmitter/metabolite landscape, which could enable M-channels to respond to the balance of these molecules and by doing so regulate cellular excitability over time.”

KCNQ channels are present in both ancient and modern nervous systems and each responds to GABA differently. These channels are already targets for antiepileptic drugs, however, the first of these drugs was recently withdrawn due to unwanted off-target effects. With the identification of direct neurotransmitter activation of these channels, the potential for new epilepsy, anxiety and pain drugs that exploit this alternative chemical space is well within reach.

The team also found that synthetic and naturally occurring metabolites and analogs of GABA, including beta-hydroxybutyrate (BHB), also activate KCNQ channels. They are currently conducting additional studies exploring the role for BHB activation of KCNQ2/3 channels in anticonvulsant effects of the ketogenic diet, given that BHB is the first ketone body produced during fasting or ketogenic diets, and also in diabetic ketoacidosis.