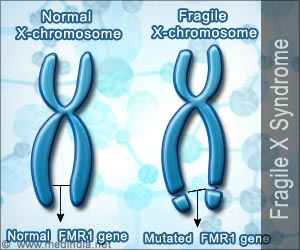 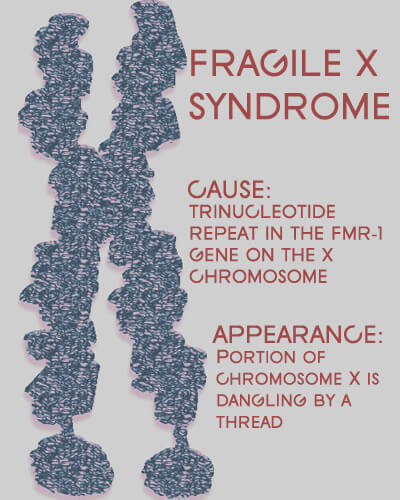 Scientists have gained new insight into fragile X syndrome — the most common cause of inherited intellectual disability — by studying the case of a person without the disorder, but with two of its classic symptoms.

In patients with fragile X, a key gene is completely disabled, eliminating a protein that regulates electrical signals in the brain and causing a host of behavioral, neurological and physical symptoms. This patient, in contrast, had only a single error in this gene and exhibited only two classic traits of fragile X — intellectual disability and seizures — allowing the researchers to parse out a previously unknown role for the gene.

“This individual case has allowed us to separate two independent functions of the fragile X protein in the brain,” said co-senior author Vitaly A. Klyachko, PhD, associate professor of cell biology and physiology at Washington University School of Medicine in St. Louis. “By finding the mutation, even in just one patient, and linking it to a partial set of traits, we have identified a distinct function that this gene is responsible for and that is likely impaired in all people with fragile X.”

The research, appearing in the Proceedings of the National Academy of Sciences (PNAS) Online Early Edition, is by investigators at Washington University and Emory University School of Medicine in Atlanta.

In studying fragile X, researchers’ focus long has been on the problems that occur when brain cells receive signals. Like radio transmitters and receivers, brain cells send and receive transmissions in fine tuned ways that separate the signals from the noise. Until recently, most fragile X research has focused on problems with overly sensitive receivers, those that allow in too much information. The new study suggests that fragile X likely also causes overactive transmitters that send out too much information.

“The mechanisms that researchers have long thought were the entirety of the problem with fragile X are obviously still very much in play,” Klyachko said. “But this unique case has allowed us to see that something else is going on.”

The finding also raises the possibility that drugs recently tested as treatments for fragile X may be ineffective, at least in part, because they only dialed down the brain’s receivers, presumably leaving transmitters on overdrive.

Fragile X syndrome results from an inherited genetic error in a gene called FMR1. The error prevents the manufacture of a protein called FMRP. Loss of FMRP is known to affect how cells in the brain receive signals, dialing up the amount of information allowed in. The gene is on the X chromosome, so the syndrome affects males more often and more severely than females, who may be able to compensate for the genetic error if their second copy of FMR1 is normal.

Patients with fragile X have a range of symptoms. One of the mysteries of the syndrome is how loss of a single gene can lead to such a variety of effects in different patients. Some patients are profoundly intellectually disabled, unable to talk or communicate. Others are only mildly affected. Patients often experience seizures, anxiety and impulsive behavior. Typical physical symptoms include enlarged heads, flat feet and distinctive facial features. Almost one-third of patients with fragile X also show symptoms of autism spectrum disorders.

To gain insight into what else FMRP might do, the researchers plumbed genetic sequencing data from more than 900 males with intellectual disabilities but without classic fragile X syndrome. They looked for mutations in the FMR1 gene that might impair the protein but not eliminate it entirely. Even in this relatively large sample size, they only found one patient with abnormal FMRP, resulting from a change in a single letter of the gene’s DNA code.

Importantly, although this individual has intellectual disability and seizures, his physical features are not typical of the syndrome, and he is not autistic.

To see what effect this mutation might have, geneticist Stephen T. Warren, PhD, and his team at Emory replicated it in mouse brain cells and tested it for the widely known functions of FMRP. To their surprise, this mutated FMRP appeared to work normally. In other words, the patient’s brain cells had entirely normal receivers, which appeared to work in ways that were indistinguishable from those in healthy people.

“This single point mutation does not seem to affect the classical, well-known functions of FMRP,” said Klyachko, also an associate professor of biomedical engineering. “This patient presents a case of partial fragile X syndrome associated with mutated, rather than absent, FMRP. As far as I know, this is the only known case of this. It’s a unique opportunity to parse out the functions of FMRP. What does this mutation impair to cause only two symptoms of fragile X?”

To find out, Warren and his team replicated the mutation in fruit flies.

Surprisingly, according to the researchers, the fruit fly studies indicated that this single mutation increased the number of transmitters in brain cells, implicating a fundamental problem in which the brain’s cells send out too many signals.

To verify this mechanism in mammals, they turned to Klyachko’s lab at Washington University, which has expertise in understanding how brain cells regulate the sending of electrical signals. Indeed, in past work Klyachko showed that total loss of FMRP in mice disrupts the normal process by which brain cells send signals, causing transmitters to send out too much information. In the new study, they were able to verify the same effect from just the mutation and link it to human disease. This single mutation in FMRP has the same overactivating effect on transmissions as the total loss of the protein.

The researchers said they can’t rule out the possibility that additional problems also are caused by this mutation and are present in fragile X. But this research specifies at least one additional dysfunction not previously recognized. Further studies of patients with different partial symptoms of fragile X and different mutations — if any can be found — might identify more.