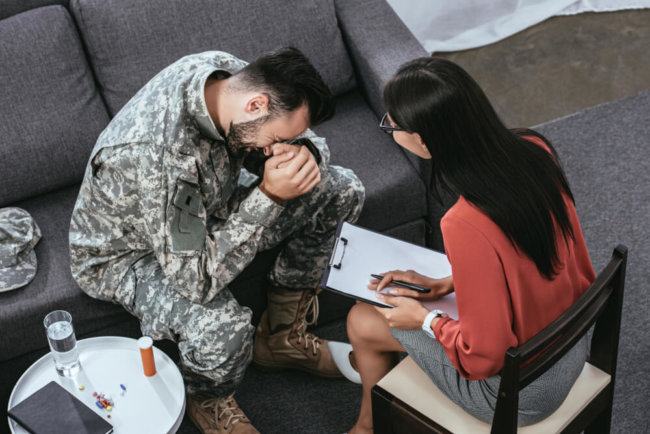 When soldiers go into combat, they put themselves at risk of a traumatic brain injury (TBI), which is caused by a bump, blow or jolt to the head. Explosions experienced during combat or training exercises can cause a soldier’s head to be hit or violently shaken, and can even result in a concussion or closed head injury. Between 2000 and 2020, more than 430,000 U.S. service members were diagnosed with a TBI.

TBI is among the leading causes of injury-related death and disability in the United States, with an estimated 5 million people living with the challenges of a long-term TBI-related disability. With symptoms ranging from “mild” to “severe,” individuals who suffer from TBIs can develop a wide range of long-term consequences such as poor motor balance, depression, post-traumatic stress disorder (PTSD), dementia, epilepsy and premature death.

Spontaneous recurrent seizures (SRS) may occur in the months or years following the injury, which is commonly referred to as post-traumatic epilepsy (PTE). Currently, there is no effective treatment or cure for PTE; therefore, there is a critical need to develop animal models to help further understand and assess the mechanisms and interventions related to TBI-induced epilepsy.

D. Samba Reddy, a professor in the Department of Neuroscience and Experimental Therapeutics at the Texas A&M University College of Medicine, and his team have created a novel experimental model that is able to successfully replicate the same SRS that occur in humans who develop TBI-induced epilepsy. Their findings were recently published in the journal Experimental Neurology. This research, funded by grants from the Department of Defense, can be used to test medical treatments to prevent seizures and other neuropsychiatric conditions in military personnel.

This is a game-changing model on many fronts, Reddy said.

“Without an effective brain injury model, you cannot study the consequences of brain injury,” said Reddy, who is the lead researcher of the project. “This research is so important because it is the first new-generation model of TBI epilepsy. This work has great clinical and military significance for identifying and advancing therapies for brain injury.”

PTE research involves a complex set of operations. In order to effectively study treatment options for PTE, it is critical for the model to accurately and consistently mimic the severity of the brain injury and the spontaneity of a seizure that occurs in humans. Reddy and Victoria Golub, postdoctoral research associate in Reddy’s lab and the first author of the paper, worked on this research project for five years.

“Many previous studies have failed to show reproducible SRS after TBI,” Golub said. “We generated a model that reproduced SRS in a timely manner. We looked at everything as a whole and we tracked it in the same animals for a longer period. To our knowledge, this is the first study to examine PTE at this level.”

The researchers partnered with biomedical engineers to utilize a machine learning approach that conducted automatic analyses of the seizures from an electroencephalography (EEG) database. Through this, the team was able to identify multiple electrographic biomarkers of epileptogenic circuits — meaning that they were able to understand and recognize the behavior and signs of epileptogenesis. In their analyses, they found that high-frequency oscillations and discharges are preceded by seizures, which may serve as biomarkers for predicting seizure risk in the future.

In TBI epilepsies, a brain injury following head trauma can be followed by a latent period called epileptogenesis. During this period, seizures are not occurring, but the brain is undergoing drastic changes that predispose an individual to seizures. In this model, the team was able to show that epileptic seizures occur about 30 days after a TBI incident and are persistent for months. This stage suggests TBI’s disease-modification window for medical treatments.

“Presently, we have no treatment to interrupt the epileptogenic response after TBI,” Reddy said. “The latency period is critical because it represents a therapeutic window to test medical interventions. If such early brain plasticity can be halted by medicines, then this can completely prevent subsequent epilepsy and neuropsychiatric problems following a brain injury.”

In addition to long-term EEG analysis, Reddy’s team profiled a longitudinal change in the brain in two other major areas: brain tissue histology and behavioral patterns. Behaviorally, the test subjects showed sensory and behavioral functional deficits as well as long-term memory dysfunction — too often overlooked facets of the condition in humans that can negatively affect the quality of life and independent functioning.

In neuropathology analysis, the researchers’ findings showed degeneration of principal neurons and a loss of inhibitory interneurons in the brain. Interneurons normally function as a brake to slow electrical activity, so loss of these special neurons causes excess electrical activity in the brain. There was also an increased incidence of mossy fiber sprouting, which is a hallmark cellular change found in temporal lobe epilepsy.

The team looked at multiple points to gain a better understanding of what was happening to the brain over time. In addition, the team conducted the studies in two different brain injury severities — a moderate injury and a severe injury that are common in military settings. This study has uncovered contralateral hippocampus sclerosis as a detrimental hallmark of PTE, which was previously unclear. Such loss of inhibitory interneurons causes an increased incidence of seizures and PTSD-like features.

“By creating neural cascades of epileptogenesis, this model opens avenues for screening strategies that can be used to block epileptogenesis and the development of epilepsy,” Reddy said. “We hope this research will help propel the field towards new medicines and treatment options for individuals suffering from this debilitating condition. We know that brain damage is irreversible, but we hope this model can help reduce or prevent neuropsychiatric comorbidities that occur as a result of TBI, especially in soldiers, athletes and civilians.”