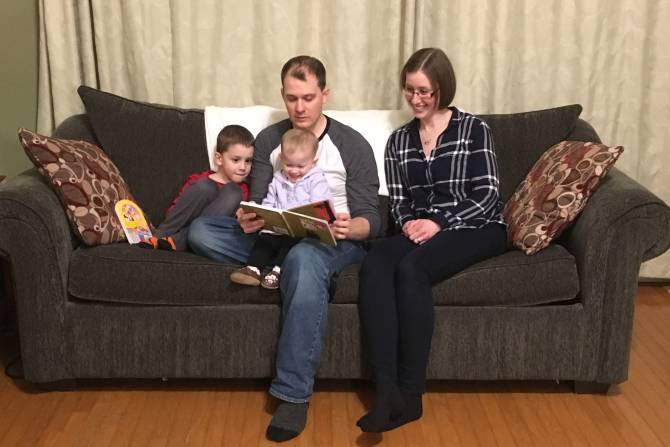 (PNES) Man battling illness that manifests itself through seizures

For Nathan Koops, the middle of 2016 brought on more than his mind could take. His family fled for their lives during the Fort McMurray wildfire in May, only for Nathan to be called back a few days later to fight The Beast.

“Shortly after that, our daughter was born, which was sudden and traumatic,” Nathan said, explaining that his wife had an unplanned C-section and a very difficult delivery.

Then, his son had a severe head injury.

“He was on a deck chair that flipped over backwards and hit a concrete block with his head. There was a lot of blood loss. I feared for his life,” Nathan said.

In June, the father of two started having panic attacks and night terrors.

WATCH VIDEO HERE: A Fort McMurray man is speaking out about the impact trauma can have on the body. He has been diagnosed with a mental health disorder that caused him to have nearly 30 seizures in just 24 hours. Sarah Kraus reports.

His symptoms quickly progressed to include seizures and amnesia. The recent events were just too much to handle.

“This cluster of events basically spilled over,” Nathan said. “My trauma cup was full and wasn’t going to take anymore.”

A doctor diagnosed him with post-traumatic stress disorder. But that didn’t explain the seizures, which were progressively getting worse.
“The frustration is the doctors just say, ‘Oh no, he’s fine. Take him home.’ And he’s having seizures so frequently. He’s in the wheelchair and we’re going out to the van and he’s having a seizure in the wheelchair,” Sarah said.

One day in November 2016, Nathan had 26 episodes, where his left side would constrict and arch.

“I remember a doctor dismissing all the nurses that were trying to make sense of and understand what was happening to me. Dismissing them and saying, ‘This gentleman is just faking these seizures,’” Nathan said.

The couple was frustrated because the tests the doctors were running kept coming back negative. Sarah started researching what could be happening.

One day, she discovered the Northeast Regional Epilepsy Group in New York. A doctor there specialized in the combination of PTSD and another mental illness: psychogenic non-epileptic seizures (PNES).

Despite the high cost of going to the U.S., Sarah felt it was Nathan’s best bet. She started a gofundme page to try and collect donations to make the trip possible. It was hugely successful.

“We’ve got to try something because what we’re doing right now isn’t working,” she said.

She couldn’t stand by and watch his quality of life decline even further.

“You’re watching someone drop to the floor at any time. It’s nerve wracking.”

In one case, Nathan fell off a ladder. In another, he fell down the stairs during a seizure.

“Injuries involved with a lot of them. I shed a lot of blood through these seizures and had a lot of head injuries and bruising,” Nathan said.

“Limitations were set on myself about going out late at night, walking or being out on my own. No more climbing a ladder, obviously there’s no more driving involved.”

In New York, the doctor diagnosed Nathan with PNES using a video EEG, which records brain activity while the patient is filmed.

Then, he underwent prolonged exposure therapy to break down his trauma, including some from his childhood that had gone unresolved for years.

“It was all-encompassing,” Nathan said. “The intake, the neuro-psychological evaluation and then five weeks of therapy that followed.”  The difference has been remarkable.

Since coming home, Nathan has only had a handful of seizures in more than two months. His doctors have also been decreasing his medications.

“My condition has improved greatly,” he said. “It wasn’t a miracle cure, by any means. There was a lot of take-home homework.”

Now, the Koops hope sharing their story will bring more awareness to PNES — something they say is much more common than people realize.
Source:  By Sarah Kraus  © 2018 Global News, a division of Corus Entertainment Inc.