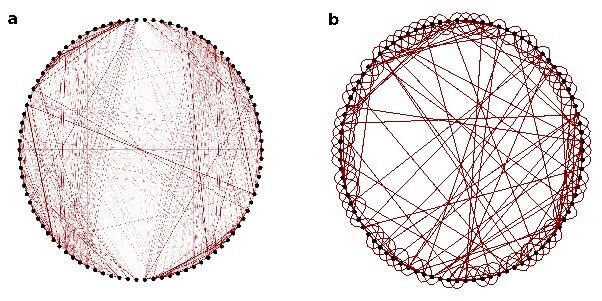 Physicists rewired a simulated human brain: How its rhythms changed and what it means for people with epilepsy

Synchronization is a widespread phenomenon in nature. Examples include fireflies flashing simultaneously, crickets chirping in unison and bird swarms synchronizing their wing flaps. On the day of London’s Millennium Bridge opening, many curious citizens came to cross it. The crowd started to synchronize their walking spontaneously—as a result, the bridge began to sway from side to side. It was closed just a few hours later for safety, and it took two more years of repair until it finally reopened. These examples show that synchronization can either be desirable or harmful.

Photo: Figure 1: Schematic representation of a human brain network. Each black circle represents one of 90 brain areas. The red links indicate the connection strengths. The left (right) semicircle corresponds to the left (right) hemisphere. Note that the coupling within each hemisphere is stronger than that between the two hemispheres. (a) empirical brain network, (b) artificial brain network with clustering coefficient C=0.25 (see discussion below). Credit: Prof. Dr. rer. nat. Dr. h.c. Eckehard Schöll, PhD

Synchronization in the brain

The brain relies on synchronization, too. It is necessary for basic cognitive tasks such as learning and memory. Brain waves can be observed using electroencephalography (EEG), and many neuroscientists focus on investigating these rhythms of the brain. As in the Millennium Bridge example, synchronization of the EEG signals from different parts of the brain may also become excessive. About 1% of all humans suffer from spontaneous attacks of excessive brain synchronization. This disease is known as epilepsy.

The mechanisms behind epileptic seizures are poorly understood. However, it is known that epilepsy can be caused by changes in the brain’s network structure, for example, as a result of a stroke. To better understand the interplay of network structure and network synchronization, we have simulated the oscillation dynamics in a human brain. First, together with our coauthors from neurology, we reconstructed a realistic brain network from magnetic resonance imaging (MRI) [Fig. 1(a)]. That method can be used to track the diffusion of water molecules in human brains, mainly along the axons of the neuronal brain cells, while the subjects are lying in the MRI scanner. Based on this structural network, we simulated the dynamics of the neurons using a simple mathematical model and found occasional spontaneous events of high synchronization. By comparing these simulated seizures with those recorded by EEG in a human subject, we found excellent agreement [Fig. 2].

Computer simulations are increasingly becoming an essential tool in science. Such in silico experiments enable researchers to manipulate biological systems in ways that would be impossible or unethical in living organisms. For example, what would happen to the epileptic brain if we randomly rewired all its connections, destroying its original structure? This is what we tried. It turns out that seizures still occur. However, they differ from real seizures in a characteristic way: They tend to be more frequent but shorter in their duration. Furthermore, the average degree of brain synchronization, even during the healthy state between spontaneous seizures, is much higher than usual: Random network structures increase brain synchronization compared to realistic brain networks.

Such random networks are characterized by a very small number of clusters in the structural network. This is quantified by the so-called global clustering coefficient of the network, which measures the probability of “cliques” in the network: Using the language of social networks, a “clique” is a group of people who are all connected with each other within this clique, i.e., if A has two friends, then these two are also friends with each other. Analogously, a network has a large clustering coefficient if, whenever an element is connected to two other elements (open triplet), then these two are also likely to be connected directly (closed triplet) [Fig. 3]. So in our brain simulations, we observed what happens if we exchange the random network with the other extreme—an artificial network with high clustering. In that case, the brain synchronizes fully: Our entire simulation of the neural activity during three hours is one huge seizure with no healthy brain activity in between. Hence, compared to realistic brain networks, highly clustered networks increase brain synchronization, too.

As shown schematically for a simplified network in the lower panel of Fig. 3, we systematically varied our brain network between these two extremes, changing from artificial highly clustered regular networks to entirely random networks. The brain structure that best resembles real epileptic seizures and real healthy brain activity lies between these two extremes [Fig. 1b]. For this network, the degree of synchronization during the healthy brain states is lower compared to both the highly clustered and the random network. Instead, the degree of synchronization matches that of real brains. In this network, seizures last longer compared to the random network despite lower overall synchronization. However, in general, seizures seldom occur.

Overall, our results show that clustering in the structural brain networks is crucial for enabling healthy brain synchronization while avoiding excessive synchronization. Based on these simulations, it is possible that humans suffering from epilepsy might have brain networks that are closer to one of these two extremes—exhibiting either too-strong or too-weak network clustering. This knowledge could help further improve surgery that aims to change the network structures of epileptic brains purposefully.