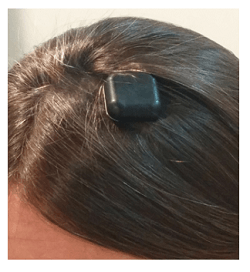 Researchers have developed a wearable electroencephalogram (EEG) device that can detect and record seizure activity in epilepsy patients in the outpatient setting, they reported on Monday at the annual meeting of the American Epilepsy Society in Philadelphia.

The so-called EEG Patch, a small, waterproof, scalp-mounted device, was designed to help patients more accurately track their seizures, Mark Lehmkuhle, PhD, a research assistant professor in neurosurgery at the University of Utah School of Medicine in Salt Lake City, who presented the findings at the meeting, told the Neurology Today Conference Reporter ahead of the session.

The EEG Patch is designed to be fixed to a part of the patient’s scalp where seizures are known to originate based on EEG recorded in-hospital during a traditional epilepsy diagnosis. The device is waterproof and can be worn for up to seven days without needing to be removed or recharged, Dr. Lehmkuhle said.

“There have been quite a few studies to show that seizure diaries can be inaccurate, or in some cases even misleading,” Dr. Lehmkuhle said. “A lot of seizures are non-convulsive or subclinical, and a person may not even know they’re having a seizure. With this device, we’re trying to help people keep track of their seizures better so that they can report them to their epileptologist. The epileptologist would then have a more accurate report of how many seizures a person is having and be able to fine-tune a person’s treatment based on that report.”

The device was manufactured by Epitel Inc., which was founded in 2007 to develop wireless EEG recording technology for research on animal models of epilepsy in the lab of F. Edward Dudek, PhD, a professor of neurosurgery at the University of Utah and a coauthor on the study. It is currently being tested in a small pilot feasibility trial led by Mark C. Spitz, MD, a professor of neurology at the University of Colorado in Denver.

The pilot trial will compare EEG recordings of seizures from the EEG Patch to seizure activity recorded for between three and seven days using wired EEG at the University of Colorado’s epilepsy monitoring unit, Dr. Lehmkuhle said.

Presenting preliminary data in a poster session, Dr. Lehmkuhle said three of four patients had seizures in the EEG monitoring unit, and the waveform recordings from the wired EEG and the EEG Patch looked very similar. “We think we can see the simultaneously recorded seizures in both the wireless and the wired EEG channels,” he said.

Commenting on the study, Robert S. Fisher, MD, PhD, FAAN, the Maslah Saul professor of neurology and director of the Stanford Epilepsy Center at Stanford University Medical Center, said: “There is a major need for new EEG technology that can be used long-term in the outpatient environment. Having a low-profile way of recording EEG long-term would help us with diagnosis of seizures and counting numbers of seizures, and eventually it might, as technology improves, even help us with seizure prediction.”

The device “appears to be potentially very good at counting seizures where you know the location of the seizure a priori,” he added. However, “it might not be quite as applicable to making a diagnosis of epileptic versus non-epileptic events, because in that setting you wouldn’t really know where to put the one electrode.”

Dr. Fisher disclosed that he holds stock options in two companies that develop EEG equipment, Advanced Neurometrics Inc. and Zeto Inc. Neither company was involved in the development of the EEG Patch.

LINK UP FOR MORE INFORMATION: