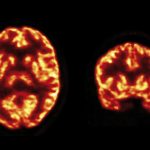 A new imaging technique allows researchers to illuminate the junctions between neurons in a living person’s brain1. The method may reveal shifts in the distribution or number of these connections, called synapses, in individuals with epilepsy and other brain conditions.

Previously, scientists could only inspect synapses in postmortem brains or brain tissue removed during surgery. But spotting these junctions in live individuals could enable scientists to monitor changes that accompany the progression or treatment of certain brain conditions.

To visualize synapses, the researchers developed a novel radioactive tracer that tags a protein called synaptic vesicle glycoprotein 2A found at the junctions. This protein lines the sacs that release chemical messengers into synapses.

The researchers used positron emission tomography (PET) to detect where the tracer binds and emits a radioactive signal. Areas with stronger PET signals have greater numbers of tagged proteins and thus more synapses than do areas with weak signals. The findings appeared 20 July in Science Translational Medicine.

To check the tracer’s specificity, the researchers used a drug that latches onto the same protein. As expected, the drug displaces the bound tracer.

When they gave the tracer to three people with epilepsy, the researchers found an unusually weak signal on the side of the brain in which their seizures originate.

The weakest signals come from the hippocampus (the brain’s memory hub) and the amygdala, an emotion center — two regions that commonly show synapse loss in epilepsy. In people with no known brain condition, the signal strength is similar on both sides of the brain.

The new approach could help researchers track changes in synapses that may accompany epilepsy or brain conditions such as schizophrenia and Alzheimer’s disease. It might also help scientists spot excess synapses in individuals with autism.