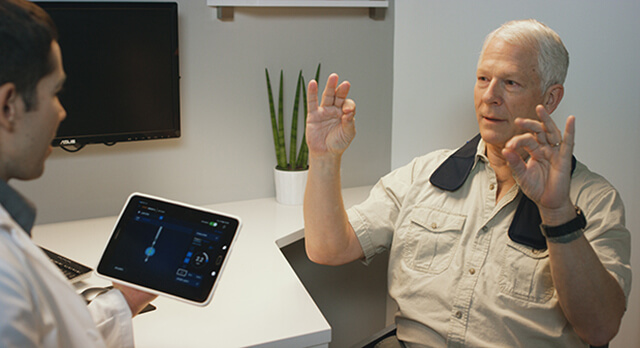 Beginning Monday, patients with epilepsy will have a new option to reduce the number and severity of life-limiting seizures, avoiding radical surgery that removes a part of the brain.

Called deep-brain stimulation, the treatment uses electrodes implanted in the thalamus, a structure located near the center of the brain that receives information from the senses and sends signals to the cerebral cortex.

The electrodes are controlled by a device implanted in the chest, similar to a pacemaker, and patients have a remote-control device that can adjust the amount of stimulation or even turn it off for periods of time.
“It can have a very significant impact on the ability to live on their own, take a job, all the things that many of us take for granted,” said Dr. Jason Gerrard, director of stereotactic and functional neurosurgery at the Yale School of Medicine. Gerrard also is affiliated with the Yale Comprehensive Epilepsy Center at Yale New Haven Hospital, begun by Dr. Dennis Spencer, now chief of epilepsy surgery, 50 years ago.

“What we’re doing is attempting to change the activity of neurons in the brain through chronic neurostimulation,” Gerrard said.

Solomon Yi, a therapy representative for Medtronic, which is based in Minneapolis, said Yale New Haven Hospital, a Level 4 epilepsy center, is one of 30 “centers of excellence” that were chosen to begin using the neurostimulator for epilepsy. He said the system was “first approved for essential tremor, which was an action tremor, in 1997, Parkinson’s in 2002, then this year for epilepsy.”

The technique of implanting electrodes in the brain has been used for disorders including action tremors (which occur during bodily movement), Parkinson’s disease, dystonia (involuntary muscle contractions) and obsessive-compulsive disorder. But the Food and Drug Administration only approved the technique for epilepsy in April.

There are 2.2 million to 3 million epilepsy patients in the United States, according to the American Epilepsy Society, with one in 26 people suffering epileptic seizures during their lifetime. There are medications for the disorder, which the Epilepsy Foundation says control seizures in 70 percent of patients.

When the disorder is resistant to medication, it is known as refractory epilepsy, Gerrard said, but most people will try up to six or seven medications before they’ll even consider surgery because it is so invasive.

“Historically, we would attempt to localize the onset of the seizures and evaluate the patient to see if that part of the brain can be removed, and in some cases it can be,” Gerrard said. In others, the source of the epileptic seizures is “either difficult to nail down or starts in a part of the brain that cannot be removed,” he said.

Traditional surgery has been recommended once two medications have failed to help a patient, but “in reality, people are more willing to try that sixth, seventh, eighth medication rather than going for surgery,” Gerrard said. “I think that’s human nature.”

The younger a person is when they undergo surgery the better, but “right now our average patient who finally comes for surgical treatment is probably in their late 30s, early 40s,” Gerrard said.

The most common surgery, which Gerrard said has a 60 percent cure rate, is an anterior medial temporal lobectomy, which removes parts of the amygdala and hippocampus and can affect memory and cognition. In trials comparing surgery with multiple medications, the surgery was shown “to be far superior,” he said.

“We haven’t made any progress in getting people to consider surgery earlier in their treatment course,” he said. “We’re hoping … having a less invasive surgical option will help break down those barriers in having those patients consider surgery.”

Deep-brain stimulation is much less aggressive than traditional surgery. The neurostimulator device is implanted in the chest and two leads are brought under the skin to the top of the head, with one being inserted into each thalamus on either side of the brain. Each lead has four contacts. “You can stimulate any or all of them in any combination,” Gerrard said.

In the thalamus, there are clusters of neurons that control communication of sensory stimuli to other parts of the brain. The part of the thalamus that the electrodes target “is well connected to what is called the limbic system, which is one of the major networks that is involved in epilepsy, and so the idea is to modulate that whole system and reduce the seizures,” Gerrard said. The limbic system is involved in the emotions, memory and basic drives such as hunger.

While deep-brain stimulation has been used for other neurological disorders, “the process of going through FDA trials to get approval for the therapy takes many years,” he said. A major study, Stimulation of the Anterior Nucleus of the Thalamus for Epilepsy, sponsored by Medtronic, developer of the neurostimulation device, was registered in January 2005 and results were first reported in March 2010. The subjects were “all patients who continued to have seizures despite multiple medications,” with a minimum of two seizures per month, Gerrard said. “Some patients have many more than that.”

“The outcomes … were pretty good, not as great as everybody had hoped,” and the device was approved in Europe but not in the United States. However, “they followed those patients over time and showed that the efficacy improved,” Gerrard said. After five years, up to 65 percent of patients responded to the stimulation. “With the long-term data they went back to the FDA … and got approval” in 2015.

The stimulator comes in two models, one operated by a lithium ion battery that must be replaced every three to five years and another that is rechargeable and lasts up to 12 years. The patient holds a recharging device to the chest to keep the stimulator going.

After the stimulator is implanted, programming it is done over time, with “adjustments made depending on any potential side effects patients are having” and how well it is working to reduce the number and severity of seizures. Each patient is given a programmer “that allows them to interact with the device,” Gerrard said. “It’s kind of like a parental programmer for the television. In some patients, as they become more familiar with the device and their stimulator … they may change their programs at home.”

In some patients, for example, reducing the number of seizures has the side effect of lowering the volume of their voice, so they may turn the device off during a family function so they can be heard, Gerrard said. It also needs to be turned off during an electrocardiogram, MRI and some dental procedures.

While the reduction in the number of seizures can be measured, whether their intensity is reduced is “more difficult to quantify,” Gerrard said. “Most people who are having seizures can’t tell you much about their seizures.”

He said “the majority of experts would agree that there is ongoing damage to the brain networks in people who are having seizures” and there is hope that reducing seizures through neurostimulation “can actually improve their cognitive functions.”

While there haven’t been many side effects found, “there is some work looking at whether the stimulator can affect the patient’s mood,” either heightening or lowering it, Gerrard said. “It seems to be more of a slow, long-term effect,” he said. “Not necessarily surprisingly, the fact that the brain networks that are involved in epilepsy” overlap with the networks “involved in neuropsychiatric disorders,” such as depression, anxiety and obsessive-compulsive disorder.

“If you look at patients with epilepsy, the existence of depression, anxiety in the patient population is more than 50 percent,” he said.

The surgery to implant the neurostimulator and its electrodes is conducted “in the MRI scanner so we can actually see the target we’re trying to hit and in real time see the electrodes go to that target,” he said.