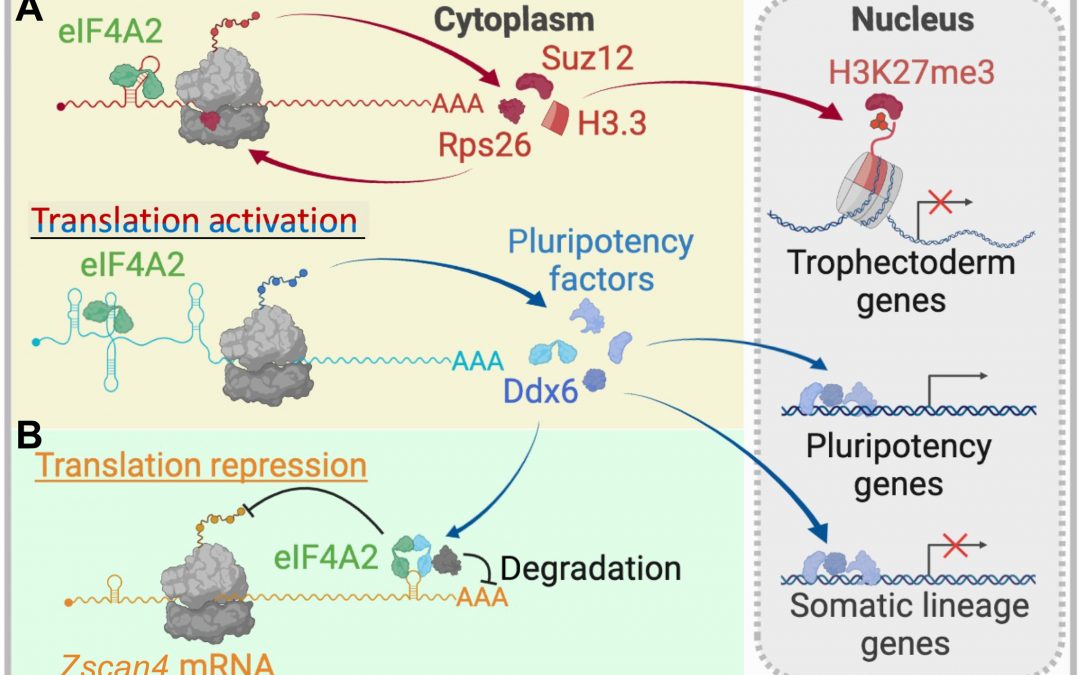 Neurodevelopmental disorders (NDD) encompass highly prevalent conditions such as autism and epilepsy, with cognitive disabilities alone affecting 1-3% of the global population. Developmental epileptic encephalopathies (DEE) are NDD characterized by epilepsy and delayed development or loss of developmental skills. Although the prevalence of DEEs remains to be determined, studies estimate that single-gene epilepsies occur in around 1 in 2100 births annually. A recent study from the laboratories of Dr. Hsiao-Tuan Chao, assistant professor at Baylor College of Medicine (BCM) and investigator at the Jan and Dan Duncan Neurological Research Institute (Duncan NRI) at Texas Children’s Hospital, and Dr. Pankaj Agrawal, professor at Harvard Medical School and Boston Children’s Hospital, identified alterations in the Eukaryotic Initiation Factor 4A2 (EIF4A2) gene as the cause of a novel DEE syndrome.

This new discovery, published in the American Journal of Human Genetics, provides the first experimental demonstration of a causative role of alterations impacting EIF4A2 in human disease.

The study involved an international collaboration that was made possible by a virtual tool called MatchMaker Exchange, which was launched in 2013 to serve as an integrated platform for clinicians and researchers all over the world to exchange phenotypic and genotypic data which greatly accelerates genomic discovery.

“Using this tool, Dr. Anna Duncan, an instructor in Dr. Agrawal’s lab and co-first author of the study, identified about 15 individuals from 14 families who had structural changes in the brain (as observed by MRI imaging) and similar clinical presentations comprising global developmental delays, poor muscle tone, speech impairments, and epilepsy,” Chao said. “They found these individuals carried extremely rare spontaneous mutations in one or both copies of EIF4A2.”

The EIF4A2 gene encodes an ATP-dependent RNA helicase, a protein that is involved in regulating the three-dimensional (3D) structure of a fundamental molecule, the ribonucleic acid (RNA). The EIF4A2 protein is expressed in all tissues and acts as a regulator of protein translation. It belongs to the DEAD-box family – a group of 50 closely-related proteins – many of which regulate protein translation, a fundamental molecular process by which messenger RNAs are converted to their corresponding proteins. Previous studies have implicated EIF4A2 as critical in brain development and its dysfunction has been associated with intellectual disability.

To confirm if these gene variants are responsible for the neurological symptoms seen in these patients, co-first author, Dr. Maimuna Sali Paul, a postdoctoral fellow in the Chao lab, and Dr. Chao carefully examined human EIF4A2 variants and its fruit fly counterpart, elF4A, with which it shares significant sequence similarity.

They identified four variants of EIF4A2 that affected conserved residues in the fly gene eIF4A and were predicted by molecular modeling data to perturb the 3D structure of the human EIF4A and its interaction with the RNA. Dr. Paul found overexpression of these EIF4A2 variants in the fruit fly resulted in a variety of behavioral and developmental defects such as motor defects, and improper development of eyes, wings, and peripheral nervous system organs such as bristles, a clear indication of their toxicity.

Moreover, Dr. Paul leveraged the knowledge that complete loss of eIF4A was lethal at the fruit fly embryonic stages, whereas reducing its levels from specific tissues was lethal in either embryonic or pupal stages, to study the functional consequences of the human EIF4A2 variants. “Most importantly, when we overexpressed the wild-type human EIF4A in the eyes of the flies lacking this gene, we were able to completely ‘rescue’ the pupal lethality and restore the normal lifespan of these flies,” Dr. Paul said. “However, overexpression of one disease-causing variant resulted in a weak/partial rescue while the others were unable to rescue the lethality – a clear indication of the essential role they play during development.”

“Consistent with this study, our lab had previously found that loss of a kinase, EIF2AK2 which regulates downstream protein complexes involved in protein translation also causes similar neurological impairments,” Dr. Chao said. “Thus, our findings in this study underscore the critical role of balanced regulation of protein translation for brain development and maintenance of function in neurons and glia. These findings reveal EIF4A2 as a previously unrecognized cause of a novel developmental epilepsy syndrome.”