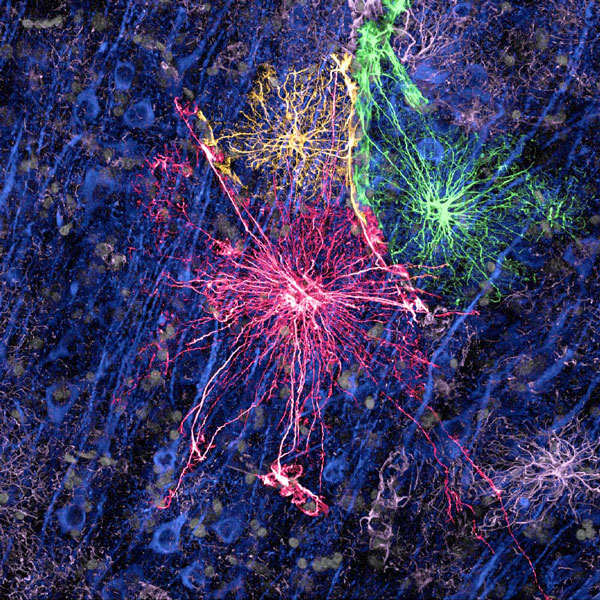 Devin K. Binder, an associate professor of biomedical sciences in the School of Medicine at the University of California, Riverside, and Jacqueline A. Hubbard, a recent UC Riverside alumna, have coauthored a book, “Astrocytes and Epilepsy” (Academic Press, Elsevier, 2016), that provides a comprehensive overview of astrocyte biology, the role astrocytes play in epileptic brain tissue, and their potential as a therapeutic target.

Present throughout human history, epilepsy is a devastating group of neurological disorders characterized by periodic and unpredictable seizure activity in the brain. Periods of unusual behavior and sensations as well as loss of consciousness are also possible. Astrocytes – expansive star-shaped glial cells found in the brain – may represent an important new therapeutic target in the control of epilepsy. For the first time in book format, “Astrocytes and Epilepsy” reviews findings linking changes in astrocytes to functional changes responsible for epilepsy.

“The advances in research in astrocyte biology and astrocyte-neuron interactions over the past few years have identified entirely new ways to think about the development of seizures and epilepsy,” Binder said. “In this book we review the changes that occur in astrocyte networks in epilepsy and propose novel therapeutic targets for the control of epilepsy with fewer side effects than conventional antiepileptic drug therapies. Discovery of the role of astrocytes in epilepsy is the most exciting recent research development in this field which makes this an especially good time to review this field in monograph format.”

The book’s intended audience is comprised of advanced graduate students, neuroscientists, epilepsy researchers, astrocyte investigators as well as neurologists and other specialists caring for patients with epilepsy.

Chapters include a history of astrocytes, astrocytes in the mammalian brain, types of epilepsy, neuropathology of human epilepsy, blood-brain barrier disruption, and inflammation. “Astrocytes and Epilepsy” is the first comprehensive book to synthesize historical and recent research on astrocytes and epilepsy into one coherent volume.

Binder attended Harvard University as an undergraduate, where he studied biology, anthropology, and neuroscience. Deciding to pursue both neuroscience and clinical medicine, he enrolled in the M.D./Ph.D. program at Duke University. At Duke, he graduated first in his medical school class. Subsequently, he completed a one-year internship in general surgery at UC San Francisco, and a six-year residency in neurological surgery at UCSF.

Following residency, he was awarded a one-year fellowship in neuroscience and neurosurgery at the University of Bonn. There, he did another fellowship at the Institute for Cellular Neuroscience. Following a three-year stint at UC Irvine, Binder joined UCR in 2010, where he runs the Translational Neuroscience Laboratory, and conducts research on astrocytes, epilepsy, and neurophotonics. A member of the Center for Glial-Neuronal Interactions on campus, he has been publishing in the epilepsy field since the 1990s, and has publications since 2004 relevant to astrocyte contribution to seizures and epilepsy.

As a graduate student, coauthor Hubbard worked closely with Binder on research focusing on characterizing astrocytic changes in epilepsy. She received her M.S. in biochemistry and molecular biology from UCR in 2012. She graduated with a Ph.D. in biochemistry and molecular biology this summer, and is pursuing a year of further postdoctoral study and training in Binder’s laboratory.

“This book details why epilepsy is no longer considered simply a neuronal disease, but instead, is a complex group of disorders involving several different cell types and structures in the brain,” Hubbard said. “It provides readers with a well-organized, comprehensive review of astrocyte biology, the myriad of epilepsy syndromes, and the functional roles that astrocytes play in the development and maintenance of epilepsy. We hope that readers will gain a complete understanding of the numerous changes currently known to occur in the epileptic brain.”