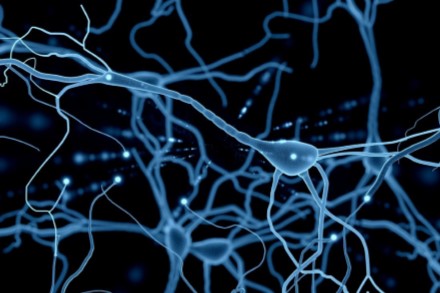 Neurons are responsible for carrying information throughout the human body. Using electrical and chemical signals, they help coordinate all of the necessary functions of life. In this article, we explain what neurons are and how they work.

In short, our nervous systems detect what is going on around us and inside of us; they decide how we should act, alter the state of internal organs (heart rate changes, for instance), and allows us to think about and remember what is going on. To do this, it relies on a sophisticated network — neurons.

It has been estimated that there are around 86 billion neurons in the brain; each one is connected to another 1,000 neurons. This creates an incredibly complex network of communication. Neurons are considered the basic units of the nervous system.

Neurons, sometimes called nerve cells, make up around 10 percent of the brain; the rest consists of glial cells and astrocytes that support and nourish neurons. 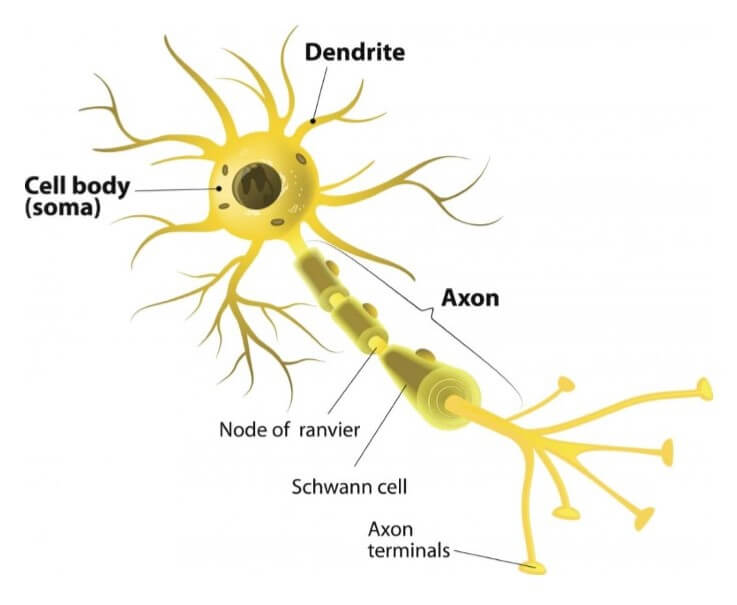 Soma (cell body) — this portion of the neuron receives information. It contains the cell’s nucleus.
Dendrites — these thin filaments carry information from other neurons to the soma. They are the “input” part of the cell.
Axon — this long projection carries information from the soma and sends it off to other cells. This is the “output” part of the cell. It normally ends with a number of synapses connecting to the dendrites of other neurons.

Both dendrites and axons are sometimes referred to as nerve fibers.

Axons vary in length a great deal. Some can be tiny, whereas others can be over 1 meter long. The longest axon is called the dorsal root ganglion (DRG), a cluster of nerve cell bodies that carries information from the skin to the brain. Some of the axons in the DRG travel from the toes to the brain stem — up to 2 meters in a tall person.

Neurons can be split into types in different ways, for instance, by connection or function.

Efferent neurons — these take messages from the central nervous system (brain and spinal cord) and deliver them to cells in other parts of the body.

Afferent neurons — take messages from the rest of the body and deliver them to the central nervous system (CNS).

Interneurons — these relay messages between neurons in the CNS.

How do neurons carry a message?

If a neuron receives a large number of inputs from other neurons, these signals add up until they exceed a particular threshold.

Once this threshold is exceeded, the neuron is triggered to send an impulse along its axon — this is called an action potential.

An action potential is created by the movement of electrically charged atoms (ions) across the axon’s membrane.

Neurons at rest are more negatively charged than the fluid that surrounds them; this is referred to as the membrane potential. It is usually -70 millivolts (mV).

When the cell body of a nerve receives enough signals to trigger it to fire, a portion of the axon nearest the cell body depolarizes — the membrane potential quickly rises and then falls (in about 1,000th of a second). This change triggers depolarization in the section of the axon next to it, and so on, until the rise and fall in charge has passed along the entire length of the axon.
After each section has fired, it enters a brief state of hyperpolarization, where its threshold is lowered, meaning it is less likely to be triggered again immediately.

Most often, it is potassium (K+) and sodium (Na+) ions that generate the action potential. Ions move in and out of the axons through voltage-gated ion channels and pumps.

This is the process in brief:

Na+ channels open allowing Na+ to flood into the cell, making it more positive.
Once the cell reaches a certain charge, K+ channels open, allowing K+ to flow out of the cell.

As the membrane potential returns to its resting state, the K+ channels shut.
Finally, the sodium/potassium pump transports Na+ out of the cell and K+ back into the cell ready for the next action potential.

Action potentials are described as “all or nothing” because they are always the same size. The strength of a stimulus is transmitted using frequency. For instance, if a stimulus is weak, the neuron will fire less often, and for a strong signal, it will fire more frequently. 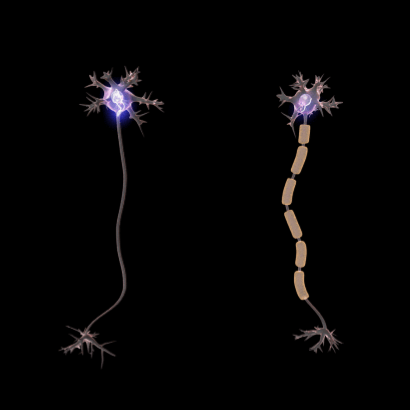 Most axons are covered by a white, waxy substance called myelin.
This coating insulates nerves and increases the speed at which impulses travel.

Myelin is created by Schwann cells in the peripheral nervous system and oligodendrocytes in the CNS.

There are small gaps in the myelin coating, called nodes of Ranvier. The action potential jumps from gap to gap, allowing the signal to move much quicker.

Multiple sclerosis is caused by the slow breakdown of myelin.

Neurons are connected to each other and tissues so that they can communicate messages; however, they do not physically touch — there is always a gap between cells, called a synapse. 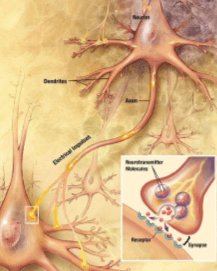 Once a signal reaches a synapse, it triggers the release of chemicals (neurotransmitters) into the gap between the two neurons; this gap is called the synaptic cleft.

The neurotransmitter diffuses across the synaptic cleft and interacts with receptors on the membrane of the postsynaptic neuron, triggering a response.
Chemical synapses are classified depending on the neurotransmitters they release:

Glutamergic — releases glutamine. They are often excitatory, meaning that they are more likely to trigger an action potential.

GABAergic — release GABA (gamma-Aminobutyric acid). They are often inhibitory, meaning that they reduce the chance that the postsynaptic neuron will fire.

Cholinergic — release acetylcholine. These are found between motor neurons and muscle fibers (the neuromuscular junction).

Electrical synapses work much faster than chemical synapses, so they are found in places where quick actions are necessary, for instance in defensive reflexes.

Neurons are one of the most fascinating types of cell in the human body. They are essential for every action that our body and brain carry out. It is the complexity of neuronal networks that gives us our personalities and our consciousness. They are responsible for the most basic of actions, and the most intricate. From automatic reflex actions to deep thoughts about the universe, neurons cover it all.