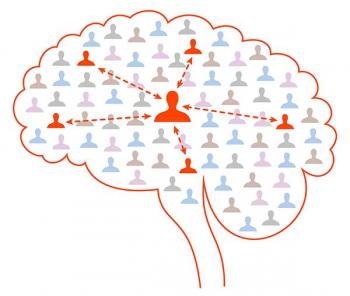 Neurons in the brain are wired like a social network, report researchers from Biozentrum, University of Basel. Each nerve cell has links with many others, but the strongest bonds form between the few cells most similar to each other. The results are published in the journal  Nature.

A neural network is like a social network: The strongest bonds exist between like-minded partners.
Credit: Biozentrum, University of Basel

Nerve cells form a bewildering meshwork of connections called synapses – up to several thousand per cell. Yet not all synaptic connections are equal. The overwhelming majority of connections are weak, and cells make only very few strong links. “We wanted to see if there are rules that explain how neurons connect in complex networks comprising millions of neurons,” says Professor Thomas Mrsic-Flogel, the leader of the research team from the Biozentrum (University of Basel) and UCL (University College London). “It turns out that one of the rules is quite simple. Like-minded neurons are strongly coupled, while neurons that behave very differently from each other connect weakly or not at all.”

The researchers focused on the visual area of the cerebral cortex, which receives information from the eye and gives rise to visual perception. Neurons in this part of the brain respond to particular visual patterns, but it is difficult to untangle which cells are synaptically connected because there are many thousands of them densely packed (close to 100.000 per cubic millimeter).

Using a combination of high resolution imaging and sensitive electrical measurements, the researchers found that connections between nearby neurons are organized like a social network. Sites like Facebook keep us in contact with large numbers of acquaintances, but most people have a much smaller circle of close friends. These are usually the friends with which we have most in common, and their opinions can be more important to us than the views of the rest.

“Weak contacts in the brain have little impact, despite being in the majority,” says Mrsic-Flogel. “The few strong connections from neurons with similar functions exert the strongest influence on the activity of their partners. This could help them work together to amplify specific information from the outside world.”

Weak connections could be important for learning

But why do neurons share such large numbers of weak connections? “We think this might have to do with learning,” says Dr Lee Cossell, one of the lead authors of the study. “If neurons need to change their behavior, weak connections are already in place to be strengthened, perhaps ensuring rapid plasticity in the brain.” As a result, the brain could quickly adapt to changes in the environment.

This research is part of worldwide effort to shed light on how the brain generates perceptions, thoughts and actions by mapping the brain’s wiring diagram. “It reveals how networks of neurons interact together to process information. Understanding how neurons connect will pave the way for building detailed computer simulations of the brain,” says Mrsic-Flogel. Research that explores how neurons connect will also be important for understanding neurological diseases. “If we know what the pattern of connections in the brain should look like, then we can start to figure out what happens when things go wrong, for example, in schizophrenia or autism,” adds Mrsic-Flogel.