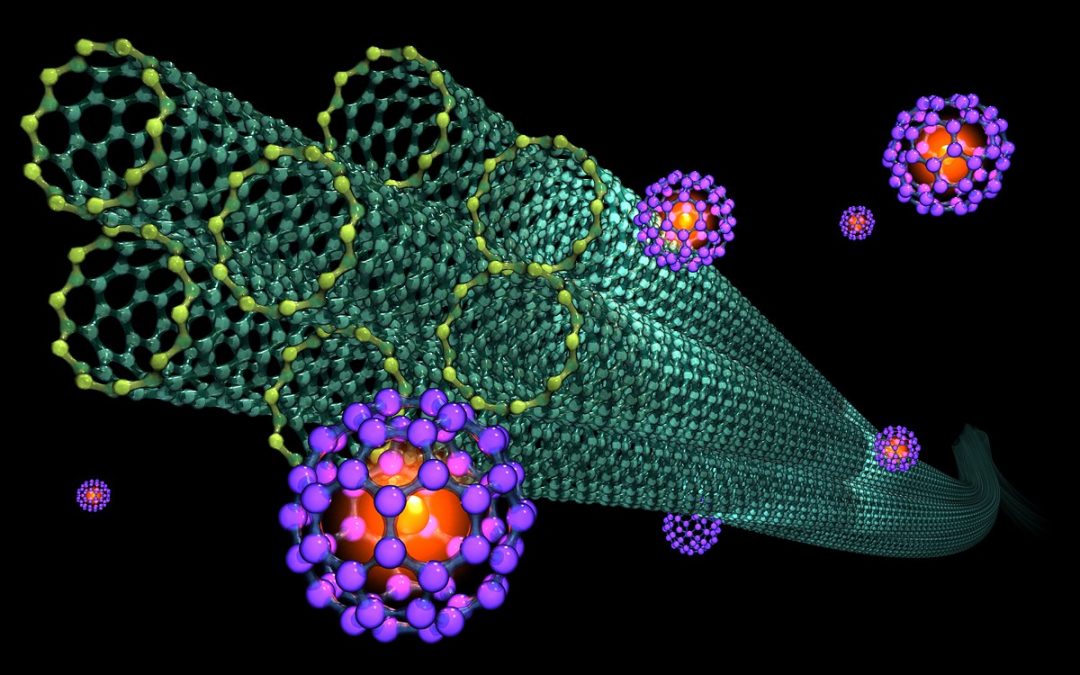 Nanotubes go with the flow to penetrate brain tissue

Rice University researchers have invented a device that uses fast-moving fluids to insert flexible, conductive carbon nanotube fibers into the brain, where they can help record the actions of neurons.

The Rice team’s microfluidics-based technique promises to improve therapies that rely on electrodes to sense neuronal signals and trigger actions in patients with epilepsy and other conditions.

Eventually, the researchers said, nanotube-based electrodes could help scientists discover the mechanisms behind cognitive processes and create direct interfaces to the brain that will allow patients to see, to hear or to control artificial limbs.

The device uses the force applied by fast-moving fluids that gently advance insulated flexible fibers into brain tissue without buckling. This delivery method could replace hard shuttles or stiff, biodegradable sheaths used now to deliver wires into the brain. Both can damage sensitive tissue along the way. 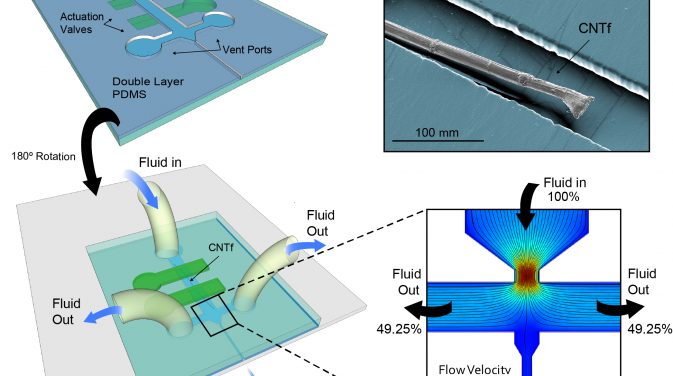 The technology is the subject of a paper in the American Chemical Society journal Nano Letters.

Lab and in vivo experiments showed how the microfluidic devices force a viscous fluid to flow around a thin fiber electrode. The fast-moving fluid slowly pulls the fiber forward through a small aperture that leads to the tissue. Once it crosses into the tissue, tests showed the wire, though highly flexible, stays straight.

“The electrode is like a cooked noodle that you’re trying to put into a bowl of Jell-O,” said Rice engineer Jacob Robinson, one of three project leaders. “By itself, it doesn’t work. But if you put that noodle under running water, the water pulls the noodle straight.”

The wire moves slowly relative to the speed of the fluid. “The important thing is we’re not pushing on the end of the wire or at an individual location,” said co-author Caleb Kemere, a Rice electrical and computer engineer who specializes in neuroscience. “We’re pulling along the whole cross-section of the electrode and the force is completely distributed.”

“It’s easier to pull things that are flexible than it is to push them,” Robinson said.

“That’s why trains are pulled, not pushed,” said chemist Matteo Pasquali, a co-author. “That’s why you want to put the cart behind the horse.”

The fiber moves through an aperture about three times its size but still small enough to let very little of the fluid through. Robinson said none of the fluid follows the wire into brain tissue (or, in experiments, the agarose gel that served as a brain stand-in).

There’s a small gap between the device and the tissue, Robinson said. The small length of fiber in the gap stays on course like a whisker that remains stiff before it grows into a strand of hair. “We use this very short, unsupported length to allow us to penetrate into the brain and use the fluid flow on the back end to keep the electrode stiff as we move it down into the tissue,” he said.

“Once the wire is in the tissue, it’s in an elastic matrix, supported all around by the gel material,” said Pasquali, a carbon nanotube fiber pioneer whose lab made a custom fiber for the project. “It’s supported laterally, so the wire can’t easily buckle.”

Carbon nanotube fibers conduct electrons in every direction, but to communicate with neurons, they can be conductive at the tip only, Kemere said. “We take insulation for granted. But coating a nanotube thread with something that will maintain its integrity and block ions from coming in along the side is nontrivial,” he said.

Sushma Sri Pamulapati, a graduate student in Pasquali’s lab, developed a method to coat a carbon nanotube fiber and still keep it between 15 to 30 microns wide, well below the width of a human hair. “Once we knew the size of the fiber, we fabricated the device to match it,” Robinson said. “It turned out we could make the exit channel two or three times the diameter of the electrode without having a lot of fluid come through.”

The researchers said their technology may eventually be scaled to deliver into the brain at once multiple microelectrodes that are closely packed; this would make it safer and easier to embed implants. “Because we’re creating less damage during the implantation process, we might be able to put more electrodes into a particular region than with other approaches,” Robinson said.

Flavia Vitale, a Rice alumna and now a research instructor at the University of Pennsylvania, and Daniel Vercosa, a Rice graduate student, are lead authors of the paper. Co-authors are postdoctoral fellow Alexander Rodriguez, graduate students Eric Lewis, Stephen Yan and Krishna Badhiwala and alumnus Mohammed Adnan of Rice; postdoctoral researcher Frederik Seibt and Michael Beierlein, an associate professor of neurobiology and anatomy at McGovern Medical School at the University of Texas Health Science Center at Houston; and Gianni Royer-Carfagni, a professor of structural mechanics at the University of Parma, Italy.