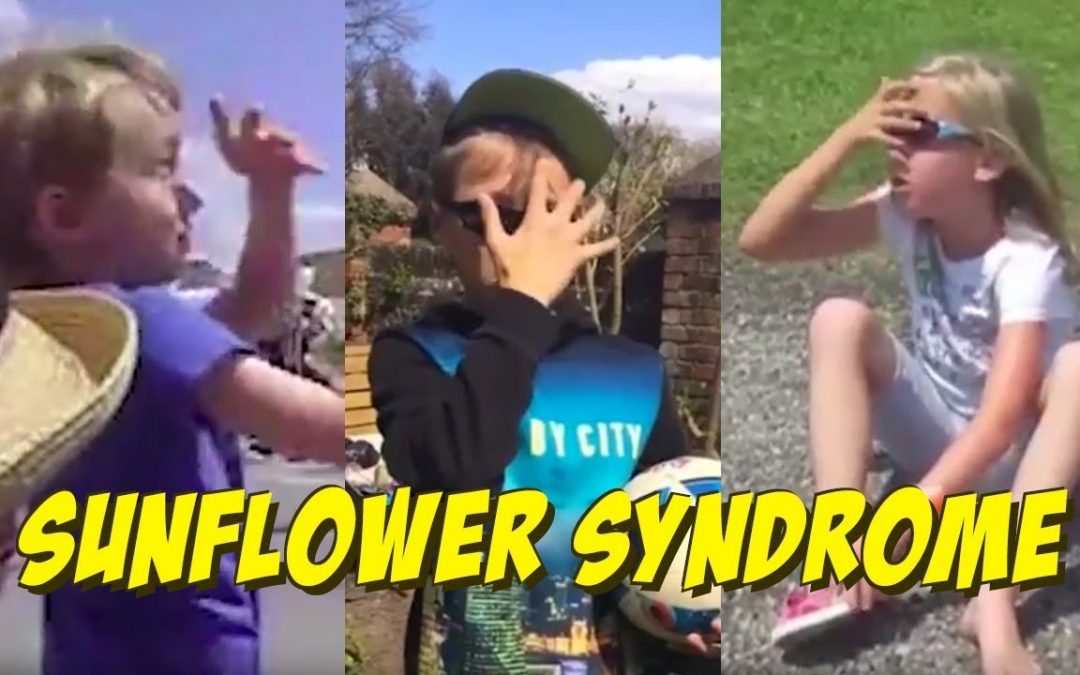 Emma Paven had never met anyone with the mysterious syndrome she has lived with since she was 9 years old.

Then a few months ago, while walking by a first-grade classroom in the school where she’s a teacher’s aide, the 19-year-old Hingham resident saw a little girl on her knees, staring at the bright LED lights above her. She was rapidly waving her hand back and forth in front of her face, as if repeatedly brushing hair out of her eyes.

“My heart dropped to my stomach,” Paven said. It was as if she were looking at a younger version of herself.

“I have felt so alone in this for so many years,” she said. “I never saw anyone else do it.”

What Paven and the youngster share is Sunflower syndrome, a rare form of epilepsy that, in a new study, researchers at Massachusetts General Hospital are working to understand — and treat.

Get Metro Headlines in your inboxThe 10 top local news stories from metro Boston and around New England delivered daily.Sign Up

Sunflower syndrome compels those who suffer from it to turn toward bright light and wave one hand, fingers spread, in front of their eyes. It’s usually the same hand every time. This unique behavior is coupled with abrupt lapses in consciousness that last several seconds.

“About half of the kids do it both indoors and outdoors. It’s pretty crippling,” said Dr. Elizabeth Thiele, director of the pediatric epilepsy program at MassGeneral Hospital for Children. She has fielded calls from Sunflower patients around the world and seen dozens of them, including a 7-year-old boy who obsessively drew pictures of the sun.

The disorder — which typically strikes girls, usually when they are under age 10 — can trigger hundreds of seizures a day for some patients. Many are forced to adopt significant changes — wearing dark lenses or welder’s glasses, and a hat to block the light, moving to cloudier climates, and forgoing basic activities, such as outdoor pursuits or driving a car. Epilepsy medications typically don’t help these patients.

Precisely how many people suffer from the disorder is unclear, doctors say, because Sunflower is often misdiagnosed. It’s not something patients are thought to outgrow, but learn to cope with using lifestyle changes.

The syndrome has long mystified researchers. Medical journals from more than 50 years ago mention patients with odd hand-waving seizure behaviors. Then in 1983, a South African researcher coined the term “Sunflower syndrome” in an article about her patients.

Many doctors believe patients with Sunflower syndrome induce their own seizures by creating a strobe-like effect of the light with their hand-waving. Dr. Raman Sankar, a pediatric neurologist at the University of California Los Angeles, said it produces a pleasurable self-induced “high.” He believes that’s why some treatments, such as antidepressant drugs and cognitive behavior therapy, haven’t worked well.

“It’s like being a diabetic and taking medications, but then you can’t binge on sweets,” he said.

But Thiele disagrees. She said her latest work measuring brain activity in Sunflower patients, which has not been published, shows only a fraction of a second elapses between the start of the hand-waving and the onset of the seizure, not nearly long enough for the action to create a seizure. It demonstrates, she said, that the waving is part of the seizure and is not provoking it.

She said many of the patients she has seen were initially misdiagnosed as having a tic disorder.

“Most of these kids, after hand-waving, feel dizzy and don’t feel well,” she said. “They often aren’t aware they did it, but they are drawn to the sun.”

Thiele is launching a four-month study of 10 patients to test whether an appetite suppressant banned two decades ago, Fenfluramine, might be effective in controlling Sunflower syndrome. Fenfluramine, often combined with another medication and sold as a popular diet pill known as Fen-Phen, was pulled from sales after reports the drugs caused significant heart damage.

But Fenfluramine was not banned in Belgium, and researchers have demonstrated that low doses taken for years have significantly reduced seizures in another drug-resistant form of epilepsy, Dravet syndrome, without producing heart damage. Now, federal regulators are considering whether to allow Fenfluramine back on the market to treat Dravet in the United States, possibly preparing the way for Sunflower patients.

Paven, who is on the waiting list for Thiele’s study, said she hopes Fenfluramine works, because Sunflower syndrome has significantly affected her life. She has not learned to drive, for fear she will have a seizure behind the wheel. She wears dark glasses and a hat outside.

Even inside, she is compulsively drawn to bright lights in her kitchen, which prompt the seizures. When she experiences one, she can hear other people speaking to her but can’t understand what they’re saying.

Paven has learned to sit on, or hold, her right hand — the one that waves during her seizures — or focus on something else when she is in bright light and working with children at school or meeting new people. It eases the conspicuous hand-waving — the “embarrassing” part, as she puts it — but her eyes still flutter rapidly and roll back during the seizure.

Paven’s physician, Dr. John Gaitanis, chief of pediatric neurology at the Floating Hospital for Children at Tufts Medical Center, said some of his teenage Sunflower patients have told him the seizures produce a calming effect, though they are embarrassed when strangers stare.

He said many have gone to great lengths to block the light. One patient got his school to change its lighting to dimmer bulbs that were less likely to induce seizures. Another rode only in a car with heavily tinted windows.

He said many patients report being bullied at school because of their unusual seizures.

Samantha “Sammy” Buggle, a 15-year-old New Jersey resident, was homeschooled for two years in junior high because the bullying was so fierce. Other children said she looked like the Massachusetts-born professional wrestler and actor John Cena doing his “You Can’t See Me” move, which resembles Sunflower hand-waving.

Buggle, a bubbly teenager, is determined not to let Sunflower take over her life. She loves riding her bike and horses (with a special visor to block sunlight).

Doctors insisted for years that she was provoking her own seizures, an assertion that incensed and puzzled her and her parents.

“I don’t know I am doing it, so why are they saying I am self-inducing?” she said.

Her parents believed her, but agonized over what to do.

“As a parent it was very hard, when [doctors] are telling you over and over again . . . that it gives them a sense of euphoria,” said Janine Buggle. “We tried a lot of things, like taping her hand shut.”

Sammy Buggle, who is enrolled in Thiele’s study, and her parents were relieved when the MGH specialist assured them the teen’s hand-waving was not self-induced.

The Buggles are worried about their daughter’s future; some of her Sunflower episodes have led to full-blown tonic-clonic seizures, or what most people think of when they think of a seizure — when a person loses consciousness, their muscles stiffen, and they have jerking movements. She has tried 10 seizure medications; none has helped control Sunflower.

Paven, the Hingham teacher’s aide, said she hopes the MGH study will produce some answers — and relief.

She is planning to attend college in the fall, with an eye toward becoming a teacher, and she’s helping her new young friend, the first-grader she saw hand-waving in class a few months ago. The youngster’s parents, anxious about her mysterious behavior, were grateful when Paven stepped forward with an explanation. Doctors had told them their daughter had a tic disorder.

“I met them in June, at the end of school,” Paven said. “They just ran up and hugged me.”