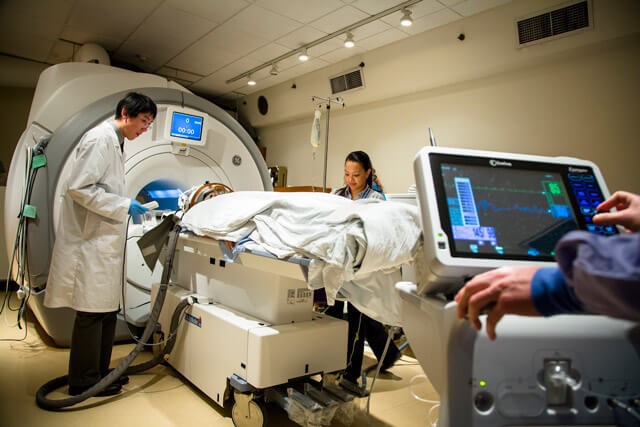 Using MRI to guide stereotactic laser corpus callosotomy (SLCC) for epilepsy treatment is more effective than using a surgical robot for the procedure, according to a study published January 22 in the Journal of Neurosurgery.

The findings suggest that there’s a way to further improve SLCC as an alternative to open brain surgery for epilepsy, wrote a team led by Dr. Christopher Rich of Emory University School of Medicine in Atlanta.

“SLCC provides seizure outcomes comparable to open surgery outcomes reported in the literature,” the group wrote. “Direct MRI guidance is more accurate, which has the potential to reduce the risks of SLCC.”

Callosotomy is a procedure that cuts corpus callosum fibers in the brain in an effort to block nerves from sending seizure signals between the brain’s two halves. The goal is to reduce the frequency and severity of astatic seizures — which include tonic, atonic, and “drop attack” varieties.

Traditionally, open corpus callosotomy to treat epilepsy has been performed through frontal craniotomy. But this exposes patients to complications such as intracranial hemorrhage, venous infarcts, bone flap osteomyelitis, and hydrocephalus and can result in lengthy hospital stays and recovery times, Rich and colleagues noted.

An alternative to open surgery is stereotactic laser corpus callosotomy based on MRI-guided laser interstitial thermal therapy (MRg-LITT). Some research has been published regarding the use of MRg-LITT for partial callosotomy to treat astatic seizures, but larger case series reports are few, according to the researchers.

To address this lack of research, Rich’s group sought to identify seizure outcomes in 13 adult epileptic patients who underwent 15 anterior, posterior, or complete stereotactic laser corpus callosotomies and to compare direct MRI guidance with a stereotactic surgical robot that places stereotactic bolts to support electrode placement. The median patient age at surgery was 29, with a median duration of epilepsy of 21 years and a median postsurgery follow-up of 20 months.

Seven of 15 patients did experience adverse events following SLCC. However, the majority of these were neurological conditions, such as mild right muscle weakness, slurred speech, and incontinence, although there was one incidence of intraparenchymal hemorrhage in a patient who underwent the robotic technique, the researchers noted.

Direct MRI guidance for SLCC offers a number of advantages, according to Rich and colleagues.

“[It] allows real-time recognition and mitigation of potential inaccuracy at any point before, during, and after placing a device into the brain … [and] mitigates inaccuracies from nonorthogonal drilling, because the laser device is guided and secured by a platform overlying a craniostomy and the trajectory does not directly depend upon the accuracy of the craniostomy or bolt direction,” the team wrote.

“Direct MRI guidance is more accurate, which has the potential to reduce the risks of SLCC,” they wrote. “Methodological advancements and larger studies are needed.”