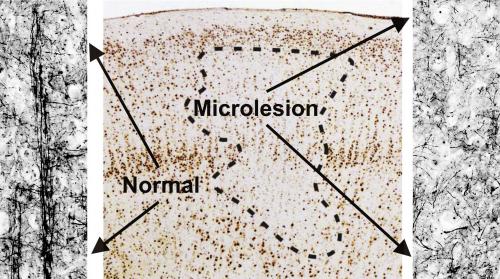 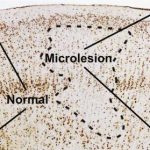 Using an innovative technique combining genetic analysis and mathematical modeling with some basic sleuthing, researchers have identified previously undescribed microlesions in brain tissue from epileptic patients. The millimeter-sized abnormalities may explain why areas of the brain that appear normal can produce severe seizures in many children and adults with epilepsy.

Epilepsy affects about 1 percent of people worldwide. Its hallmark is unpredictable seizures that occur when groups of neurons in the brain abnormally fire in unison. Sometimes epilepsy can be traced back to visible abnormalities in the brain where seizures start, but in many cases, there are no clear abnormalities or scaring that would account for the epileptic activity.

“Understanding what is wrong in human brain tissues that produce seizures is critical for the development of new treatments because roughly one third of patients with epilepsy don’t respond to our currently available medications,” said Dr. Jeffrey Loeb, professor and head of neurology and rehabilitation in the UIC College of Medicine and corresponding author on the study. “Knowing these microlesions exist is as huge step forward in our understanding of human epilepsy and present new targets for treating this disease.”

Loeb and colleagues searched for cellular changes associated with epilepsy by analyzing thousands genes in tissues from 15 patients who underwent surgery to treat their epilepsy. They used a mathematical modeling technique called cluster analysis to sort through huge amounts of genetic data.

Using the model, they were able to predict and then confirm the presence of tiny regions of cellular abnormalities – the microlesions – in human brain tissue with high levels of epileptic electrical activity, or ‘high-spiking’ areas where seizures begin.

“Using cluster analysis is like using a metal detector to find a needle in a haystack,” said Loeb. The model, he said, revealed 11 gene clusters that “jumped right out at us” and were either up-regulated or down-regulated in tissue with high levels of epileptic electrical activity compared to tissue with less epileptic activity from the same patient.

When they matched the genes to the types of cells they came from, the results predicted that there would be reductions of certain types of neurons and increases in blood vessels and inflammatory cells in brain tissue with high epileptic activity.

When Fabien Dachet, an expert in bioinformatics research at UIC and first author of the study, went back to the tissue samples and stained for these cells, he found that all of the prediction were correct- there was a marked increase in blood vessels, inflammatory cells, and there were focal microlesions made up of neurons that had lost most of their normal connections that allow them to communicate with one another. “We think that these newly found microlesions lead to spontaneous, abnormal electrical currents in the brain that lead to epileptic seizures,” said Loeb.

Loeb and his colleagues at UIC are using the same approach to look for the clusters of differentially expressed genes associated with ALS, a neurodegenerative disease, and in brain tumors. “We now have a way to predict cellular changes by simply measuring the genetic composition, with some fairly simple calculations, between more- and less-affected epileptic human tissues,” explained Loeb.

“This technique gives us the ability to discover previously unknown cellular abnormalities in almost any disease where we have access to human tissues,” Loeb said. He is currently developing at UIC a national ‘neurorepository’ of electrically mapped and genetically analyzed brain tissue for such studies.