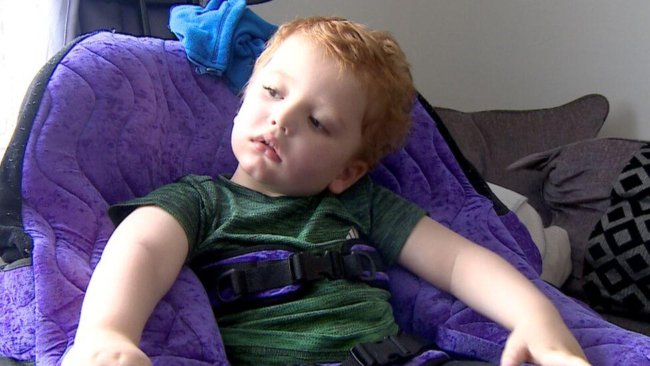 A mother whose three-year-old son has up to 80 seizures a day wants the NHS (National Health Service) to prescribe him cannabis.

Isaac, who has a rare genetic condition and is unable to walk, talk or eat, has tried 13 anti-epileptic drugs, all without success.

Leeds Teaching Hospitals NHS Trust said there were “clear guidelines” around the drug and consultants took decisions based on patients’ clinical needs.

Isaac has Lujan-Fryns syndrome, a developmental disorder believed to affect about 75 people worldwide that causes seizures in some.

Cannabis-based medicines have been legal to prescribe in the UK since 2018 for certain types of treatment-resistant epilepsy.

Charity Epilepsy Action has called for more research on potential wider benefits, but said the drug has shown “enormous impact” in reducing the the frequency of seizures in many patients.

Ms Sugden feels she has “exhausted all other options” but says she has found it “impossible” to get it on the NHS, which has reportedly issued prescriptions to just a handful of child patients

Ms Sugden says she first noticed Isaac’s condition when he was six months old and that “something was not quite right” with him.

“He never really met any milestones,” she said.

Just before his second birthday, Isaac had his first epileptic seizure, although Ms Sugden was told it was unlikely to have been the first.

Doctors at Hull Royal Infirmary were unable to control the epilepsy so his care was transferred to specialists at Leeds General Infirmary. In December 2020, tests confirmed he had Lujan-Fryns syndrome.

Ms Sugden said medics tried a range of medications but the side effects were “horrendous”.

She believes medicinal cannabis could help but has been unable to find an NHS or private doctor willing to prescribe it.

“It has worked for hundreds of children in the same situation as Isaac with rare epilepsies. Why not try it?,” she said.

NHS guidance for doctors in England says medicinal cannabis should be prescribed only when there is clear published evidence of its benefit and other treatment options have been exhausted.

Treatment courses are decided on a case-by-case basis, judging the benefits against the risks.

NHS England say, however, because that’s a “professional judgement”, it would “be inappropriate for the NHS to direct clinicians’ prescribing of unlicensed products.”

The National Institute for Health and Care Excellence (NICE) say it does not make any recommendations about the use of cannabis-based medicines for severe treatment-resistant epilepsy. But it acknowledged the need for more research, adding that it supports NHS England’s call to collect evidence from trials and studies.

Meanwhile, the British Paediatric Neurology Association, which produces guidelines for hospital trusts, say there is “insufficient” evidence of its therapeutic benefit, and that there are concerns about effects on the developing brain.

“Cannabis is a controlled drug so there is still that stigma around it,” he said. “We need research urgently.”

Ms Sugden has collected more than 80,000 signatures on a petition calling on the government to intervene and break the deadlock.

“I just want him to have that opportunity to have a quality of life,” she said. “That’s all I am asking for.”