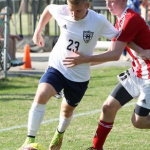 Epilepsy is one word that recent Madison graduate Nick Bezold won’t allow to limit what he does athletically.

On Tuesday night, Bezold finished his senior season of soccer for the Mustangs.

“Epilepsy is something that I have dealt with my entire life,” Bezold said. “It is unpredictable. I never know when I am going to have one. Like some, I don’t have an aura.”

Nick’s mom Julie Bezold calls soccer his escape and something that he puts a lot of energy into.

“Soccer is something that I love to do, and usually when I feel energized, it doesn’t affect me,” Nick Bezold said. “By playing  soccer, I feel like a normal teen.”

Nick and his family have tried many treatments to try to make the seizure less frequent, but most have only marginally helped.

“I have tried diets,” Bezold said. “I have tried surgery. I am on a lot of medicine that we are hoping neutralizes it.”

At this year’s race last week, the effects of epilepsy got the better of Nick.

“At the Purple Way 5K on Monday, a seizure hit me right at mile 1,” Bezold said. “You just never know when they are going to hit.”

And even though soccer is Nick’s escape, a seizure happened on the sideline earlier this season.

“This season I was on the sideline, and I just went into one,” Bezold said. “It is nerve-racking because I don’t want people to judge me. I can see it in people.”

Madison Academic’s Nick Bezold (23) keeps the ball in play against Chester County during the Best of the West tournament at University School of Jackson in Jackson, Tenn., on Friday, April 28, 2017. (Photo: C.B. SCHMELTER/The Jackson Sun)
Madison coach Chris Baker says that Nick gives every effort on the field.
“His effort isn’t matched my anyone on the team or in the area,” Baker said. “He gives 110 percent everyday. He doesn’t allow epilepsy affect his effort.  If you see him on the field, you would have no idea that he had it. He is very coachable, and he makes every effort to improve.

“It is frightening to think of the level that he could play on, if he didn’t have epilepsy.”

One victory that Nick has conquered over epilepsy is the fact that he has signed a scholarship to play soccer on the college level at Freed-Hardeman.

“Knowing that even though I had to overcome a challenge, playing in college is something that I have dreamed of,” Bezold said.

Nick says the soccer team at Madison has been supportive throughout his career, and this year, the team chose to wear purple warm-up shirts to bring about epilepsy awareness on the soccer field.

“The have been supportive,” Bezold said. “A couple of the guys came to the race. They have defended me and helped spread awareness.”