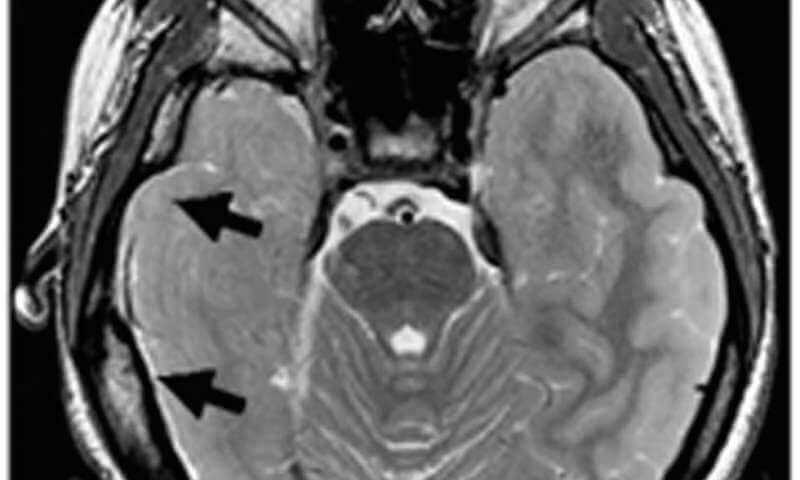 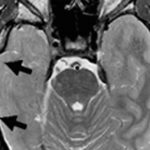 A new study in Neuron focuses on the role that a lack of the protein “CLOCK” plays in several forms of epilepsy. The study provides evidence that excessive excitation of specific brain cells may be due to a lack of CLOCK in the region of the brain that produces the seizures. This effect, researchers found, is stronger during sleep.The finding potentially gives researchers a new way to develop a treatment for some cases of the most severe cases of the disabling disorder, said corresponding author Dr. Judy Liu, a new Assistant Professor of Neurology at Brown University. Because the study directly implicates a specific protein pathway in a specific part of a patient’s brain, Liu said a strategy for further research could be to deliver a drug that compensates for the lack of CLOCK, or perhaps a protein it affects, directly in that location.  (PHOTO: Arrows indicate the region of the brain implicated in producing seizures in a patient involved in the study. Credit: Liu et. al. )This could be a viable target if we take a local and focal approach,” Liu said.

When patients with epilepsy don’t experience enough benefit from current medications, doctors sometimes treat the disorder by surgically removing the area where seizures arise. Liu, who was an investigator at the Children’s National Medical Center in Washington DC during the research, decided to study tissues removed from eight patients with either focal cortical dysplasia or tuberous sclerosis complex to see if she and her co-authors could discern what might be going awry at the molecular level. As an experimental control, they used “healthy” tissues from the patients when those needed to be removed to allow access to the seizure-producing sites.

The first step was to analyze the “transcriptome” of the tissues, or the various RNA transcribed from DNA to produce proteins. They found some significant differences. In particular they measured a notable decrease in the expression of RNA for CLOCK compared to controls. Further analysis including in tissues from more patients with other forms of epilepsy also showed that CLOCK RNA and protein were often significantly lacking in both in excitatory and inhibitory neurons in affected brain regions.

The researchers weren’t looking for CLOCK per se, Liu said. It just stood out as especially significant across multiple forms of epilepsy in patients.

“This was an unbiased screen,” Liu said. “We were hoping to find targets we can use for therapy and we were also trying to figure out molecular differences in different types of epilepsy. But the effect on CLOCK was so consistent we didn’t manage to stratify different causes.”

To understand how the lack of CLOCK might relate to epilepsy, the team created two mouse models. One genetically “knocked out” CLOCK in excitatory neurons and the other knocked it out of inhibitory cells. The mice with loss of CLOCK in excitatory neurons displayed symptoms of epilepsy very similar to the human patients, including greater susceptibility to seizures, particularly arising out of sleep.

That association does not seem to be a coincidence, Liu said. CLOCK is an acronym for “Circadian Locomotor Output Cycles Kaput,” because it is a central regulator of gene expression related to the body’s circadian rhythm of sleeping and waking. Expression of other associated proteins in the pathway were also reduced when CLOCK was missing.

The researchers performed further experiments in the mice to look for differences in the affected brain cells and the circuits in which they were connected. They found that the excitatory neurons lacking CLOCK were not inherently more excitable, but they received significantly less inhibitory current than similar cells in the same region in healthy controls. In other words, excitatory neurons lacking CLOCK aren’t as effectively restrained as they should be, potentially leading to a lower threshold for the onset of seizures, the researchers found.
Liu acknowledged that study does not explain why disruption of the CLOCK pathway reduces the inhibitory current within the cells after it arrives via their connections, or “synapses,” with other neurons in their circuits.

“That’s a great mystery at this point,” Liu said. “It could be because the inhibitory synapses are affected, and there is some evidence that’s the case, but also the activity of a certain subset of inhibitory neurons could be altered.”

Keep it local and focal

Still, after 15 years of treating patients with epilepsy either with oral medications that don’t always work but sometimes have side effects, or with surgery that requires removing brain tissue, Liu said she is eager to find a better approach. With much more research, she said, perhaps she and colleagues can develop a treatment that is as local and focused as the disease itself.

There are already some small-molecule compounds that target circadian pathways, Liu said, but the drugs need to be delivered to the site.
“My idea of what epilepsy therapy should look like is we do the same mapping to figure out the seizure focus and then we treat the focus itself,” she said. “We have neurosurgeons who can access the tissue, we have drugs. We need delivery systems that can target the drugs.”
Other directions for future research, Liu said, include looking at the role of CLOCK in more forms of the disease, learning more about exactly how CLOCK affects neural circuits to disrupt adequate inhibition of excitatory neurons, and examining whether any of the genes that CLOCK regulates are especially important in the disorder.

“Our idea is to hone-in as much as possible on targets and refine therapies and make everything as focal as possible, both in terms of the genes and proteins as well as the spatial delivery,” she said.