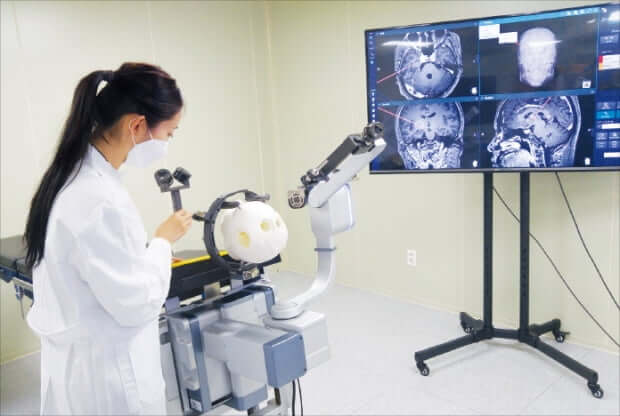 Koh Young Technology Inc., a 3D inspection device maker in South Korea, has commercialized a neurosurgical robotics system for the second time in the world that is likely to challenge established rival products with increased accuracy and shorter surgical time.

After winning approval of the Ministry of Food and Drug Safety in 2016, Kymero has undergone two-year clinical trials at Yonsei University’s Severance Hospital in Seoul, one of the country’s biggest university hospitals, the company said early this month.

Starting from August, Kymero will be used in neurosurgical procedures at Severance Hospital of deep brain stimulation, 3D electroencephalography (EEG), biopsies and shunts, as well as in the operations for Parkinson’s disease and epilepsy.

In terms of accuracy, its margin of error has decreased to 0.98mm after the clinical trials.

Koh Young, with employees of about 500, plans to market the new robotic system in the US around 2022. It will file an application next year for approval of the US Food and Drug Administration (FDA).

Kymero consists of two parts: the “navigation platform” that guides the surgeon to the exact location of the lesion and the pathway to the area through the brain and the “automated stereotactic system” equipped with robotic arms that help the surgeon achieve precise positioning of the operations.

In detail, CT or MRI brain images of a patient are uploaded into the navigation platform that then provides a 3D view of the optimal surgical site and the pathway toward it on a screen. Simultaneously, a scanner on the operating table measures the patient’s brain in a three-dimensional coordinate system and obtains the appropriate target coordinates.

Then the robot arms mounted to the operating table point toward the exact location of the lesion and the pathway with laser beams and pencil-shaped instruments.

The core technology of Kymero is matching the data registered into the navigation platform with those from the 3D scanner to discover the exact surgical site and the pathway.

A researcher is conducting tests on the Kymero neurosurgical robotics system.

Kymero is the second commercialized neurosurgery robotics system in the world after ROSA developed by France-based Medtech. ROSA won FDA approval in 2007 for use in brain and spine surgery.

The Koh Young CEO noted that Kymero is even more precise than the rival product that finds exact coordinates only in restricted circumstances.

Medtronic’s Stealth Autoguide platform is FDA-cleared for use in biopsy procedures, stereotactic EEGs, and laser tissue ablation, similar to those of Koh Young’s system.

“Medtronic is an industry leader in surgical equipment whose biggest advantage is its ability to provide packaged sales of medical devices related to neurosurgery,” Kim said in a research note published on June 3.

“We think competition will largely depend on whether Koh Young can gain an upper hand in markets outside the US.”

Medtronic, founded in Minneapolis in 1949, generates most of sales from the US market and has a market cap of $126 billion. In comparison, Koh Young’s market value is just $1.1 billion.

Other surgery robotics manufacturers in Korea include Meerecompany Inc. that rolled out the laparoscoptic surgical robot Revo-i in 2008.

The global medical robotics market is projected to reach $13 billion by 2020 from $4.2 billion in 2016, according to WinterGreen Research.

Koh Young expects to secure millions of dollars of orders in the neurosurgical robot market estimated at around $2.5 billion in size.

The Mirae Asset analyst estimates the Kymero robotics system to be priced at the 1 billion won level.

Its level measurement equipment has been provided to 2,500-odd companies worldwide and takes a global market share of 53% as the biggest supplier for 14 years in a row.

Jinwoo Jang, professor of Yonsei University’s medical school and neurosurgeon, had led the clinical trials for Kymero between 2016 and 2018. He is an expert of stereotactic brain surgery.

“The introduction of Kymero will cut in half the time neurosurgery takes at local hospitals and significantly increase the surgery accuracy,” he said.