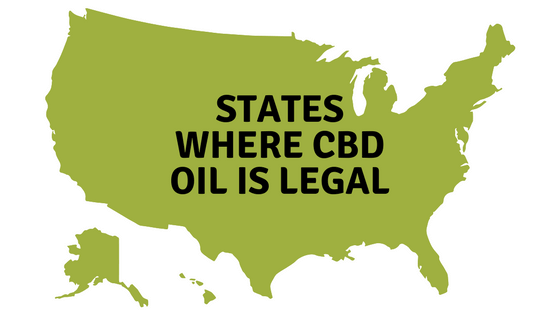 CBD oil has exploded in popularity lately. Where is it legal, what are the exceptions and what is the future of its federal legality?

As the push for legal medical marijuana turned into one of the more universally popular stances in the country, advocates have been pushing for more states to legalize cannabis entirely.

While only 9 states currently have legalized recreational marijuana, as an industry weed has had a huge year of growth. This is in large part due to the increasing popularity of products that contain CBD in them. CBD, short for cannabidiol, is one of the hundreds of compounds found in the cannabis plant, and the potential it has shown in helping with pain, seizures and anxiety have made it a natural fit for medical and recreational weed alike.

The most commonly used form of CBD is CBD oil. Combining CBD extract with a carrier oil like coconut oil, it can be ingested or vaped, bringing a lot of variety. But because marijuana legalization is in such a murky situation with both federal and state laws to grapple with, CBD oil’s legality can be hard to parse depending on where you are. Let’s start with legality at the federal level.

Despite the many states that have legalized some or all forms of marijuana, federally the U.S. Drug Enforcement Administration (DEA) continues to classify CBD as a Schedule I drug. Schedule I drugs are defined by the DEA as “drugs with no currently accepted medical use and a high potential for abuse.” This is how not just CBD, but the entire cannabis plant is classified.

Of course, because legal marijuana is in such a confusing transitional period, even here there are potential exceptions. The U.S. Food and Drug Administration (FDA) approved Epidiolex, a treatment for a rare form of pediatric epilepsy that contains CBD. The DEA decided to classify this as a Schedule 5 drug, the scheduling that indicates the lowest potential for addiction and abuse.

Hemp producers who sell CBD products will often use the 2014 Farm Bill to claim that it is legal. This bill includes a provision that allows for the legal cultivation of hemp provided it is used for academic agricultural research or under a state pilot program. But there is still confusion about whether the legal allowance for cultivation also includes selling it.

The DEA hasn’t made going after CBD users a priority, but generally federally it remains illegal. You’ll have to go on a state-by-state level to see if CBD oil is legal where you are.

The push for legal cannabis has made enough progress that now there are only three states where marijuana of any sort in any form continues to be completely illegal. Those states are:

If you don’t live in these states, you may be able to acquire legal CBD oil. But each state has its own specifics you need to be aware of.

States Where Marijuana Is Fully Legal

Currently, there are 10 states in America where marijuana is legalized both medically and recreationally. This does not count Washington D.C., which also has full legalization.

These 10 states with legal cannabis are:

Michigan is the most recent state to legalize marijuana after state voters easily voted for the ballot initiative in the 2018 midterm elections.

In these states (and D.C.), simply go to a dispensary and you will be able to purchase CBD oil legally – provided you are 18 or over.

States Where Medical Marijuana Is Legal

In addition to the states with legal recreational weed, there are 23 other states where it is legal but only at a medical level. Those 23 states are:

Whereas Michigan already had medical weed legalized to make for a quicker route to starting full legislation, these states don’t yet have an operational system in place. North Dakota and West Virginia also still are not operational yet, nor in Louisiana or Arkansas. Ohio is also behind schedule, having been unable to meet their goal of having operational dispensaries two years after voting for legalization. And until those are operational, the Ohio Board of Pharmacy ruled that any CBD products not sold in dispensaries licensed by the state’s program are illegal.

While in all of these states recreational marijuana remains illegal, Connecticut, Delaware, Illinois, Maryland, Minnesota, Mississippi, Missouri, Nebraska, New Hampshire, New York, North Carolina, Ohio and Rhode Island have all decriminalized the drug. In these states, having smaller amounts of marijuana on you won’t lead to an arrest or a criminal record. The maximum amount you’re allowed to have on your person will vary by state.

States Where Only CBD Oil Is Legal

That’s a whopping 33 states where, operational or otherwise, some form of marijuana is now legal. Add those up with the 3 states where it is completely illegal, and you’re left with 13 states.

The laws in these 14 states can vary widely, but to differing degrees, medical cannabidiol can be allowed for legal use there. Many of these states have very strict rules for who can and cannot get approved for CBD based on what medical condition they have the severity of it.

Here are the 14 states with some form of legal medical CBD and what the requirements are, per the National Organization for the Reform of Marijuana Laws (NORML):

What Would the 2018 Farm Bill Do for CBD Legality?

In 2018, the Senate introduced a new Farm Bill to update laws around the previous one. One important part of that bill, should it pass, is that it would legalize hemp on a federal level.

Hemp being federally legal would be huge for the CBD industry, as CBD oil made from hemp extract (a plant that has very low amounts of THC) would be legal. A new, more available form of CBD would also allow for more research on the subject of cannabidiol, and perhaps the entire marijuana plant. More research brings the potential of coming closer to full legalization.